The CinD-LOU project is looking for two wheelchair batteries and a
laptop PC.

We think the two wheelchair batteries we have won't hold a charge and
are dead. Can anyone confirm this for sure? They are MK model
M22NFSLDG deep cycle GEL type 12 VDC batteries. Web prices look to be
about $160 each.

The laptop could be almost anything, even used and several years old.
It will hold the executive ROS (Robot Operating System) http://ros.org/wiki
code and be the host for the Kinect. It would start out as a bench
test and then move on-board as autonomous motion progress is made.

Any and all commercial sponsors, angel benefactors, creative dumpster
divers, and/or crowd-sourcing pledgie contributions are welcome and
could be a tax-deductable donation towards this very worthy
educational cause.

I don’t know what happened to them, but I brought down about half a dozen PIII era laptops. Any of them would be fair game.

If you have a friend that works at an auto parts store, take the gel cells up there and throw them on their charger/tester. You might have to ask nicely/know someone since they’re obviously not car batteries, but those chargers are beefcake and they have pretty decent diagnostic circuitry in them to detect wiped out cells.

There’s a large stack of very nice and barely used (but several years old and left uncharged so maybe in the same state as yours) 12V sealed batteries next to my cabinet you are welcome to use.

Thanks for the replies. We'll follow-up. Ask and ye shall receive...

if they don't pan out; talked to my battery guy, he suggested if its
not going offroading (just around the hive), to go with normal sealed
lead acid, PS12550, less robust, but higher mah per cell. his price
was $130ish, maybe less, with pick up in Harrison, stocking mid next
week. talk to ian @ 513.673.3630 if you need more info.

I have a Pentium II laptop in my locker (one of Dave B’s old ones, I think) that may be sufficient for ROS, however, I’m almost sure it will be too slow for a Kinect. But if you’d like me to set up Linux & ROS on it just so you have something to test with in the meantime, let me know.

Thanks for the offer to help! DaveB said he had PIII's at the hive
that might be better than a PII, but whatever will work. We need to
check with Craig about getting the Kinect back in.

Yes, we'd like to have a bench test setup targeted to end up on the
mobile CinD LOU platform. We'll even manufacture a deadline to get
bonus points and have something to demo at the HIVE July 21 party.

Here is a basic team plan for now (with future growth potential):
(1) We want to start to investigate what the Willow Garage open-source
ROS package can do. We may get some publicity, notoriety, and
personal growth by linking into this effort as a maker space.
(2) Visitor Rich is leading the effort to get working wheels under
CinD LOU. The first implementation will be line following (for the
party), but we want to advance beyond that. There is serious work in
motion planning that would be cool to link into. With an onboard
laptop kinect, digital compass, some anti-collision sensors and
serious effort CinD LOU could be safe to go off-line (pun intended)
and freestyle around the room. Yes, this is a stretch goal.
(3) A good first (short term for the party) goal for the laptop/kinect
connection would be to empower the CinD LOU head/neck eye tracking
features on the stationary disjointed head. We are working to have
two neck motions (turn left/right, nod up/down) and two eye motions
(left/right, up/down and add blinking eyelids) in time for the party.
Rather than just exercise these motions in a static control loop, it
would be creepy/neat to have the laptop kinect sense a person (ex: 5
ft away, 30 degrees left of center) and post serial data updates to
Brent's BeagleBoard to trig out the math and drive the PWM R/C servos
to have the head and eyes track the person's movements. This is also
step one to bigger and better next steps.

Anyone else interested in helping to make (3) happen in the next four
weeks?

I’m out of the are until the 30th but I can bring in the kinect. If you want to do face or eye tracking that is usually done with the OpenCV library and is independent of the Kinect. Any webcam will do this, the kinect is good and determining distance so that will be useful when programming the driving portion. Go ahead and start coding using a regular webcam until I get back because the OpenCV library just treats the kinect as a standard webcam (this is because the analysis is done frame by frame as if it was a picture)

I recommend installing OpenFrameworks if you want an easy integration into programming visual systems. Although CodeBlocks is a bit of a memory hog, it is best if you can get the development kit (Codeblocks) on the same machine or at least the same architecture as your target (the laptop in this case)

I have a Logitech USB webcam that is fairly decent you can have if you want it. Email me if you do.
-D

Hodapp, if you're still into leading this part, it would be great to
pull together a laptop with DaveB's webcam and Craig's software
suggestions that could communiate to Brent's beagleboard and the head
action R/C servos we will mount with makerbot bracket parts. Let's
discuss on Tuesday night.

Stopped by the HIVE Saturday. LOTS of folks were there working and
playing in the comfort of the new AC. Took the two batteries out of
the wheelchair and also two batteries from Chris' stash. The battery
store did a test and said the two wheelchair batteries were dead, and
Chris' two batteries should work OK. I've got them on the charger now
and we'll see what they can do by Tuesday night.

Also does anyone have a spare Ardunio to use short term or long term?
We had troubles loading the Mega last week and are looking for an
alternate Tuesday night and perhaps beyond.

Yes I have a have a mega 2560 I can donate. I was going to experiment with, but I whiling to donate it to the hive for your project. I can drop it by this afternoon. I work nights 6pm to 6:30am, so this is the only day I can help out.

Will anyone be at the Hive this afternoon? To receive the 2560 and a Dell laptop Latitude D630.

What time? I may be able to in the next few hours

Steve’s laptop and mega are in my cabinet, second shelf from the top. We should have a Dell charger for the laptop somewhere

Steve you rock, thanks!

i have over9000! dell chargers if you need one.

THERE’S NO WAY THAT CAN BE RIGHT! 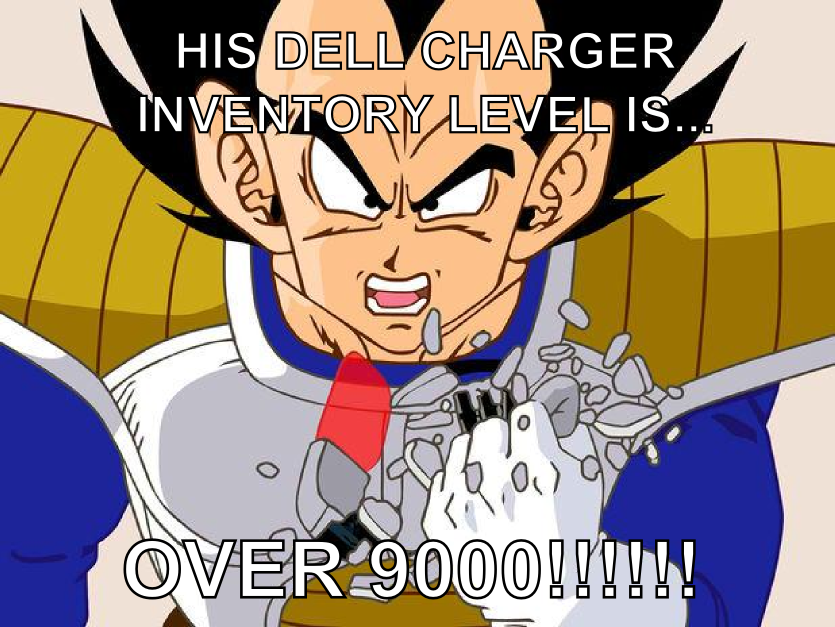