After some of the discussion on Tiff’s 3D printer, I was thinking it might be nice to get a Hive owned 3D printer for the FabLab. The Ultimaker that Lorin has loaned us seems to be working pretty well but could be removed if Lorin needs it back.

I would like to see the Hive be more independent with the larger tools.

I have been getting an I3 Duplicator plus going at my house. It has a build volume of 200x200x180. After the upgrades it seems to be pretty robust. I don’t like the manual bed leveling though, I would suggest one with an auto bed leveling setup.

I could chirp the different vendors, perhaps we could get a nice discount or even a free unit.

This isn’t a vote yet. Just a thread to talk about the ideas.

It looks like the sweetheart space is the Prusa I3 MK3 (the latest version of the I3)
The reviews speak pretty highly of it and it seems to check all the boxes. 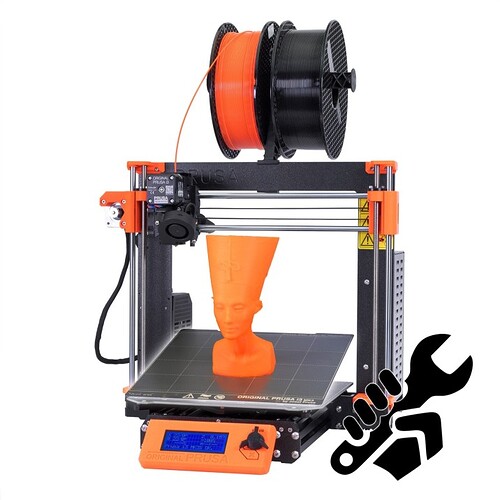 The Original Prusa i3 MK3S+ is the latest version of our award-winning 3D printers. We have upgraded the MK3S with a brand new SuperPINDA probe for improved first layer calibration, added high-quality Misumi bearings and made various useful design...

It is around $750 for the kit but probably won’t ship till Feb.

The MK2S is the current favorite and is also very available.

I think we would want to keep the system open. I don’t like the closed versions with the chipped filament supply.

I bought the ultimaker expressly to live at hive for hive. I simply take care of it when it craps out, and have taken it off site to do community teaching activities.

I can add an auto bed leveling probe to it if you’d like. I chose the ultimaker for hive due to its reliability as a shared machine.

I think buying and sprucing up the anet would be good too.

First I agree to the idea a Original Prusa coming to the Hive, the Mk3 is completely worth the wait, i own a mk2s currently, and it has worked like a boss.
I want to mention another thing: The Ultimaker is owned (Jointly) by the hive. Has this changed?

This quote is from the email “wow prints” sent by Lorin on 11/21/2015 "New ultimaker 2 – purchased with Shroff foundation grant to be joint UC, Community education, Hive13 ownership. It’s tuning up nicely. Still tweaky – these need time to settle and careful attention to tension and bowden feed, as well as nozzle upgrades – otherwise, in a lab setting, they chew the filament and jam easily. "

In July he mentioned this again in his bio for board: “'i’ve also written a few grants that benefit Hive13. The most obvious is the grant that funded the Ultimaker.”

it didnt seem to be getting much use at the hive.

also, the hive owns the gigabot. not sure we should spend that much money if the cirrent 3d printers arent used all the time. however, id be in favor of it if it was a different type of 3d printer.

I would love to see a resin printer come in, but use for that material is not cheep, and would really require a dedicated member or team to monitor use.

I have seen the Ultimaker getting used fairly often.

resin printer would be awesome - maybe something from Form labs?

If you don’t want the ultimaker, let me know. I can find another home for it.

As far as the grant goes:

The Ultimaker was purchased with grant money that was designated benefits for my research & teaching, hive13, UC’s community outreach programs, and the the greater cincinnati community (breakthrough cincinnati and others). UC’s involvement was to support 2 years of pilot courses in which my students became members and used hive13 as a resource. Those courses are over, and now UC is building their own makerspace to support courses. So, as of this September, UC is no longer involved. Furthermore, the formal obligations of the grant have been fully met within this 2 year period and are already published on record. There are no outstanding obligations.

So, as the PI, I could designate remaining resources to any project which meets the mission set in the grant. This could include my current research work in sustainable technology, community endevours at hive, etc. So, there is only one real condition, which is ethical in nature: the grant was designated to support philanthropic efforts, and community growth / empowerment. As long as Hive continues in its outreach mission, there is absolutley no conflict with hive13 retaining the ultimaker or other tech from this grant.

I am concerned though, by recent discussions which seem to suggest that hive13 is no longer as interested in outreach as it once was. If this is the case, then I would be obligated to find another home for the Ultimaker.

TL;DR The grant period is over, and UC is no longer involved. As I am the PI, I designate where assets are allocated or used. Best analogy would be that Ultimaker belongs to my business – it is not my personal property, but I do have the last word. My intention was to locate it with Hive13 indefinitely, but recent threads are giving me pause…

Our several years of Learn to Solder outreach demonstrates that we are dedicated to outreach. There has been discussion lately of expanding that to a mentorship role of training teachers.

I was a little concerned by comments at a meeting that implied teaching kids to solder is a waste of time since they can’t become members. I think those comments were due to the perception of recruiting kids who can’t become members. That would be a waste of time. Outreach to the general public by sharing skills and knowledge and organizing events and happenings is what I understand to be some of our goals. When makers, artists and artisans see us doing cool stuff they will be interested in participating. However, outreach isn’t our only goal and I don’t know if the level of engagement is defined.

I guess I should always count on our discussions getting exciting (and sometimes off track).

For clarity on my part, I was proposing we get another 3D printer for the Hive and wanted to begin discussion before proposing a vote for funds.

I know Lorin brought the Ultimaker in for us to use but I didn’t know the status. I think the Gigabot is a bit picky and hard to use.
I think having a robust 3D printer setup for people to use would be a nice addition to the FabLab.

The rabbit hole of outreach by the Hive is getting a bit weird. I don’t think anyone said we shouldn’t do outreach. The only comment about kids was that the Hive is not setup like iSpace and couldn’t host a gaggle of kids. I think the whole outreach activities by the Hive have been on a strictly volunteer basis and rarely tie up and Hive money. Any money that has been spent, has been voted on by the group. Anyway, that is a separate discussion.

People love to put in their 2 cents and the board provides them a place to express their views. People also need to think about how they express their views and how others may take their comments. (Welcome to “real life”, you may actually meet/encounter the people you are chatting with on the board).

We can have some actual discussion tonight in the meeting.

Sorry, I just reread my earlier post. I wrote it during a meeting a work that was a bit stressful (budget stuff).

I think my choice of words may not have been the best.

We need discussion about how people feel about the Hive and what we do.

There are no wrong opinions and different people express things differently.

So please don’t take anything I said the wrong way and let’s have some more discussion tonight.

My mind is completely blown by this unnerving paradox and resultant tear in the time-space continuum. How could past me do this to future me? Oh no, my brain, it hurts!! /s

Daniel, I don’t care about any of your concerns, they are rrelevant. You are being extremely rude. Regardless of whatever amazing faults of character, contradictions, and misrepresentations I have presented over the years, the fact still remains:

I bought the Ultimaker 2 and left it at hive for anyone to use. I fail to see how this is a problem or liability for anyone except me. A few people have thanked me. What the hell are you doing?

Don’t look a gift horse in the mouth.

Someone start a new thread about 3D printers if we need one, this one has derailed…

I have to say Lorin has been EXTREMELY HELPFUL with everything ultimaker at the hive. Numerous people know how to run it and show others as well as its reliability from modifacations. I own an ultimaker as well and he has gone out of his way huge with even helping me get mine running better along with Ryan. Then on top of the countless time he has taken to put into its functionality the there is also the monetary out of pocket things he did to improve it a ton have to be noted. Not only was it fixed after being well roasted a few times over but it was even improved to help take human errors or errors in itself.

I have my ultimaker apart right now however when I get it back up and going I can bring it down for the saturday funday 3d printing days again. I would be up for us getting a nice open source printer of some type. Auctions may treat us well as tiff has noted.

Lorin: again I do apologize for the Autocorrect mistake on your name (for the second time.) I am not saying you havent put work into the Ultimaker, or did the paperwork to get it, which has been appreciated. But when it was placed in the Hive, you stated it was Owned by the hive, to quote: "“New ultimaker 2 – purchased with Shroff foundation grant to be joint UC, Community education, Hive13 ownership.” No where did you say you would be the owner of this machine.
I wanted clarification. I asked about this, you avoided the question, I asked again, (yes with autocorrect typos, but the point still stands.) So right now, I am asking when did this change? You are saying you owned it from the beginning, if you want to make it an argument, I am now stating the hive owns it by your own statements from the beginning. I have the emails, this isnt coming out of thin air. I was trying to be polite about it. but hey call me rude, I am sorry if I hurt your feelings but I rather be blunt and have a clear answer on why it was stated as Hive13 ownership if thats not the case.

Kevin: i know you are man, one hell of a typo eh? But hey apparently politicians have got away with worse. I have a UM3 now, and it runs like a champ, but its slow compared to my other printers.

Any time I have given a tour of the Hive I have always introduced the Ultimaker as a machine that was on a long term education loan. I never thought of it as Hive property and I doubt other people do.