[vote] Budget for a lathe

Two years later… Let’s vote on a budget for buying a lathe!

Two years ago we frequently discussed buying a lathe and just never got around to it. I did some research back then (https://wiki.hive13.org/view/Lathe_purchasing_checklist) and would like to do a bit more research with others (Brad is helping so far).

From the initial research I would like to propose a $5,000 budget for buying a lathe. This is more than we had originally discussed, but the larger budget will let use get a lathe with a built in DRO, coolant, higher speeds, larger etc. All things that I think we will be glad we have in a year or two when we don’t have to hack them on.

I am going to look around more this week and talk to a few others just to make sure there isn’t anything better for the value.

One detail I forgot to add:

This vote will be happening at the March 21st meeting, not the 14th.

I’m all for this, I recommend bumping this up to maybe 6000, so we can also buy lubricant and other accessories that may not be included.
Grizzly is a solid brand, and this looks like a beast of a machine.
Either way I vote yes.

That Grizzly G0776 looks like a solid (big) lathe. The Grizzly head honcho is an avid gun guy, I think that is why they carry “gunsmithing” lathes.
It weighs in about 1200 pounds! Do we know where it would go?
The price with the DRO and cabinet is very good. Enco has a similar model without the DRO for more $, but they always have those coupons.

I agree that we should also get some accessories/supplies with it. (live center, carbide cutters, coolant, oil, etc.)

We are getting ready for a vacation (leaving Wednesday returning Tuesday) so I may not be able to make the next two meetings. I will be down this Sat though.

I vote yes on a $5K lathe purchase.

Got some more info from the Grizzly website. I downloaded the manual and the spec sheet (attached).
Manual: http://cdn0.grizzly.com/manuals/g0776_m.pdf

Once it gets ordered and we have a delivery date, we should do some planning on the space, weight, power (220V 15A doesn’t look to come with the cord or plug), etc.

I’m assuming the floor is OK. Wasn’t the building an old casting factory? We might have to reinforce the floor with some steel plates. Then we will have to level the lathe.

I’m not even sure how we will get it in the Hive! Looks to be 1280 pounds and 75"x31"x58". Don’t know if it could be put in the welding room.
Might have to rearrange some stuff in the general work area.

Good problems to have.

The actual weight will probably be a couple hundred pounds lighter than that. The shipping crates add a good bit of weight overall.

Power is super easy since the breaker box is in the same room this will be going in. At ~1000lb I don’t think we need to worry about the floor (think about six of us standing around talking… :)). If it were 2000+ I would probably start thinking about it. Do you mean reinforcing just so it doesn’t sink in to the wood?

Yeah I guess I don’t know what the feet look like. If they are pretty large then it will probably be OK. If they are small then we may want to make some larger steel pads for it to sit on. Would hate to have it settle into the floor and get twisted.

Might be a good idea to make a cardboard/wood outline box to see how it would fit.
We had some adventures with a largish refrigerator that we had to cut away part of a wall to get it into the kitchen. (Sawzall to the rescue).
I’m thinking we will have some time to work on this.

Not sure if you heard but the SF Maker Faire is backing out of us going. Something about budget and space.

Jim is going to try and work out the reasons and try and get the nonrefundable ticket money back if we really aren’t going.
I already put the plane ticket on my credit card (along with most of the rest of the group).

All - Brad just worked in a bit of a mixed message on this thread (Lathe vs. PTDR). FYI All - We got the unexpected/latest Maker Faire email last night. It is not over till it is over. As Brad said, we don’t yet know the true driver for this change and are contemplating our reply. The majority mood on our team seems to be to counter with a lesser plan B win/win option and see if we are still in at a lower target. Don’t jump to conclusions yet and stay tuned for further details.

Grizzly said they could offer a $275 discount, but I had to add $500 worth of tools to the order. I added a wood lathe to the order since it was about the only reasonable thing I could find. I think we should pass on this, because we can find a nicer lathe locally for a decent price.

If no one has any objections I’ll just get the metal lathe ordered.

We might want to get some accessories for this. 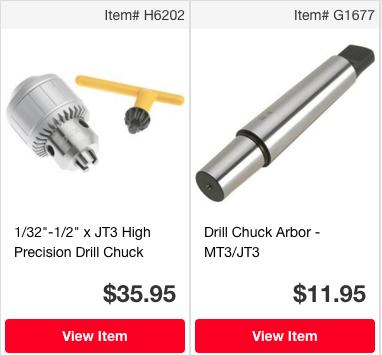 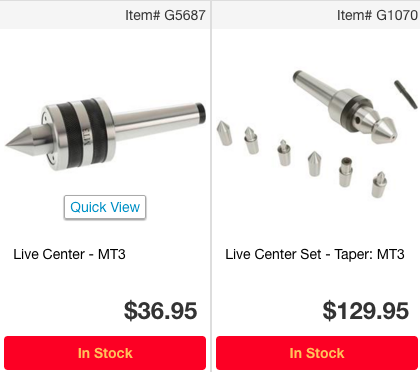 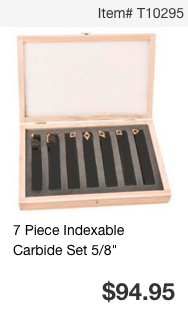 Looks like the tooling holder included can hold up to 5/8" tools.

Excited to get a “big boy” lathe.

We already have a 1/2" MT3 drill chuck. We have an MT3 dead center as well, but a live center probably isn’t a bad idea to look in to.

I would prefer not to buy tooling. I’ve always thought that was a bit much to provide, as tooling is extremely easy to break and is pretty pricey to have break all of the time. I want to hear other people’s opinions on this, as it doesn’t really get discussed all that often.

Sure, let’s talk it tomorrow at the meeting.

In the real world, application tooling is a significant addition (20-50%, or more if custom) to a lathe or mill purchase.

On a lathe, standard tooling like collet sets, centers, tool holders, boring bars, 3-jaw and 4-jaw chucks are all part of a starter kit. The list goes on with steady rests, knurling tools, and such. Each new doo-dad adds a new capability to the basic machine, based on what you want/need to do, which become increasingly specialized with diminishing returns.

Self Ejecting Chuck Key/Wrench. After seeing a chuck key go through a solid wall, I would just lock up any non-safety keys… That’s the #1 novice lathe injury.

Otherwise I agree with Jim. My little precision lathe has lots of tooling add-ons. Live center is nice, but I tend to use a good dead center much more. Only thing I use more is collet set – but most of those uses are about high precision work in metals like stainless.

I agree with Lorin.

One absolute MUST: Self Ejecting Chuck Key/Wrench. Just lock up any non-safety keys.

Also a safety course (though not a guarantee (from Matt Kenney at Fine Woodworking):

Yale University was the site of a tragic metal lathe accident in 2011.

The student was using a metal lathe in a shop where students and professors are able to make instruments for experiments.
Evidently, her hair was caught by the lathe and pulled her toward it. An autopsy by the state of Connecticut medical examiner
determined that she died by “asphyxia due to neck compression." By all accounts, she was a safety conscious student, and
all who used the shop were required to complete a semester long “shop course” before they could use it.

Even the most experienced user lets his/her guard down from time-to-time.
Maybe you’re tired after a long day or perhaps you just don’t feel like taking that extra moment to set up a safer jig.

This young woman’s death should serve as a reminder of why vigilance and consistency are so important in the workshop.)

And maybe a checklist on the machine for the qualified but less frequent user. (Pilots use them every time, even when it’s a daily job.)