Thanks to the people that have helped out getting it to this stage!!! Here’s some proof that it all works!

Here are 2 of the videos we took while testing the Trebuchet. I have a lot of additional videos that I can provide, if anyone wants to try some adjustments on it for firing. a few spectacular failure videos as well.

It currently throws right around 55 feet with a good looking arc. I haven’t measured the exact angle yet, but I’m guessing around 35 degrees. 45 is the optimal release angle, so some additional changes to the sling length and pin angle could be done if someone wanted to try it.

I’m willing to help anyone that wants to take that on. As a reminder, we will need someone to shepard this at the Maker Faire because I won’t be able to attend the event.

I was at the Hive Sat. I missed where you were going to be.

I’m going to try and be at the Maker Faire all weekend so I can be a point contact. We have a mini van so I think I can transport it.

We should get a portable basketball hoop thingy.

I’ll be at the meeting Tuesday.

This is really cool. How does it wear pants? 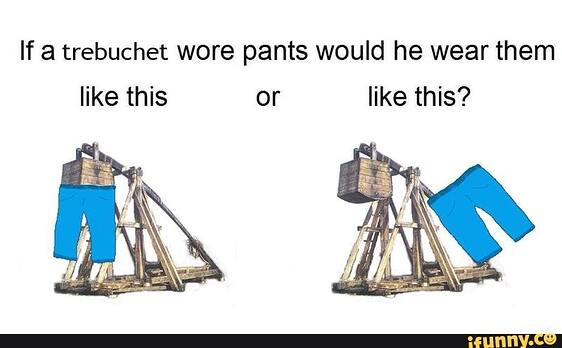 Obviously the first one (Duh). 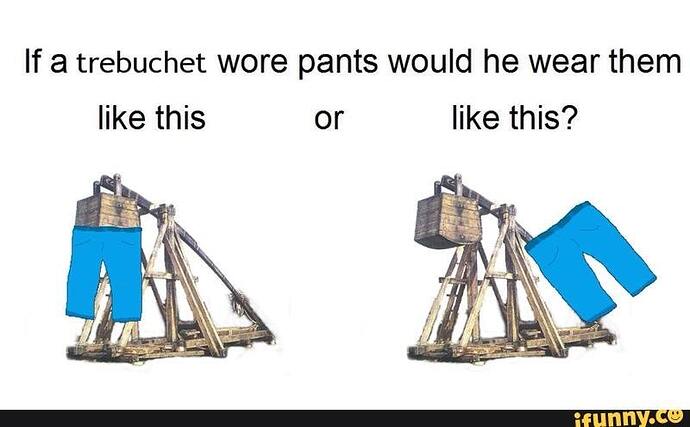 Pfffttt Who the hell wears pants while RAIDING !!! 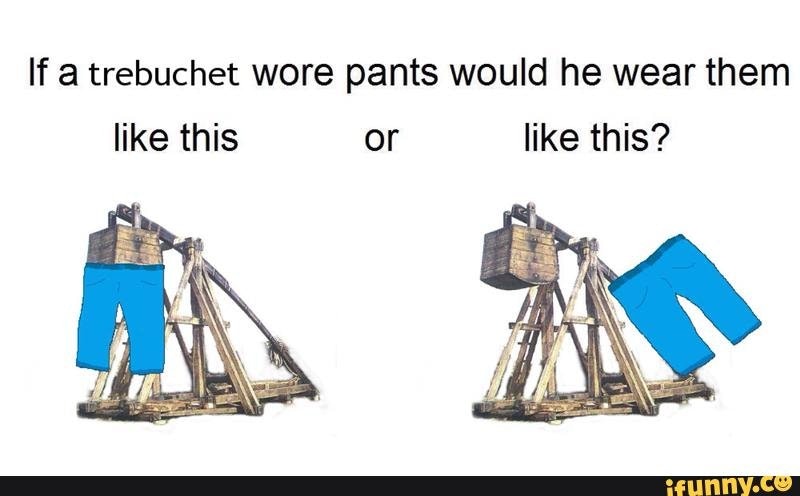 of course the first way, that’s where you got yer stones, man!

Will and I tested the trebuchet today at the fair grounds. 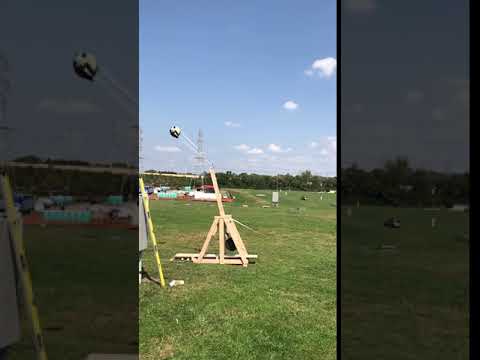 Thanks Will for getting this together.

It was working very well. We were getting consistently 75-80 feet with the basketball. We even managed to chuck a small pumpkin that weighed about the same as a basketball. It smashed on the second try. (sorry no videos).

The woman from the museum center met us, she was very nice. We will basically get the whole lawn space at the entrance, no food trucks. We will ask them to fence off near the trebuchet and outward for the landing area. I was thinking we could bring the PA so we could do some talking to the crowd. There is power by our launch area.

We had some interesting ideas to create an Angry Birds style of cardboard boxes to smash with the basketball.
Another idea was to have a kiddie pool setup and there would be a good splash if it hits.
Perhaps pie plates with shaving cream for a big “splat”. Maybe kids could place the targets and then launch the basketball.

We also need to paint the beast. It looks kind of boring.

Please don’t forget that we can use some help for the Maker Faire. Even just an hour or two would be very helpful.

Let’s do some brainstorming at the meeting this Tuesday.

Fun stuff, trebuchet is looking good!
I haven’t made it to the recent meetings but…would Will and co-conspirators still like a donation of my old trebuchet? Scale is similar, slightly larger, optimized for throwing water balloons.

Could be exciting! Might be nice to have a backup. When Will first ran the Trebuchet the part holding the weight broke off.

Will repaired it and has built a second arm for a spare.
Will can’t make the Faire, he is committed to another event.
We might need to get someone with a pickup truck to deliver the tossers to the faire grounds.
I think they will be doing some setup on Friday, maybe we can deliver them then.

I was thinking about the Maker Faire in two weeks.
I might be cool to create a wall of cardboard boxes and smash them with the basketball.
So could people bring some boxes to the Hive (broken down) and we can assemble them with packing tape and maybe paint them stone color. I have a few Amazon boxes I’ll bring.