I got an email last night that the lathe got shipped out! UPS Freight has the estimated delivery as this coming Tuesday “By end of day”.

Not a big deal as Garden Street agreed to lend us a forklift to get it off of the truck and on to the loading dock.

If anyone wanted to be there while it comes off of the truck send me a separate email with your phone number and I can text/call when I get the actual arrival time on Tuesday. Unfortunately since it is a little early it might sit on the loading dock for a few days. Forecast looks like mild rain so some light tarps should protect it fine.

I’ll send out an email with some plans for how to move it in to the space so we know what needs to still be bought/made/figured out.

Perfect timing since my dad just picked up his lathe!

Perfect timing indeed. Did he get everything that came with it? I tried to make sure I set all of the stuff on the lathe that he originally brought down. Just want to make sure none of it was missing.

I think so. There were two things he didn’t think we’re his so we left them in place of where the lathe had been. Im sure if we find stuff that is his he’ll be fine with me bringing it to them later

I am flying back form the Maker Faire Monday and I was planning on taking Tuesday off to recover. I should be able to help.

I’m down at the hive now. The truck has not yet arrived. John says the lathe arrived at the Cincinnati shipment center this morning at 6:40 AM. He expects another text shortly before the lathe arrives at the hive. Our stated delivery window is between 10 AM and 2 PM.

The lathe has arrived, and with a tip of the top hat to Garden street for providing a forklift and general moving proficiency, it has been loaded into the Hive.

The lathe is presently in the back of the hive by the tool shelves. Please resist the temptation to fiddle with it until we’ve moved it into the metals room and properly calibrated the machine. Expect this to take a few weeks. This machine is new to all of us, and we have some serious research and setup time ahead. 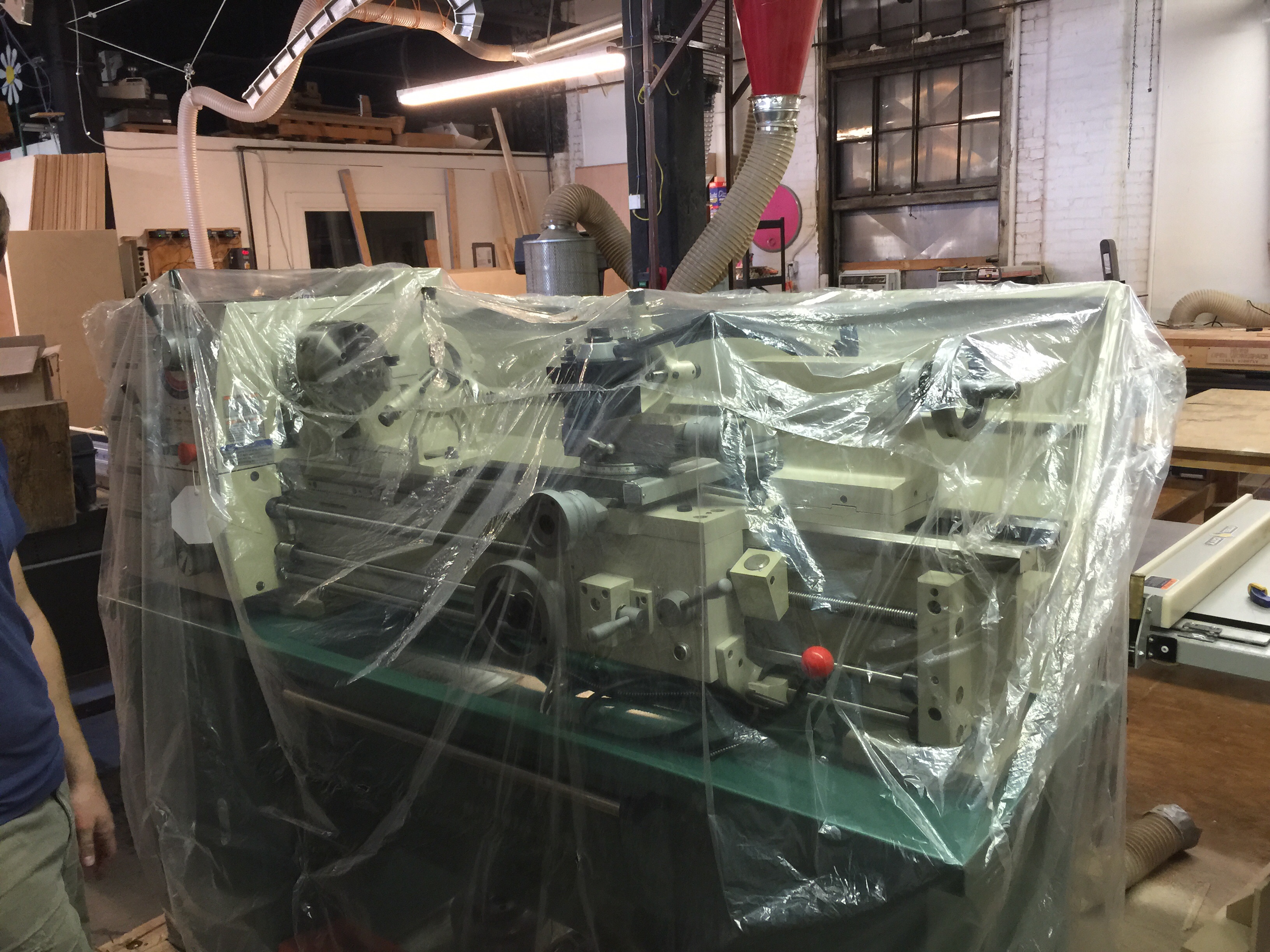 And it hasn’t fallen through the floor, yet.

Ok, so now that it is in the space here is my plan:

I bought the 1" bars needed to lift the lathe up, but we still need nylon straps and TWO 2k+ pound engine hoists to lift it up.

Greg has offered to bring one engine hoist down, does anyone else have one they would be willing to bring? I think Dave Lear mentioned this, so I’ll ask him.

As for nylon straps, for the configuration we will be hoisting (bridle hitch with an eye-and-eye sling likely) we’d be more than safe having a 3k lb vertical hitch capacity rated nylon sling (see table 18 https://www.osha.gov/dsg/guidance/slings/tables-figures.html). Grainger has some for about $35 which isn’t too bad, but if anyone has some to lend that would be good. What do people think, should we get some just to have around?

Other than the hoists and slings the only other thing needed are leveling feet which I will try to order today so they can get here on Monday or Tuesday.