The Amana surfacing bit (and replacement blades) is in the drawer of the CNC computer cart. 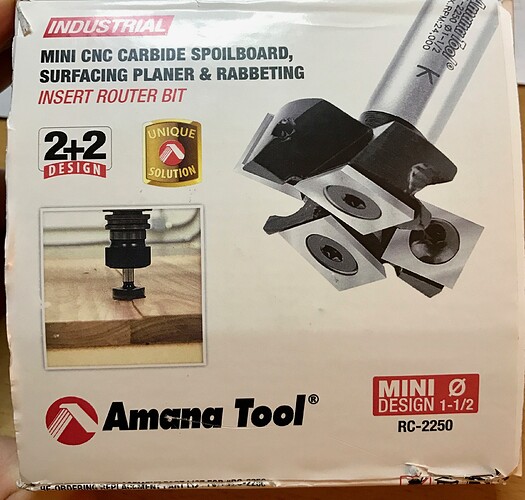 I prefer the latter suggestion.

Let’s break it in a fit of rage…

Maybe we can mount it in a hanheld router and try it out on the new table Andrew built?

Actually I was kidding. There’s a big “CNC only” sticker on the box.
If you want to take the table apart and put it on the CNC, we could do a surfacing pass.

It looks good for beards.
-D

And I was “playing” dumb. (Yes, I know it’s stretch

So I wonder what would happen in a normal router? How deep do the blades cut? If it’s enough for a little whiggle room, I don’t see the issue, you certainly can buy cutters that size that aren’t labeled as CNC only.

Also I think at this point we’d need a sawzall, a wrecking bar, and some dynamite to get the workbench apart…

I think the ante needs to be upped. Chest hair. I dare someone to shave their chest with it.

I am pretty sure it spins too fast to be ran safely..

Sounds kinda counter intuitive but this type of activity is usually for putting hairs on your chest... and yet removing them at the same time.

It's rated at 24,000 rpm, which is below the speed of our Porter Cable router. Also not seeing any CNC only on box, at least in the pic Brad posted.

Eh it's for the CNC. REAL wood workers use chisels and hand planes. I'll shave your chest hair with those Dave!

Andrew is right.
I was thinking of the monster bit we were looking at.
This bit has the hand held router icon so it can be used handheld.

On the website it says the bit is OK for handheld routers but the box for the bit shows the handheld router with the “no” symbol. (If you look at the second pic with the spare blade info the icons are on the right)

So just be super careful?

Check to verify, I can't yet tell, with the replaceable inserts this bit may have something of a solid center causing to to not be 'center cutting'. You may not be able to plunge it into the stock with a vertical move. You may have to lower it off-part below surface level and approach with a side-cutting horizontal move.

Good catch. From the end view pic it doesn’t appear to have center cutting capability. 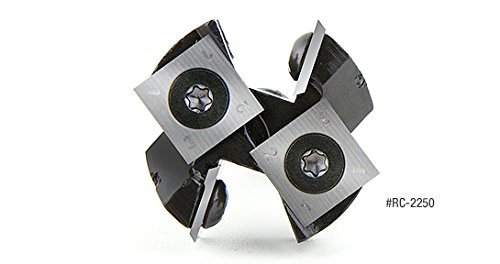 I would approach from the side.