Sewing station set up in the lounge.

I set up a sewing station in the lounge since the space in the fab lab has been overrun with 3D printer stuff. The newer of the two sewing machines is set up and ready to be threaded. The manual is behind the sewing machine.

Please keep the table clean and the machine switched off and covered when you’re not using it. (And don’t pile stuff on it when it’s not being used.) If the space is needed for something else, let me know and I will find another place for it. Thanks! 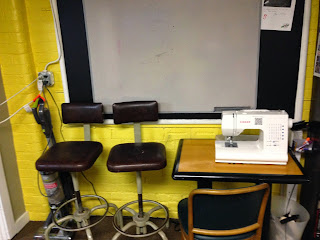 That is awesome! Do we have an area (or looking to expand) that we could transform into am area for sewing and clothing/cloth based projects? I know that a few of us are working on projects like costumes (my Klingon and the nice 7ft space marine) And a dedicated spot like how the wood working area and the fablab setup is would be awesome.

As someone who sews frequently down at the hive, this is a great idea!

However, the lounge is sort of a place where there shouldn’t be any designated “work” spaces… so that it stays a lounge.

We have been talking for a long while about making a designated “creative space” and have been thinking of using the back wall (where the vending machine and the sound system is) behind the common area. We need some improved lighting there, which was discussed some months ago.

That area would provide a long continuous working surface which would be more beneficial for sewing on larger projects, as well as cutting fabric, and in general having the table space to work on creative projects!

I love this step, and it is a great idea for now, however I think in the future a larger designated space outside of the lounge will be better in the long run.

Let’s get the ball rolling, and see if we can get some improved lighting in the back soon!! I really think that would be the perfect space.

I agree that the lounge shouldn’t be a work area if we can avoid it. I just don’t see a way to avoid it for right now which is why I did my best to tuck it in a corner where there isn’t enough room to leave stuff laying out.

I’ll go ahead and take on the project of giving the sewing machine a more permanent home since there is enough interest.

Yes it is wonderful! Thank you.

I’d love to help get the permanent creative space set up, too. I will also start working on that.

We should meet up at the hive to discuss this in more detail before both of us start working on the same project independently. The sewing machine would be a part of any arts and crafts area.

I fully support a sewing/crafts area (although I probably won’t be using it much myself).

As you are making remodeling plans, please consider that it will be good to maintain an accessible place for the digital projector and the “google box” computer we use for video conference.

Daniel, your giant space marine boots are kind of awesome.

I would definitely take that into consideration when making any plans. That projector is probably used more than the sewing machine.

To clarify: forever ago when this discussion started (a year or two ago) the plan was just to put tables across that whole back wall, and set up the artsy stuff, like the paper cutters, other supplies, sewing machine, etc, on that “station”. Then the plan was to move up the whole common area by a foot or two, to keep it the same size, and to move the projector up just a bit to allow room for a table across the back. So everything would be there in the same orientation, just a few feet shifted forward. Access to everything, and all the other tables would still be there exactly as is, we would just be able to utilize the back wall as productive space.

That was just what we were talking about for a long time in the past, but it obviously can change.

They are not my boots but they are awesome eh? I wish I could take credit.

I want to help set this up, let me know when and if you are gonna meet to do this.