March 27th will be the Saturday Night Blows event. More details on
times, etc will be coming. The glass blowers will be recreating
Galileos Finger. They are doing the finger and glass holding and we
will be making the pedestal for the event.

We don't have a long time to build this pedistal so we need to start
brainstorming and working on how we will do this as well as what
parts, etc. we need to get.

Any ideas on how/what we should build? Yes, we will have LEDs but we
need details on actual construction ideas.

I wonder if Jim's lathe is available to turn something from wood; that's how we made lamp bases in 8th grade shop classes - oh so many years ago.

The lathe I brought to the HIVE is a bit small.

I do have a bigger (junk) lathe that is the right size and can turn wood. I don’t have a good feel for the design and/or size we’d be thinking about. Anybody volunteer a design concept or have any appropriate stock?

I did some poking around online and found some better pictures, they are attached. I also found a site describing the relic.

The pedestal has the following text etched on it:

Translated:
(This is the finger with which the illustrious hand covered the heavens and indicated their immense space.
It pointed to new stars with the marvellous instrument, made of glass, and revealed them to the senses. And thus it was able to reach what Titania could never attain).

Warren mentioned possibly making it larger than it currently is, which is something we should probably figure out before we commit to anything. I think it might be interesting to somehow work the poem back onto the pedestal. 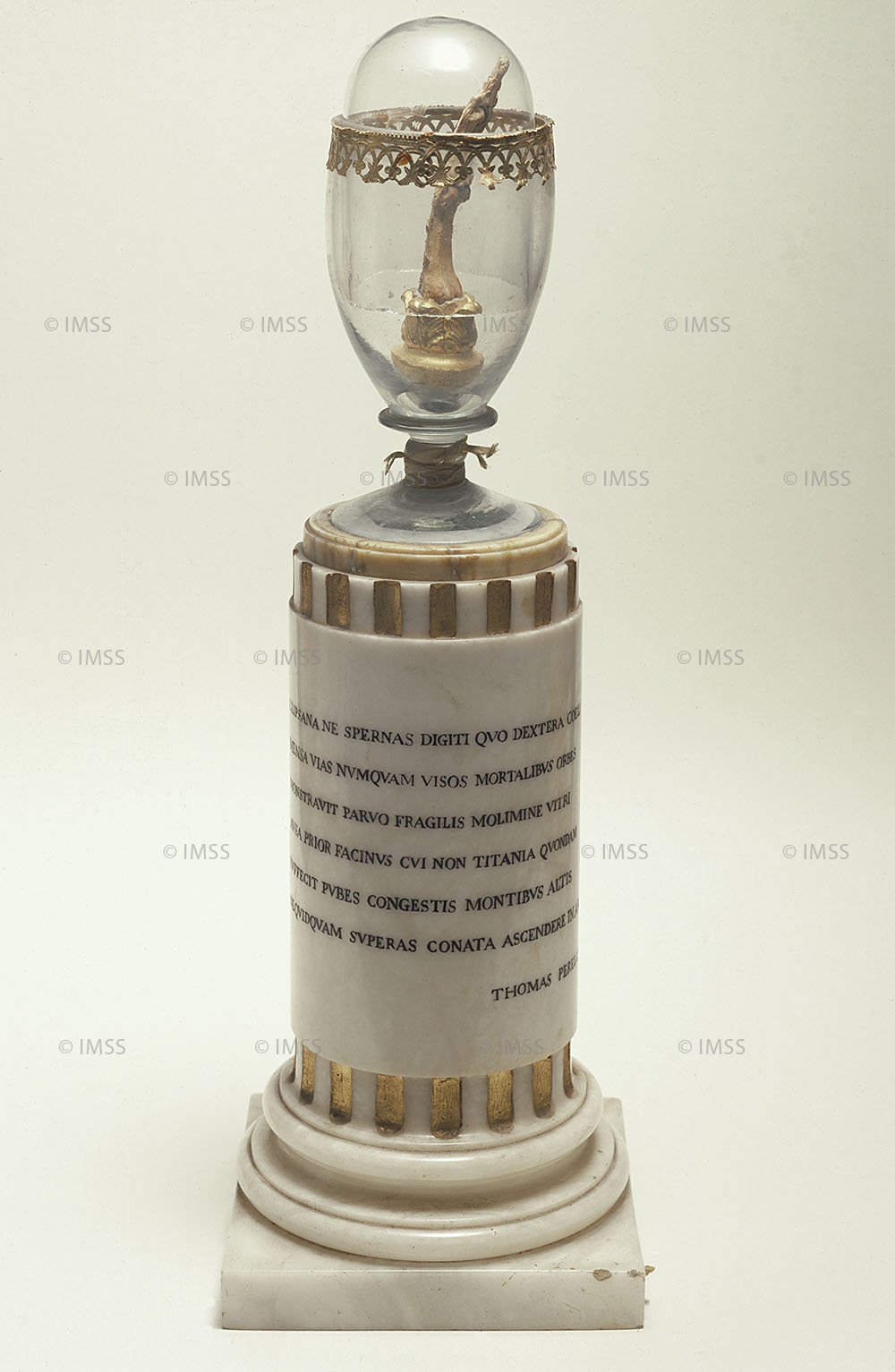 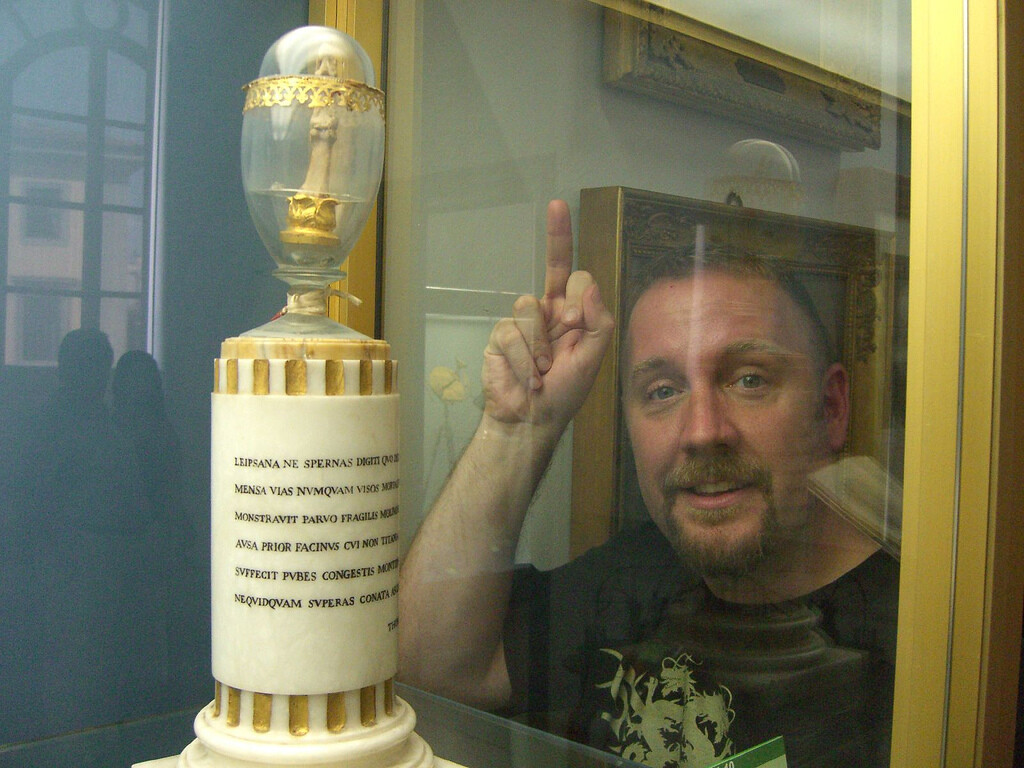 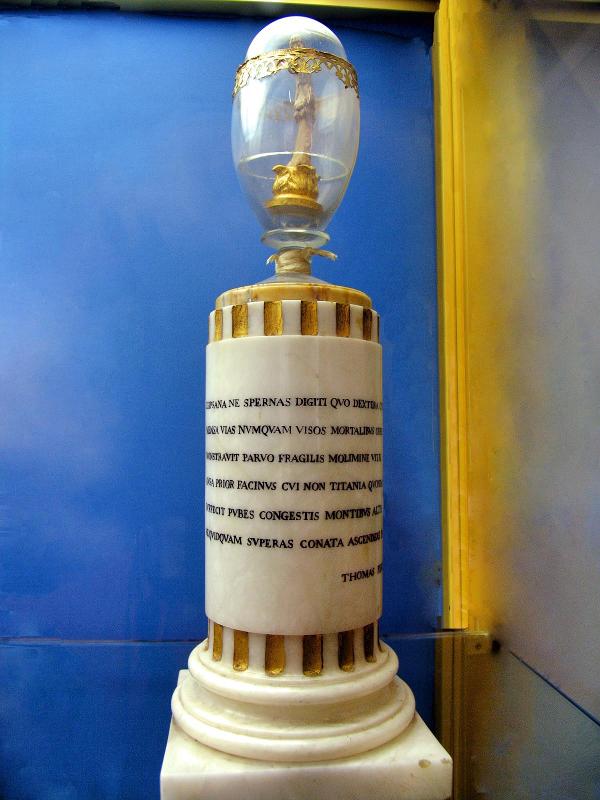 I have no idea how to make a pedestal nor will I be in town that
weekend but I would like to help build something up so we can ensure
we have something and help out if we need something to show off. I
could draw the finger in blender or something?? I can also come by
this weekend to help out but we will probably need one of our
mechanical engineers to come up with some design or concept that we
can complete in short order.

I would like to also make a space for a small plaque where we can put
a short message about where *our* piece came from so when it's in the
space ppl can read what it is and why it's at the hive, etc. Maybe
even have our guest speaker from tuesday use his laser etcher to make
the plaque?

Another option might be to just modify an existing lamp base with an LED, if i'm right in guessing that the finger is just a bit bigger than a light bulb; we could probably find a cheap but attractive lamp at Goodwill and pull the ac cord from the socket and replace it with led wiring - then mount the finger where the bulb would have been.

But I don't know how to do that.

I unfortunately (well, kinda) have tickets to Beerfest on the 27th
from 5-9pm, so I'm going to be far too drunk to be useful for the
remainder of that evening. This sure looks neat, though. I like
Thurmond's idea of using an existing lamp base and modifying it.

FYI - James and I visited Clyde Kober (the fellow with the Epilog
laser) in his shop this past Saturday. He's got a nice setup and we
did some test engraving on a piece of Corian material. We sort-of
made a preliminary plan that I'd donate a piece of Corian (what size?)
James would CorelDraw the Galilio Finger text (in Latin and/or
English(?) and Clyde would laser etch it as a plaque to go on whatever
base we end up with.

I will be out-of-town and miss the Friday night blow, so I don't know
if we will have a plaque or a base in time. We can talk this Tuesday
night.

The latest on the event this Saturday is that it will start at 6:30pm.
It's at River City Works which is located at 532 E. 12th St. We
should plan on having anything we're setting up all set by 6:00. The
studio will be open as early as 11:00am if we want to stop by earlier.

I am planning on being there and running the MakerBot. I currently
have an appointment that is from 6:00-6:30 that I'm trying to
reschedule.

I know a lot of people said they have other plans, so I was hoping I
could get a show of hands of A) who is planning on attending and B)
who is willing to help out with building the stand for the glass piece
to sit on when it's done.

I'm not available to work on stuff tonight, but I can be at the space
Thursday, Friday, and/or Saturday to work on it. Anyone else?

What's the latest update on getting the laser-engraving - can Clyde
get it done by this weekend?

What materials should we look at for the body of the stand? Maybe
build it out of scrap electronics?

I am planning on going on saturday. I can assist in making some sort of pedestal. From what I gathered laser engraving will not be possible by Saturday.

I have plans for tonight and thursday, however I will be available friday & saturday.

I worked a bit on some ideas for the pedestal tonight, but I didn't
get very far...

I had the idea of using one of the LCD monitor stands as a base and
building something on top of that. I also found that I can get a cool
effect by shining one of the RGB LEDs through the plexiglass sticks
that came off of some window blinds. So I was thinking of cutting
those up and making some vertical "beams" with light shining through.
I've got a program that cycles through the colors running on my
Arduino.

I'm using a milk jug full of water to approximate the glass
sculpture's dimensions. I'm not sure how we're going to have to
support the final piece though. I don't know if the bottom of it will
have a stem, be flat, or be round like a ball.

I'm going to come back here in the morning sometime. Maybe we can
call Warren and find out more details about mounting the piece. If
anyone is planning on being around here during the day tomorrow
(Saturday) let me know.

If all else fails, we can build some sort of pedestal after we receive
the piece...

It is 1:10 pm Saturday and I am getting ready to venture on down to the hackerspace, I should be there around 2:00 pm.

Hey all just wanted to post a link to the photos I took. I've not had
time to edit most of them, only go through and toss the really bad
shots.

I also put my (much smaller) set of photos from the event here:
http://hodapple.com/blag/?p=268