I was thinking about proposing a “tougher” sandblasting cabinet for our place.
I looked into the Harbor Freight version, it runs about $180.
https://www.harborfreight.com/abrasive-blast-cabinet-68893.html

(Of course you can spend thousands)

As a rule it seems that Harbor Freight stuff tends to fall apart after a few uses. I’m not sure how much use the sandblasting cabinet gets but it’s something to keep in mind.

Yep, we had one of those at hive, in fact. It fell apart even though it was seldom used. I tried it. It was even worse than most harbor freight fails.

As a rule it seems that Harbor Freight stuff tends to fall apart after a few uses. I’m not sure how much use the sandblasting cabinet gets but it’s something to keep in mind.

If it was the same one that we had prior to the electronics one he have right now, what I mainly remember about that cabinet was that most all of the fittings had be damaged in some way, and in ways I could not figure out how it had been done. And because of that the seals, did not. If the harbor freight one predated that, then I do not know anything about it and can’t speak to it.

I’m all for having a new blasting cabinet that has a larger blasting radius that the current model. It would be even nicer if it had a larger usable blasting chamber with a smaller footprint than our current one which I believe both of these options have.

The reviews of the amazon one aren’t great, and I would go so far as to question if the amazon linked one is simply a rebadged CP one. If nothing else, I’m betting the two of them both roll out of the same assembly line in the same factory.

I’d suggest the CP one and spend the extra cash on some silicone so we can run an extra bead on the seams.

Options as I see them are:

None of these is a solution ready off the shelf. They would each take some work.

Note, We have a welder and a vote in for a variety of metal working tools. The shop across the street can plasma cut and form large sheets.
We have the technology. Do we have the interest?

Why would the gun need to be replaced in the new cabinet? And wouldn’t a very simple dust collector be effective for this cabinet? Something as simple as the bucket and hose system that was last seen laying under the radial arm?
I’ve also never used a cabinet with an LED light source, does it make much of a difference over a standard heatcandescent bulb?

It seems to me that $180 plus a tube of silicone Caulk, and attaching simple collector we have and we have almost gotten all 3 Cheap, Fast & Easy.

I have never priced a replacement gun, so I don’t know if that is another $200 expense or a $30 expense for a fancy one. Either way, we could always pick that up later if this one didn’t perform well enough.

No one LIKES cheap tools; but if I asked you to remove a 12mm bolt, would you rather use a crappy wrench or your bare hands?

Is this worth looking at?

So if is in good condition, might be a good idea.

I sort of assumed that the ‘electronics’ blaster would be hacked a bit. As is, it could be useful for modeling, arts, crafts, etc.

I seriously doubt much need for electronics micro-blasting. ‎In an electronics shop, this machine would only do 2 things - remove solder mask from PCBS, and remove corrosion from battery terminals and corroded leads. Solvents and hand tools can be used for both those applications as well. So, why not mod it? We already have it, it’s well made, and it’s not very useful in its current state.

So if is in good condition, might be a good idea.

I don’t have the bandwidth to build a blast cabinet.

We could certainly get a bigger gun and use it in the existing cabinet,which is a bit small, but could be a good test.

I don’t really want a HF cabinet. The Craigslist one looks super cool. Perhaps we could keep our eyes out for a less expensive nice one. Or maybe use our non-profit status to get a donation?

We already have the existing cabinet, why not get a decent gun. If folks use it, great. If we need to get a bigger one, okay, but do we need it now? If we moved up to a bigger cabinet, the gun would still be usable, right? Bird in the hand, blah blah.

I see the benefit, but I’m not certain of the level of our need…

Finally, I’m feeling like we’re not “seeing the shop for the tools”. How we equip a shop depends on what needs to be done there, what capability is needed to accomplish a given goal. Do we need a sandblaster or do we need a more complete metal shop setup to accomplish X Y or Z? If we need that metal shop, do we want to have classes? Do we include consumables? Do we want to make big things or just small things? etc…

I think a gun to handle heavier media is the best option. That way we can keep the fine media setup if needed. I’ll do some digging. 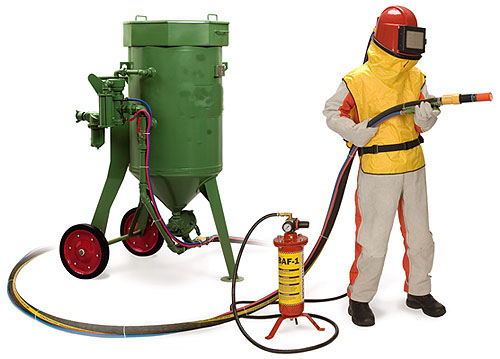 You jest, but I worked with a guy that did that as a side job.
He had the full getup and a tow behind diesel big boy screw air compressor. (That was as big as a car)
He would sand blast construction equipment and buildings. I always wanted to put all the gear on an remove the paint from someone’s car.

I vote yes on the lorins proposal for the green thing. 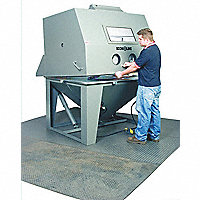 Our current blast cabinet actually has a very good dust filter system including a pneumatic dust shaker to knock the fines off the filter.
The media capture funnel is large. There is a good double bulb florescent light.
There is a good capacity pressure regulator, filter, air dryer on the air line.
It is a very good piece of equipment. It just isn’t as big as some might like and the blaster can’t cut it.

Two easy improvements are under warden budget. We ought to just buy them.

The third improvement is to chop the cabinet front panel loose and add space to the cabinet.
Use the die grinder we have to cut the cabinet front panel loose leaving a flange along the sides.
Add 18 Ga sheet metal panels to raise the front panel up and out. New side panels would be made.
The front access door would be reworked to 18"H 29"W (ya still cant blast engine blocks in it.)
The sheet metal can be either cut and formed in the hive or jobbed out across the street.
We have approved purchase of air shears and nibbler capable of cutting 18 Ga.

We wouldn’t cut the cabinet up until the additional sheet metal is in house and ready.

Assembly of the expanded cabinet with sheet metal screws and welding can be a group project.
Finish it off with a nice coat of paint.

Keep the micro grit air brush for whatever you might want. Has anyone tried to etch glass with the current gun?

Estimate the budget for the whole project at under $100.
Anybody interested in making something?

Is it time for me to bring my sheet metal equipment to the “floor”. I think this is one of MANY cases where very basic sheet metal equipment would be of great value and utility. I never worked with a real shop quality shear, box pan brake, slip roll until I was in graduate school. I never knew what I was missing, and suddenly so many metal projects became easy…

Sheet metal tools have my vote, someone just needs to pick some out.