Does anyone have experience or knowledge of opening old safes without the combination? My grandfather has a safe and the combination has been lost. We don’t know what is in it. I’ve been watching a few videos I found on youtube. Some say forget about using a stethoscope and others say it works if you know how. My family got an ‘estimate’ from a ‘locksmith’ for $50 plus $45/hour to drill/cut it open. Of course that would destroy the safe itself which is worth a few hundred at least.

The safe is a Meilink Model 2.

I found this lecture about safe cracking that was interesting.

How big is the safe? Is it something you could leave at the space for a bit for us to take a non-destructive crack at?

I used to hang out with a locksmith years ago and I remember one day walking into the shop and he had a huge nice metal safe (taller than me) He had a small robotic arm attached to the dial and lever. It was literally just churning through every combination while he did other things… I’ve always wanted to build one of those …

Could we get a pic of it? It appears that the newer modles are a bit easier to work with.

I asked them to send me a photo.

Since we don’t know what’s in it I don’t think they would let me leave it at the space. Maybe I could bring it by for a few hours some evening or some folks could come to my house. This makes me want to buy an old safe now.

I would have assumed that the older safes would be easier to open than a new one. I guess it depends on the quality of the safe also.

Any thoughts on the palm sander method? I understand it doesn’t work for all safes, and you’d have to build a rig for it… Has it been tried? Do we have intelligence saying that wouldn’t work?

I’ve always wanted to see that work but never tried.

My thought is that the safe might be old enough that it would work. Never done it either.

How does the the palm sander method work? I assume you put the palm sander against the dial and it jiggles the wheels until the slots are at the top. Then turn the dial ccw to the contact region and see if it engages?

I finally got the safe last weekend and I’ve spent hours the last few evenings and today working through mapping the wheels as described in ‘safecracking for software engineers’. I have managed to identify high points on all three wheels but no good low points. I’ve gone back and remapped individual wheels with the lowest points found on the other two.

The safe is pretty rough looking with rust all over so I was starting to think that some of the wheels are dragging other wheels around and causing inconsistent readings. I found another article at ‘how stuff works’ that tells how to count the wheels. Although I already know this one has 3 wheels I thought if I can feel the three wheels click at the expected place during the procedure then it would seem that they aren’t dragging. The contact region on the safe is at 98-08. So I parked the wheels at 48 then turned the dial back to start picking up wheels in the opposite direction. They should all click when passing 48 where they were parked. In one direction the wheels click hard all three times. In the other direction it sort of clicks but more subtle with a lurch.

The safe is old and rusty so isn’t worth all that much so I’m not going to hire a locksmith. I’m getting close to getting out the angle grinder and cutting out the bottom. Once I find out it is empty, (I’m almost sure it is) then I could leave it at Hive13 for everyone to to have a chance at manipulation. I’ve learned a lot about safes from this experience. 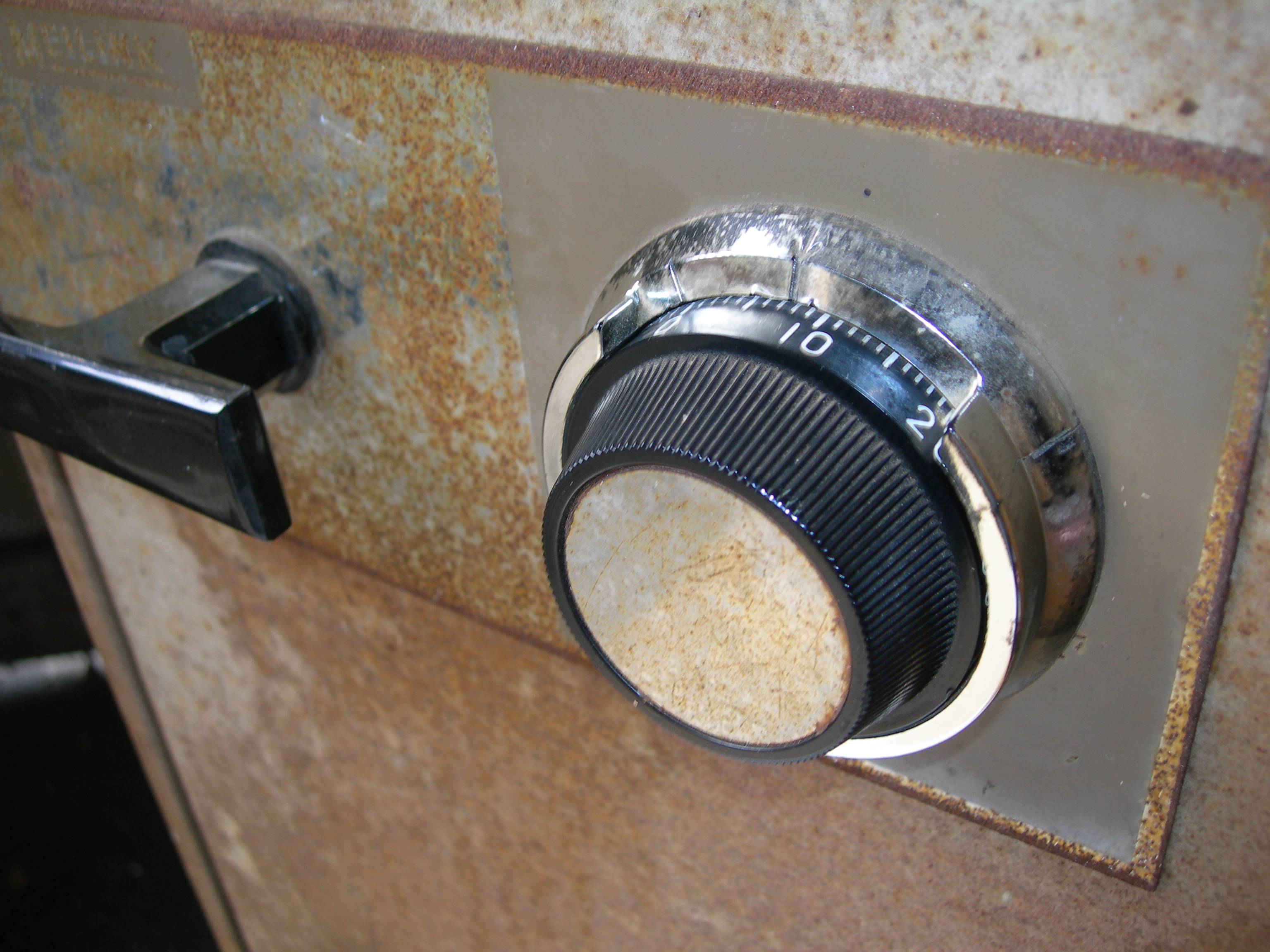 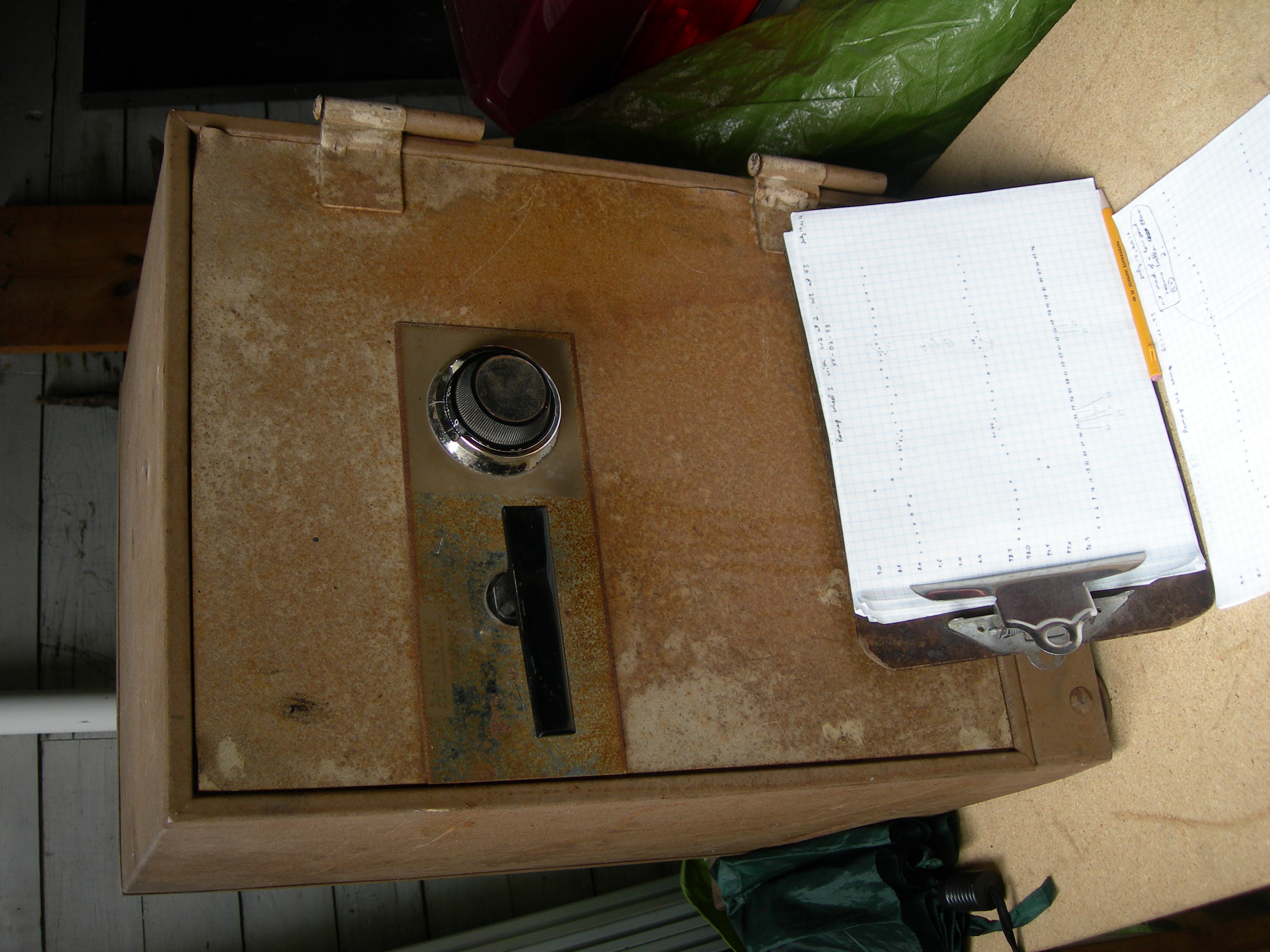