After having talked with Jim (Shealy) two weeks ago about the CNC area, I
have decided to clean all the unused items in the area.
So, on the shelves close to the Shapoko (see attached files), there is a
old 3D scanner. This a Roland Picza pix-3:

It obviously not belongs to the CNC area. I wonder if someone will be
interested to use it in the fablab or maybe take it home. Jim told me that
we can have a better resolution with a Microsoft Kinect, so I am not sure
it worth to keep it in the hive.

If one have an idea of what to do with this machine, feel free to comment…. 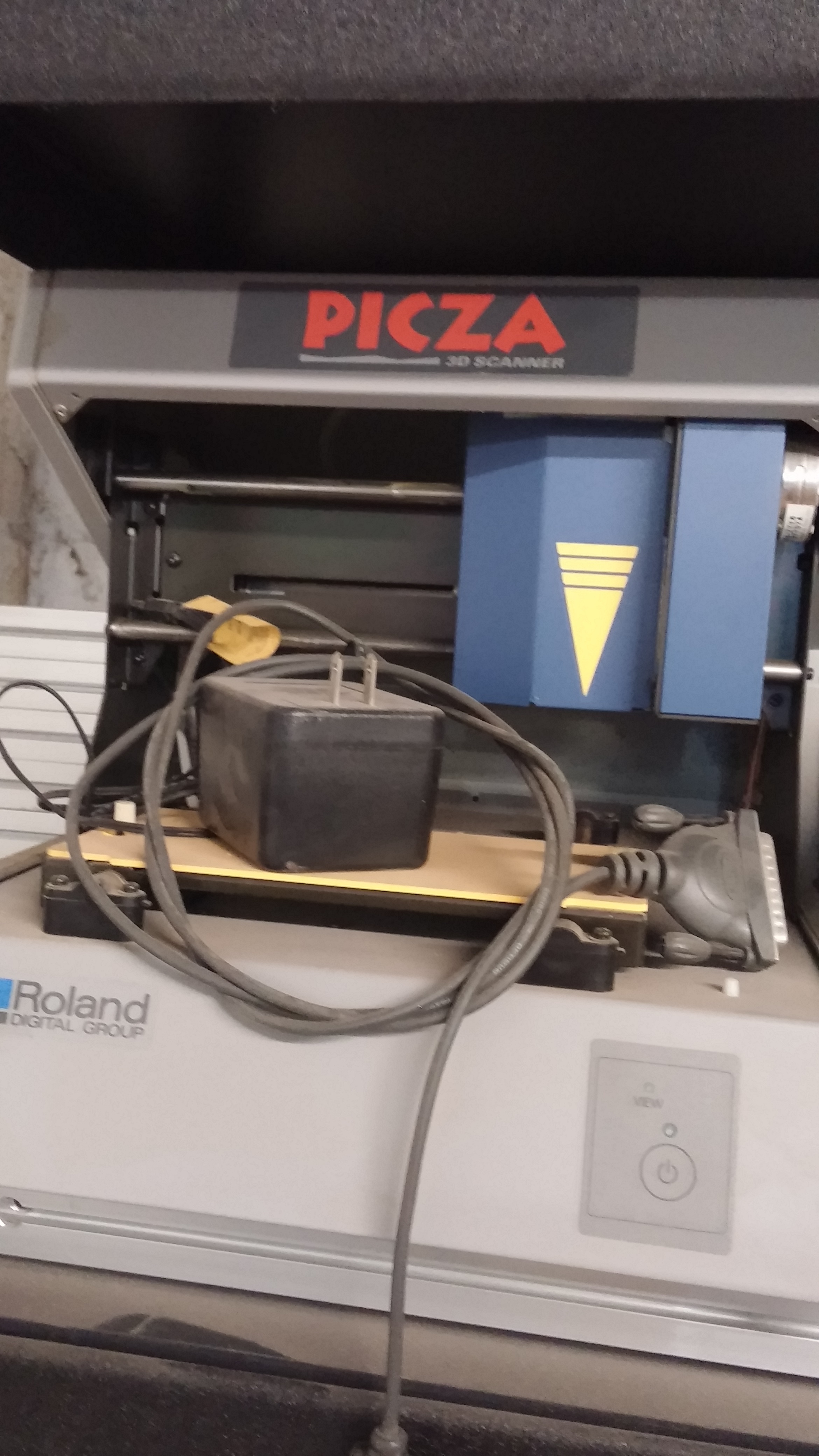 The picza was donated with the roland mill, so it is entirely the Hive’s (I think)

I wouldnt mind trying to figure out how to use it, could it be modified to put out a better resolution (add a new camera etc)?

this scanner is not using a camera or an optical sensor. it is a probe that touching the object to scan. The probe is linked to a piezo sensor that vibrate and the scanner is measuring the damping of the vibration.

It will be difficult to change this system. Most of the recent scanner are using optical scanning. I can download and install the roland software the fablab computer. But it has to be useful for someone, the scanner is here since (at least) June last year and nobody has claim for it…

My understanding is that you (Daniel), want to take care of this machine, right?

Anything can be modified with enough time, patience and desire. Is it worth it? Who knows.
-D

that is my point! there is software now that are using the kinect, the asus Xtion or other to do it better and faster….

Definitely not worth it to modify it and it is the hive’s to sell. I believe I tried (or maybe it was Paul) to scan an arduino on that. Even at one of the high resolution modes it looked like crap and it took something like 18 hours to scan.

We may be able to put it on craigslist and sell it to someone who may want it for something.

. I also think we have to set a given time for selling it.
If the scanner isn’t gone in one month it goes on the purgatory shelf.

Put it on the Purgatory shelf now. With our new Visual purgatory system, it will be pictured the second Monday in March and become available for disposal the second Monday in April. In the meantime, it can go on Craigslist. Tape a note to the scanner that says “I am on craigslist” until its time is up. If it is going to sell, that should be plenty of time for it to do so.

As a side note, I worked extensively with doing 3D scans on Kinect & Asus Xtion around 2 years ago. Asus Xtion & Kinect definitely do it faster; ‘better’ is a bit vague. They’ll scan something much larger, but they won’t really cover details as small as the Roland will - at least, not without some new optics.

However, if people are interested, I can do some sort of “How To Do Mostly-Acceptable 3D Scans Using Cheap Video Game Hardware and a Ton of GPU Power” demonstration.

It will be very nice of you. Do you have try the primesense scanner?
If the Roland could get small details that no other affordable current scanner could get, why we don’t keep it and install the software on the fablab PC?

They’re all PrimeSense sensors inside; I used a PrimeSense reference model too at the last job, and it was literally the same as an Asus Xtion but with slightly different calibration. Apple bought out PrimeSense though, so I’m not sure what the future is - but the guys at http://structure.io/ took over the drivers it used (OpenNI) and their own hardware looks about the same.

But, in spite of that Roland capturing smaller details, I don’t know that anyone has really had cause to use it.

The roland scanner is a probe based scanner so its ability to get fine details is questionable. It is more of 2.5d scanner than a 3d scanner.

I would love to hear a talk on that hodapp. The scans you showed us in IRC always looked so cool.

The scanner is on the purgatory since Tuesday, anyone interested in saving it form there is welcome otherwise…

If no one takes it I can handle putting it on craigslist after the next board meeting. (that is the timing we decided on)

Now on the note of possible getting a nicer, newer 3d scanner.

When the welding table was dropped off earlier today Rob, the guy who owns the machining shop across the street, was very curious to see if we had a good 3d scanner along with our 3d printers. He said he has had quite a few people come in and ask him if he can get items 3d scanned for reproduction. If we have one he wanted to send people our way to get stuff scanned. This would be a great opportunity to get more people who are doing interesting things in to the space.

I haven’t looked at 3d scanner tech much, but this has made me more curious. Does anyone on the list have up to date knowledge of 3d scanners?

I am going to try playing with the Roland 3D Scanner. I am taking it to my shop at home to see what the serial data, etc looks like on my machine there with the correct serial ports, etc.

My work is centered around obsolete technology, and I have been interested in doing some tactile terrain mapping pieces – this may prove more useful than building a probe sensor from scratch. (well, at least faster). It has been in purgatory since 2/14.

Please let me know if I should bring it back for a sale, or other use. I am not planning any destructive testing - it will be in one piece.

It sounds like you have a good use for it. Fine by me if you take it for good.