We’ve got what appears to be several maple project boards, and a nice hunk of walnut or some other 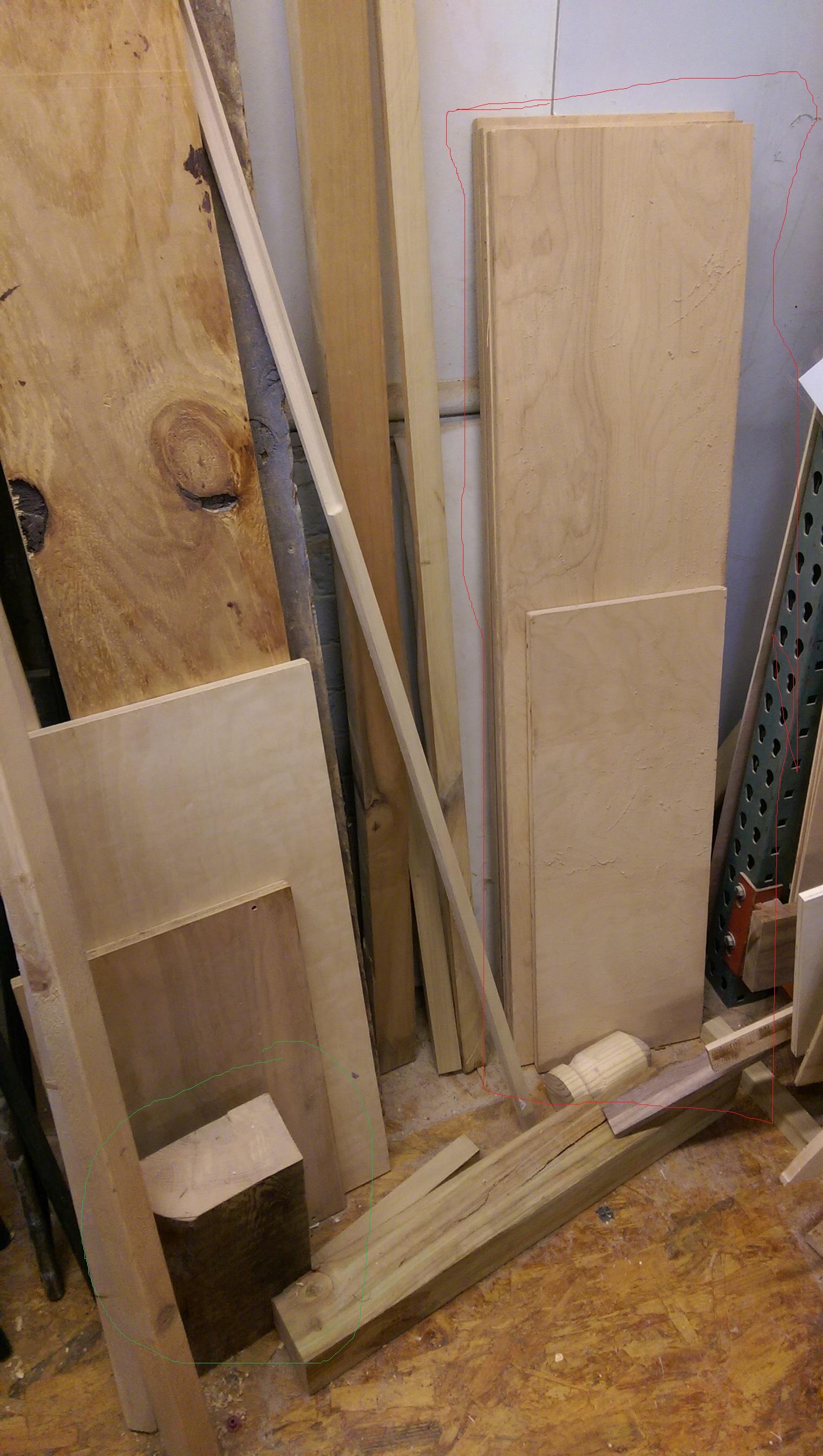 How soon can we lay claim to any of that? I will call dibs to home all of that if it is all orphaned.

January 1st from what I can see in the post.

To be clear, I’m attempting to give people every bit of the time I said I would, and further it will literally be going into the wood scrap heap. It will not be going into my personal storage, or hive storage or anything else. I don’t feel comfortable with using my position as the wood shop warden to just claim stuff, even if it is in the wrong place, and appears to be abandoned. Since you’re interested I’ll post something on the newgroup when it hits the scrap heap, just so you and anybody else everybody gets a chance.

As for the exact time, it will be on or after the 1st, since that’s what I told people. I’m probably going to be busy on the 1st, so the 2nd is looking more likely.

All the stuff in the corner is now on the scrap heap. In the future lumber left in the woodshop unlabeled will be moved into the scrap heap. I’ll make an attempt to notify people, using a similar procedure to purgatory, but I’d like to see any end to random piles of stuff appearing forever. If you’ve got a project, label it.

So yea, just like purgatory you need to give notice before pitching things. 30 day notice just like with the purgatory shelves. Don’t throw away someone’s property because you don’t want to wait. That’s just an asshole move. I’d like to see the end of ultimatums, but hey that hasn’t stopped either.

Not an ultimatum, just a statement of fact.

I’ve seen various cut offs, scrap, and other random stuff appearing in the woodshop because we have some people who can’t be bothered to clean up after themselves. For example we had a large pile of OSB right in the middle of the floor a few days ago making it impossible to walk without tripping. In the case of the mystery pile in this thread it was making the temporary wood storage unusable for the slots up against the wall. We just don’t have the room in the woodshop to allow people to leave stuff in random places, and expect other people to work around it. We have boxes and temporary wood storage to address these problems. If you’re working on a project then you can leave a note. Even if you don’t leave a note, and it’s pretty obvious it’s a project I’m going to leave it.

Finally, just like this thread, the one before it, and the numerous private emails I’ve sent and conversations I’ve had, I’ll make every attempt to determine who actually owns something before putting it in the scrap heap. But I’m not going to make that level of effort for every tiny chunk of pine, or bit of plywood. I’m not going to take 6 weeks, numerous pics, two mail threads, and all those private emails. It’s a huge waste of my time to accommodate other people who are carelessly leaving things out. I’d like to move away from the drunken monkey party approach to using the space. So I’m going to use my judgement on what’s a piece of forgotten waste, and what’s not. If not I’ll post a pic and give people some time. I believe most people would prefer to work in a space that’s not overrun with random scrap piles and other detritus. If people don’t want their stuff going into the scrap heap there are a number of ways to avoid it.

If that’s not acceptable, I think you’re demanding an unreasonable amount of my time. In that case, maybe it would be better if you took over that part of things, you seem very passionate about it, and I’d appreciate the help. Next time you’re down at the Hive we can discuss the particulars.

Speakinf of stuff going into purgatory Daniel. You still haven’t cleaned out your metal locker. Notice was given months ago.

Come the second Saturday of this month you better believe anything left in the metal lockers is going to purgatory. The lockers are making their way out of the hive then.

Ok Andrew let me reword this: throwing away someone’s personal property without proper notice is illegal. A 30 day notice is required in most states, I am not lawyer and just going off of things I had to investigate in the past. I mean feel free to take the risk without looking up the laws yourself. The hive has shown a history of given 30 day notice with the purgatory shelves, by not given that notice you are not just making yourself liable but as an acting representative (warden) you are also making the hive liable. But hey that’s on you.

Tiffany: I’ll double check any metal locker but I do believe I moved everything out of the metal locker when I got my box.

I don’t think asking people to label their stuff is unreasonable. I don’t think throwing away unlabeled scrap wood would cause any kind of liability. Also, Andrew just said that he will try to contact whomever owns the wood if he can, but in many cases that’s not possible.

Right, and from what I can tell that’s tenant law. In that case it’s pretty clear who the original owner was, and in what state they left the property. (lost, misplaced, abandoned, etc). However, even in that case it’s pretty common for land lords to just chuck the contents of the apartment. (My brother in law does this on a daily basis)

In this case it would be lost property, and anybody who finds it has a claim on it unless the original owner returns. Otherwise any time you forget your hat in a restaurant they cannot do anything with it. They’d have to post stuff in the local paper, and make sure they asked everybody coming into the restaurant if it was their hat. Further it appears you’re implying that they would be unable to move the hat either, for fear the original owner would return to claim it. I don’t see how any court would find that a reasonable burden to place upon a business.

Thanks Daniel. I just see a lock on it so I wasn’t sure!

One thing about laws… they vary state by state. In a commonwealth, you cannot sign away a right without doing so in the presence of a neutral third party notary, and thus waivers are invalid unless notarized… Now, that shocks most people, but push to shove in a court in VA… the entry waiver is not worth the paper it is on legally. (yes, years were spent on this over waivers of liability for caving) I am hearing more and more people get really specific about a given law, not realizing that they vary both in enforcement, and actual statute all the time.

So… all the hive needs do, is put in the bylaws, any material or item, not otherwise identified by engraving, paint, or other permanent means (tape does not cut the mustard eh?) not in the storage box afforded the membership… left unattended… is just that, abandoned property, subject to immediate disposal. Bam… Done. "All effort made to notify and store abandoned property owners for thirty days prior to disposal… and back to being nice. One other thing to do, is if there are valuable items on loan… the wardens can always keep an inventory to be reported to the board of governors… But if it is not important enough for somebody to want to make sure is on the inventory… then it is not important enough for legal talk.

A side note on personal gear and items… One thing that works well is color codes… so lets say somebody has a hammer, and it’s at the hive. It’s got one wrap of blue tape on the handle. Blue = Andrew. “Hey! Andrew’s hammer…” with 8 colors and three bands… you can get a lot of people a unique code. I’ve been on cave rescues with hundreds of peoples gear, all in one big pile, and items find their owner. It would also identify all the general gear that is communally owned. Say Hive = white/black/white.

It’s human nature to put of the housekeeping when in a hurry, under the deadline, and especially if it can be foisted off on somebody else. I think this is a case of housekeeping that is overdue. Don’t be mad at the housekeeper for cleaning the mess. Odds are, they did not put it there.

We are going to have to possibly look at the bylaws with regards to left behind scrap wood in random places. I originally had brought up to Andrew about giving an extension past the holidays in regards to the quick removal of random wood and wood on storage. I think he has been more than great on communication about what is going on and organization. Over some random pieces of scrap wood that have not been labled etc. that brining up the court system is a good route for the hive. Especially given the burden the proof of ownership of an object un labled and burried in a random pile.
Going off of the original notice given about cleaning out the wood storage area and the fact that he has extended the removal of things well past his original dates. Especially him still giving people chances with things not removed and not just pitching it shows he is more than go out of his way to work with people.
Hell I wish I could help and take workload off of those at the hive but have been in limbo about possibly needing surgery from my gallbladder killing me. Then with all of the times I have had to go I for tests and stuff I managed to pick up brhoncitus and the flu at the same time

lol. I don’t want this to be looked at as an attack at all but rather a just another way to view things. If the wood in question was a ultra high dollar rare piece and someone was looking for a financial score by snagging it I doubt they would be posting warnings.
My fellow hivers, ask not what the hive can do for you, ask what you can do for your hive