First off, I’m sorry if I’m jumping the gun here, I know that “main” threads have been put up for the weekly purgatory notice, but I didn’t see one for the last couple weeks, so I decided to jump for it.

Kevin Schuler and I (Tim Wagner) have both called dibs on the contents of shelf E as of tonight, a picture of which is attached (Kevin has claimed the Nintendo 64 video game items, I have called dibs on the rest of the items). We both agreed to lump this into one email so as not to confuse and/or clutter the mailing list. 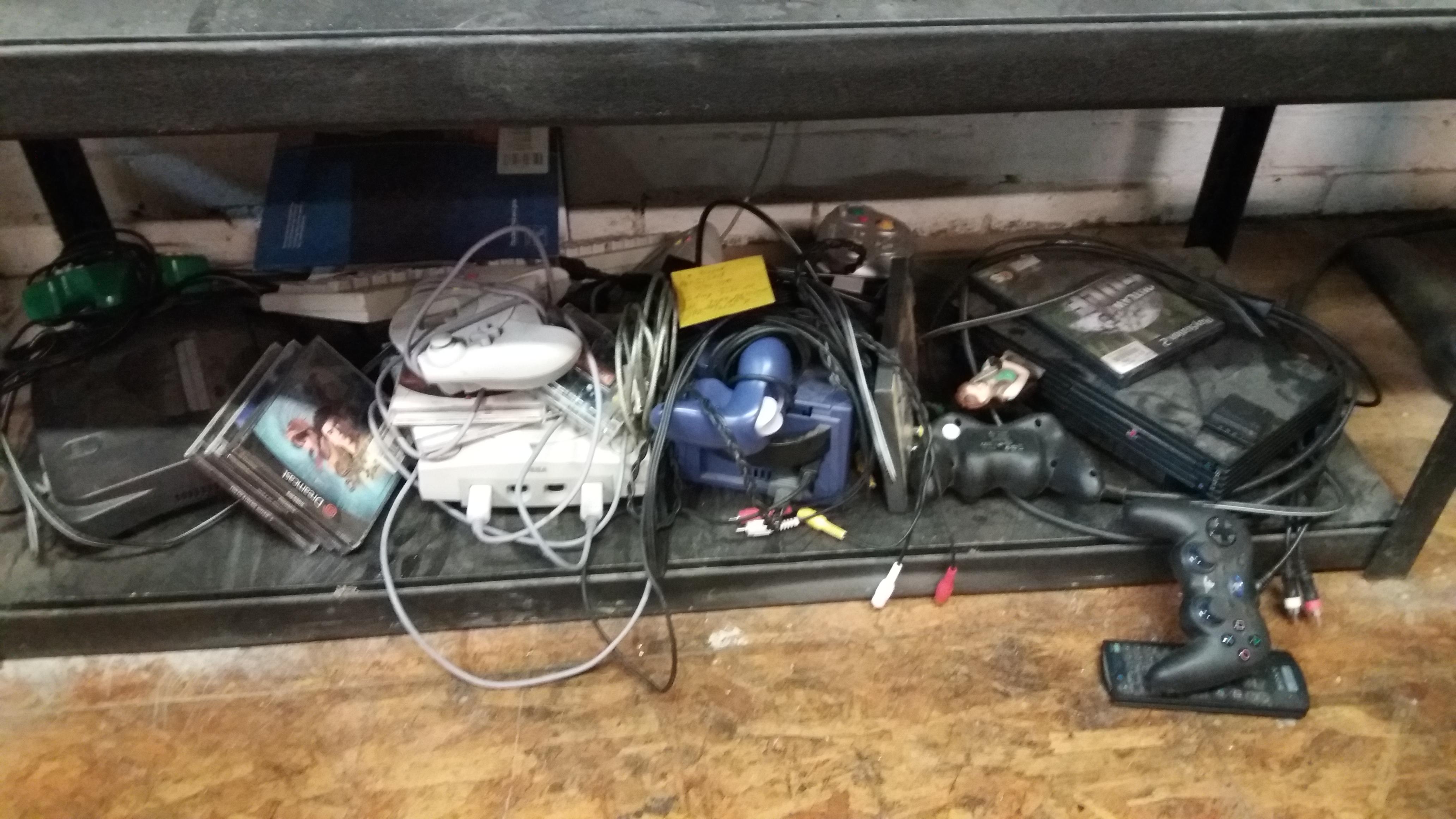 I think the one Nintendo game system was mine. Let me double check my game bin in the basement.

Sorry that should have said GameCube

seems a shame to just be rid of them.

I think the new purgatory system is working well. However, we do need to keep an active eye on it for it to be most effective. The whole point is to:

1st - Identify under-used items at hive
2nd - Find a home where items will be used and not trashed.

I think the biggest priority is that we all participate actively to make purgatory a resource. So, this is a great for folks to post messages like this to remind everyone to use purgatory to minimize waste, and maximize usage.

As much as I regret not rescuing those din-rail parts for the laser a month ago, it was my own responsibility to do so. In years past, hive really did have a hideous hoarding problem, and we’ll always be fighting the impulse to sit on hackable parts. However, Hive13 has been an infinitely better workspace and environment with less clutter, and the purgatory items that have gone home with members or visitors often enjoy good use.

Brad now uses an old power supply for his home bench which was not used at Hive.
A couple folks now have analog scopes to learn on at home.
I use the containers and parts bins I took over a year ago every day in my own lab.

Maybe we should consider adding donation as a disposal method in addition to trash. Items like this, if they weren’t claimed would be good donations to GoodWill or Easter Seals or other organizations. Even if a load of items going to goodwill end up being trashed, they are much more likely to be disposed of via recycling and e-waste. Maybe I could ask some of our connections in the community if they’d be interested in a monthly donation or taking on e-waste. I don’t think the COO should be obligated to do this, though. It would be easy enough for a couple volunteers.

Let me preface this by saying that if the original owner of an item steps up, I’m not going to stop them from reclaiming what is theirs. Their stuff is their stuff. Also, by my estimate the game equipment had been on the shelves for a couple weeks already, so this was not a case of Sudden Disappearance.

As far as the argument for keeping the equipment in the lounge, I would like to respectfully point out that, over the several years I have come down to the Hive, I have personally seen the video games used once. Granted, I am not coming down as regularly as I should, but the dust and everything being untouched sort of speaks for itself. The fact of the matter is, sure, it would be nice to not get rid of them, but (and I’m going to go out on a limb here) no one uses them. On top of this, the emulator arcade machine has been moved to the lounge and is available for use, so it is not like every single video game is leaving the Hive at once; we still have a fairly robust gaming option for those who want to blow off some steam in the lounge.

I know that, since I have called dibs per the purgatory rules on the wiki, it may seem like some of my claims might be a little biased. If a strong case can be made to keep the items at the Hive that everyone and the Lounge Warden can agree to, I’m willing to relinquish my claim, but I would still like to reiterate that, respectfully, these items were put on the purgatory shelves for a reason.

Following how purgatory is supposed to work. If it is your item and on purgatory, you can go over and take it off and take it home or put it in your storage area. Period.

Purgatory exists for items that are in the space that the owner is not known and are not property of the Hive. It gives the actual owner time to reclaim their items.
If after several weeks have passed, the owner has not claimed their item, then any other member that would like the item may claim it and remove it from the hive or put it in their personal storage. Items can also be claimed by the Hive as an organization if they will be re-purposed or used in an existing project.

So unless, Something changes in the sate of option 1, 2, or 3 prior to the time of reckoning, I would call the claim of dibs to be in good standing.

So we say all.