My 2 personal polar 3d printers have a slight hickup. I have not been 3d printing in a very long time and have not used them since bill was helping me with “Flashing” (?on the term lol) the firmware if I remember correctly to help me with temps on abs and other plastics. I have not used them since that night and am using the same exact setup, gcode stuff, and polar 3d software wise and repetier settings as before just to throw that out there. What my problem is that somehow when the print starts it thinks the bed height is different than before. Both printers went under minor changes on the hot end but I made sure to keep the lengths the same on the new ones i made to try as the old one were. Sorry if this this is mindless rambling to most so I will attach a picture. The print nozzle starts about 1/2 to 5/8 of an inch above where it should and this problem did not arise until after some temp changes that were made to the firmware at one of the meetings. Any help you guys can get me quick would be awesome as im finishing printing some stuff for the power tool racing and power kart series in detroit and have to get these running. Sorry if it is something very stupid I need to do I just don’t know how to change anything in the “firmware stuff” other than a youtube walk through video on an xyz printer i got crazy cheap. Thank you guys!!! Willing to travel to hive or wherever to get fixed asap and will include a camp washington meal lol or whatever to get going again. 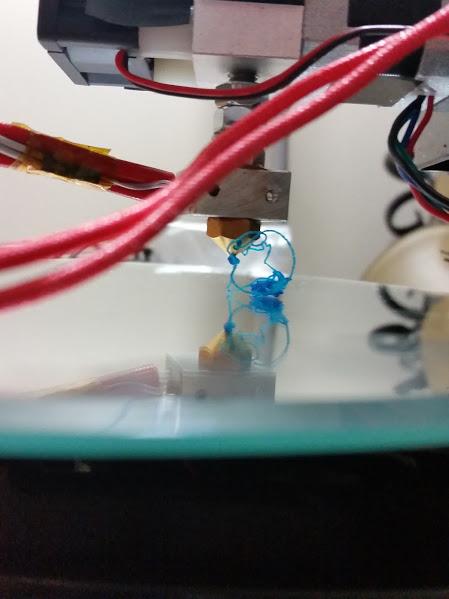 Kevin,
Obviously, Bill is the “man” for this but I recently went through a similar problem. I plan to be at the meeting on Tuesday so bring them down then and we can tune them up.

But, here are some observations:

These probably aren’t your issue but check it anyway:

I will have them down at the hive for the meeting, the tube is in the right position and when trying to do the manual commands it wont go bellow where is believes the build plate to be. all steppers are running smoothly and as for the wiring its temporary, its hooked up to a barrier strip and I left a lot of room for when I get it tuned back down to the plate and im also going to pint a led light mount for the fan. Also I have 2 printers doing the same thing after bill helped me out with getting the temps higher in which I thank him a ton! He is the reason I have the printers and hate to bother him because I can only imagine the people like me that have to bug him all day long about stuff. If you could so me how to relearn the home on these at the meeting I would greatly greatly appreciate it I will have the 2 printers in the fab lab. Thank you for your reply!!!

The values you are looking for are on the M206 line… you’ll net to reset the X and Z values to tell it the distance to the center point. Save with the M500 command.

M206 X13 sets the distance from the nozzle to the middle to 13mm… likewise, M206 Z4 sets the height of the nozzle above the build plate to 4mm… you need to find the exact distances and set those offset values so it knows where the center is.