Just trying to gauge general interest and if the space/possibility even exists.

I have quite a bit of experience with podcasting/studio setup and teaching others how to get started. We could even have our own Hive Radio Station broadcasting 24/7 with shows that members create (and thus attracting new members who would like to get their show ideas on air). We would need space for a booth to be built, fully enclosed with enough room for a table holding a computer (always running to keep the station on air) with a couple of mic stands, 2 chairs, etc. quiet air circulation (a closed in small space gets hot quickly). Staple or glue some foam to soundproof the booth, and boom, we’re live on air.

I could set up the online radio “station” host training classes and get schedules set up. Anyway, the space seems to be the first question, besides interest of course. Just feeling out who might like to do what. I could also get us onto iHeartRadio, Spotify and other big name resources so our shows get some pub. Of course, we have content rules for our podcast producers so they aren’t ridiculous on air under the Hive name.

Let me start with this would be pretty awesome. If we do something like this I would like to have video recording available also for Video podcasts/livestreams.

My big concern right now is space. Where would we put this? The Annex is filled with the fablab, the old fablab is out new social area & meeting room, I dont feel we could shrink that at this time for a dedicated space for a studio space. This kinda goes back to my other subject, where we need more space. So I would say we need to come up with a plan to where we could put it more than anything else.

I think the best option would be to use the meeting room as a makeshift space for it. No need for a dedicated space, just get some good equipment/accessories and an “on air” light

the other option worth pointing out is that a bunch of the local libraries have this capability available for anyone with a library card.

I think this is a great idea.
I believe we should start small (and inexpensive) and see how things go.
We can play with various mics and sound proofing stuff easily.
Video will get a bit more complicated, but can still be done with a webcam and simple lighting.
There is a “crappy to good” curve that can happen with minimal effort/cost.
The “good to awesome” part can get expensive and complicated quickly.
I’ll do some digging.

I think it’s a great idea too. It’s worth looking at the “Let’s document how awesome our members are.” thread Lorin started last year - https://groups.google.com/d/topic/cincihackerspace/5ZNmSCw6OT0/discussion.

Since I’m awful at finishing projects on my own (or, in some cases, even starting them), and I hate the sound of my own voice too much to want to be on a podcast, I was considering trying to write some Hive13 blog posts documenting the projects of people who actually do them. Having relevant audio/video could fit well with this.

All good comments to help me with the thought process so far. I can say the idea of the libraries though really won’t work for a variety of reasons, but the 3 primary reasons are A) they only are big enough for one person to be in at a time and do not allow for interviews, 2 person shows, etc and B) they have no internet access to those booths, so they are strictly for recording only and C) if you wanted to have a continual online presence as a “station” you couldn’t house that from any of the libraries.

As for using the space in the meeting room, that really isn’t a great idea, but might be a start. The fact is even an inexpensive mic is going to pick up the most quietest of sounds and amplify them. If someone was to come work in the facility using a power tool or hammer while someone was recording (even with the doors closed) it would be a fiasco for the podcaster producing the show. The windows would reverberate the sounds and the mics would pick that up just like you were standing next to them.

The comments regarding video are a natural progression and can be done fairly inexpensively. However, we really fall back to someone trying to do a show with the possibility of having others talking in the background, using tools and things really won’t make anyone happy that’s trying to do a good job for their podcast. As for the pricing, having set up studios for others in 13 cities across the country, I have some good pricing on things (mics, stands, board, computer software) etc. Also could be that some of our members with musical background have older mics and stands they could “donate/loan” to the cause? However, first and foremost, this doesn’t truly go too far without a quiet space to do so. That is really the heart and truth of the matter. Even at my house I had to build a soundproof room because of barking dogs (neighbors) cars on the street, people in the house, floor boards creaking when someone walked, coughing or sneezing 2 rooms away. All things that a mic will pick up like they are sitting next to you. Someone who wants to take their podcast seriously would easily get irritated with a bunch of other background noise. Just my experience with the situation from other locations.

Blotting out all forms of Hive noise is doubtful given the sound power of the CNC router, air compressor, saws and HVAC. Might need an anechoic chamber quality sound absorber.

That said, Hive just acquired a table top mic for remote session communication. It worked very well Monday evening. If you aren’t on a 24/7 schedule there are quiet times in the lounge. How much more does a podcast need?

I would propose doing some tests with the new mic in the meeting room and just see how bad it is. If we can get by for free that’s a great start.
We got our son a small sound shield to go around his mic and it seems to work pretty well. I could bring it in Saturday and we could test it out

Hodapp, If you want to help wrangle items on some of the projects at the Hive that would be awesome. I was talking to Vicente last night about his Altair that he is building. I don’t know if you have seen that, but he’s got some great pictures and writeups he’s posted. I also know that 2 of us are working on the Power Series Racing car, which half the time I remember to take some pictures of while working… I mean to write up a build log on that with the pictures. I just forget. Then Don’t. The whole time Mason was working the the Architetual model, I meant to ask about shwoing that off after he was done with it.

Those are the things that I know about off the top of my head. There are a lot of great things that people are working on that we could be showing off, but we just don’t.

That might all make the start for interesting items to discuss on a podcast, in addition to being nice to create a BragBook for Hive13.

I am actively in the process of setting my recording studio up again at home after being decommissioned since last summer. I MAY have a spare two input Focusrite Saffire USB 6 audio interface and a large diameter condenser microphone (as well as cable and stand) that I could lend to get started with. Although this might be overkill and maybe keeping it simpler with a tabletop USB microphone might be preferable. Hit me up if interested.

As far as sound isolation goes… shouldn’t a maker space have background noise? It could add to the charm and noises could be embraced and explained instead of prevented. A nature podcast has nature noise in the background. A maker space podcast has CNC routers. As a former professional audio engineer I can tell you that at our space you’ll never get rid of the noise enough to fool a decent condenser mic.

Is there any sort of standard-ish place, e.g. on Dumpstor, to keep “official” photos and videos? Right now I think it’s a bit of a mish-mash, but I definitely have piles of pictures from over the life of the Hive.

I’m fine with organizing other people’s media here if they point me to it, even.

Saturday I’ll bring the sound enclosure wall thingy our son uses, and a USB Blue Snowball mic we have just to test the space.

I have quite a few things that I can donate to the cause to help set this up. As for the background noise, for the podcast(s) that would be on topic about makerspace topics then yes, having some ambient “working noise” would be fun I would think. However, if we’re to possibly target new members for the virtue of them having a place to get a show online, they may be more focused on non-construction topics and would not want said ambiance. It’s all a matter of who the target audience would be. As for me saying the meeting space wouldn’t work, let me clarify my intended meaning. I didn’t mean to state it would NEVER be helpful. During times (especially late) when no one is doing the noisy stuff, then it would be a GREAT time to use that space for that reason. We could then have a computer running the radio station software to upload the freshly recorded shows. So yes, there would be SOME time that the space would be quiet enough to be fun, and yes, those doing “maker” types of podcasts will probably benefit from the background sounds. It would be the others where the noises would be an issue.

However, I am ALL for helping to get this thing rolling (since I started the thread lol) and promote to potential new podcasters/members that we have a place for them to be. What time Saturday where ya’ll thinking? (After the door cutting extravaganza?)

All this talk of portable sound enclosure got me thinking. I’ve seen something for generators and things and found this photo as an example. We could build portable “walls” to create a temp sound space in that room with doors closed and put some moving pads with foam glued to them or something to dampen the sound. Might actually be something with temp barriers. Same thing as I’ve built elsewhere but in a more temp/mobile manner to be stored out of the way when not in use instead of perm walls. Now I got some things to work with. Do we have an actual phone line into the Hive that could be used for guests to call into? Of course Skype is always an option too. Just thinking forward of course 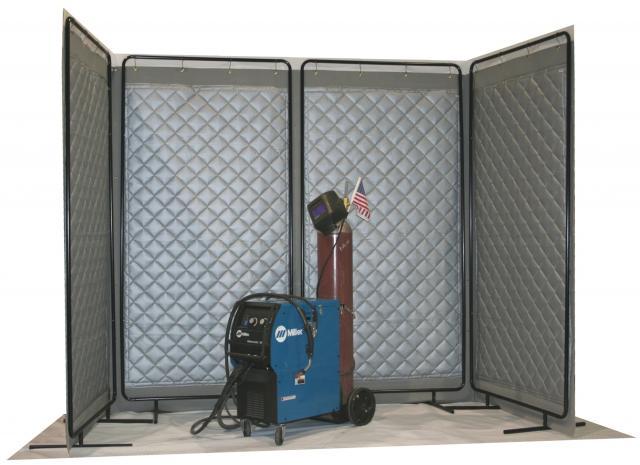 Rockwool is outstanding for sound dampening and isolation purposes. It’s typical use is as a medium to seed plants (think hydroponic gardening). It comes in sheets of various sized cubes. The large cube version is top notch for sound purposes and I think still falls into the realm of affordability (as compared to commercial sound dampening material.

This makes me want to dig up the scripts I wrote in 2007 that pull podcasts off their RSS and feeds them to an Icecast server.

Here is a pic of the mic isolation wall thingy. 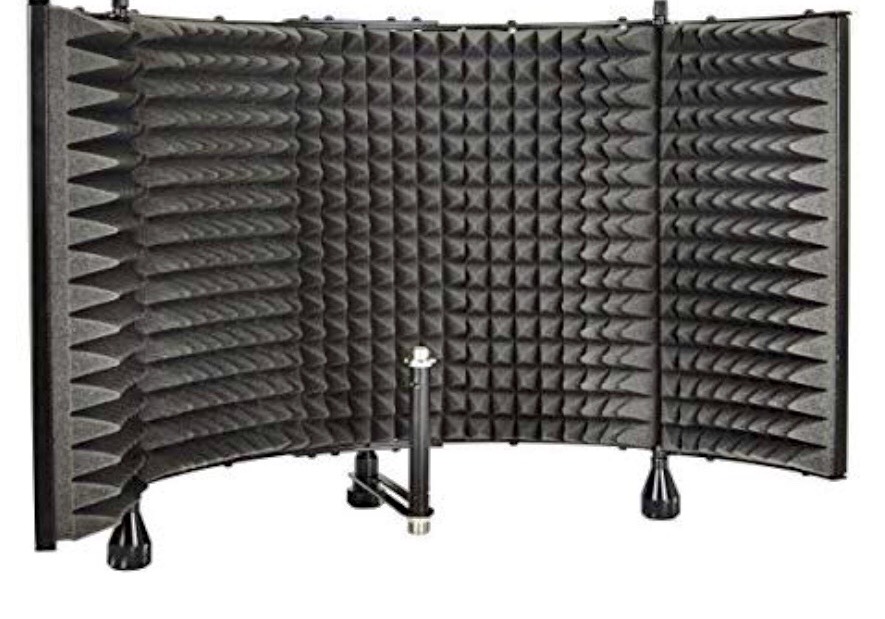