Please No Plywood Through The Jointer

Little known fact: the glue in some plywoods will damage the jointer blades.

AND YOU PEOPLE DIDN’T BELIEVE ME ABOUT NOT SENDING GLUED ITEMS THROUGH THE PLANAR!!!

Joking use of all caps

Oddly enough he comes to the conclusion that yellow glue ie titebond, is fine and they have special, harder glue in plywood.

Anyway I don’t know why anybody would send a glued board through, planing usually is WAY before any glue is applied.

FWIW I bring this up because I caught somebody who should know better,( but didn’t, honest mistake) putting plywood through, so I though I would share with him and the membership as a whole.

Does that qualify for “needs training” under item 2?

"2. It can damage or destroy itself in an expensive and potentially non-reversible way if not used properly."

But seriously, maybe a sign (cut on the CNC router? ; ) ) that says “no plywood or painted wood” on the jointer and planer.

There is a technique which involves sending glued up boards through the planer, but not the jointer.

Say one wants to glue up a table top.

Joint and plane the boards.

Glue up the top in sets of 2 or three boards, resulting in a width that still fits the planer. (Be sure to scrape off the squeeze out at about 20 minutes drying time!)
Run these (dryed) assemblies through the planer, then glue up the table top.

Much less sanding/scraping/hand planing required on the final assembly.

Good point, I just did exactly that with the bench top. From what I can tell the planer hasn’t suffered any ill effects.

I’ll give some thought to what to put on the various signs for the equipment. I think for the jointer:

And maybe a picture of a horribly mangled finger for impact . . .

No painted wood. Some paints are rather hard on or gum up jointer/planer knives.

Good point John, I’ll add it to the list.

Attached are photos for safety propoganda…I have some good burn ones from back in my racing days as well I might be able to find. enjoy 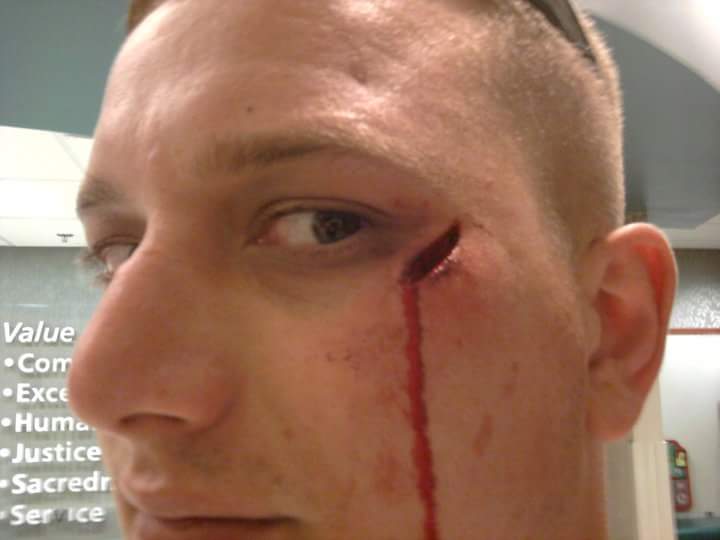 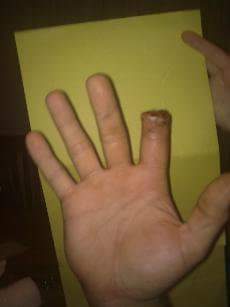 Lol instead of a paper figure I’m a much better demonstrator for eyewear, what to wear, not wear, what can remove body parts etc. I know it’s graphic but it make a hell of a wake-up when you get to conformable sometimes.

What caused the gouge under your eye?

Thanks.
Thought I was looking at a Walking Dead scene.

The eye one is 3 years ago, slap shot to the head… I got lucky, real lucky. however, I have had tools, equipment grenade and throw stuff sending me to the eye doctor to get debris removed. Sadly I’m still bad with remembering to throw glasses on. I’ve been mangled one to many times lol.

I usually fasten boards together with nails and staples before putting them through either the jointer or the planer… I’ve also used both those tools to remove components from old circuit boards.

You are now officially banned from the wood shop. Thanks for playing!