Are there any pinball fans in here? I would love to find other pinheads in the Hive13 membership.

In a previous life (career) I was a pinball repairman.

Currently, Black Knight is working but it needs some TLC and I’ll be doing some overdue maintenance and bulletproofing in the very near future.

Pink Panther has been in storage for 10 years. I’ll be getting it out soon (after I finish refurbishing Black Knight.) It was working when I put it away but who knows what kinds of issues I’ll find?

If you’re into Pinball machines, even if you don’t own or work on them, I want to hear from you.

Building a pinball machine has been on my maker bucket list for a LONG time, haha. I am very interested.

I also am interested. Although the nickname is not the best.
Maybe “Wizards” or “Geezers” or “One more quarter” . . . . .

ahh Memories. When I was growing up, my parents had a Dodge City machine in the house. That was pretty awesome for an 8 year old boy…

Totally support that!
We could scrounge around for a not totally destroyed machine that needs some love.

I started this thread in hopes of finding others to share in my excitement for all things pinball.

I hoped to find others that wouldn’t be bored to death by me talking about repairing my own pinballs. I was just hoping to share the process.

But, if you guys are into doing a project at / for the Hive, I would LOVE that!

My Pink Panther is probably in too good shape to be a candidate for such a project. I don’t mind bringing it in for the refurb though. (I plan to shop it as best I can and eventually sell/trade for something nicer.) (My other two machines will be in my collection forever.) (well, everything has a price.)

That said, let’s start looking for a project machine.

Scott, I also have a pinball machine. Crystal Castles, I’m not as sophisticated as you younger guys. Right now the game is not working. I believe it needs a screen. When I get that fixed, I plan to sell
it. It takes up too much space. I also have the same game parts, (original mother board, controller, etc.), that I would like to make into a counter top, with LCD screen.

Sophisticated? Dodge City was apparently produced in '65 https://pinside.com/pinball/machine/dodge-city. It might have been Sophisticated for he time, but it was nothing but a mess of switches and wires inside. It had a cool dancing man though…

Crystal Castles was a video game released in 1983 by Atari.

I intended to focus primarily on pinballs but I don’t mind talking / helping with vids.
I have two video cabs.

One is a generic Dynamo 19" CRT cab. It had “Thunder Jaws” in in when I bought it for $50 mid-90’s. I converted it to “Golden Axe” and then later put a computer in it and ran MAME.
The other is a 4-player, 25" CRT (medium def) NBA Jam / NFL Gold 2000 combo with a bad hard drive and/or bad video card. I plan to convert it to MAME at some point.
Both of these cabs are in storage right now.

As for “younger guys”, I’m not that young and two of the three pinballs I own are older than your vid. lol

Count me as a pinhead too. We acquired a used 1992 DataEast "Hook" back before our daughters started high school, and it has been great to have through the years. We'll hang onto it for future grandkids to play. It still works great and is proof that pinball talent is a learned skill, since the 3-ball multi-ball is easy enough to achieve on a semi-regular basis.

Nice machine. I am trying to remember. I think that had some fun video modes.

Pinball is definitely a game of skill. Many regard it as random luck. I’ll admit that there is a lot of randomness to the gameplay but I say the skill lies in controlling how much randomness.

Launch the ball with just enough spring force and toggle the top lights to maximize the score in the top active lane; then make a few strategic nudges to hit mid-field targets (without setting off the tilt); and let the ball drain down to catch it on either bottom flipper. Call your shot and let off to have the ball roll down the flipper and then fire the flipper at just the right moment to pick-off the next desired target (hole, ramp, or drop-down) to activate the next high-score target and repeat until your score crosses the threshold and you hear the satisfying "thunk" that your skill just won you another free game.

You can play all night on one quarter, even if you set the machine up for free games anyway.

Old-school pinball is a wonderful battle against gravity with an over-abundance of electro-mechanical real-world physics applied to a hefty steel ball with lots of blinking lights and sound-effects. Who doesn't appreciate all that, especially if you're drinking a few beers with good friends.

Look what I brought home from storage… 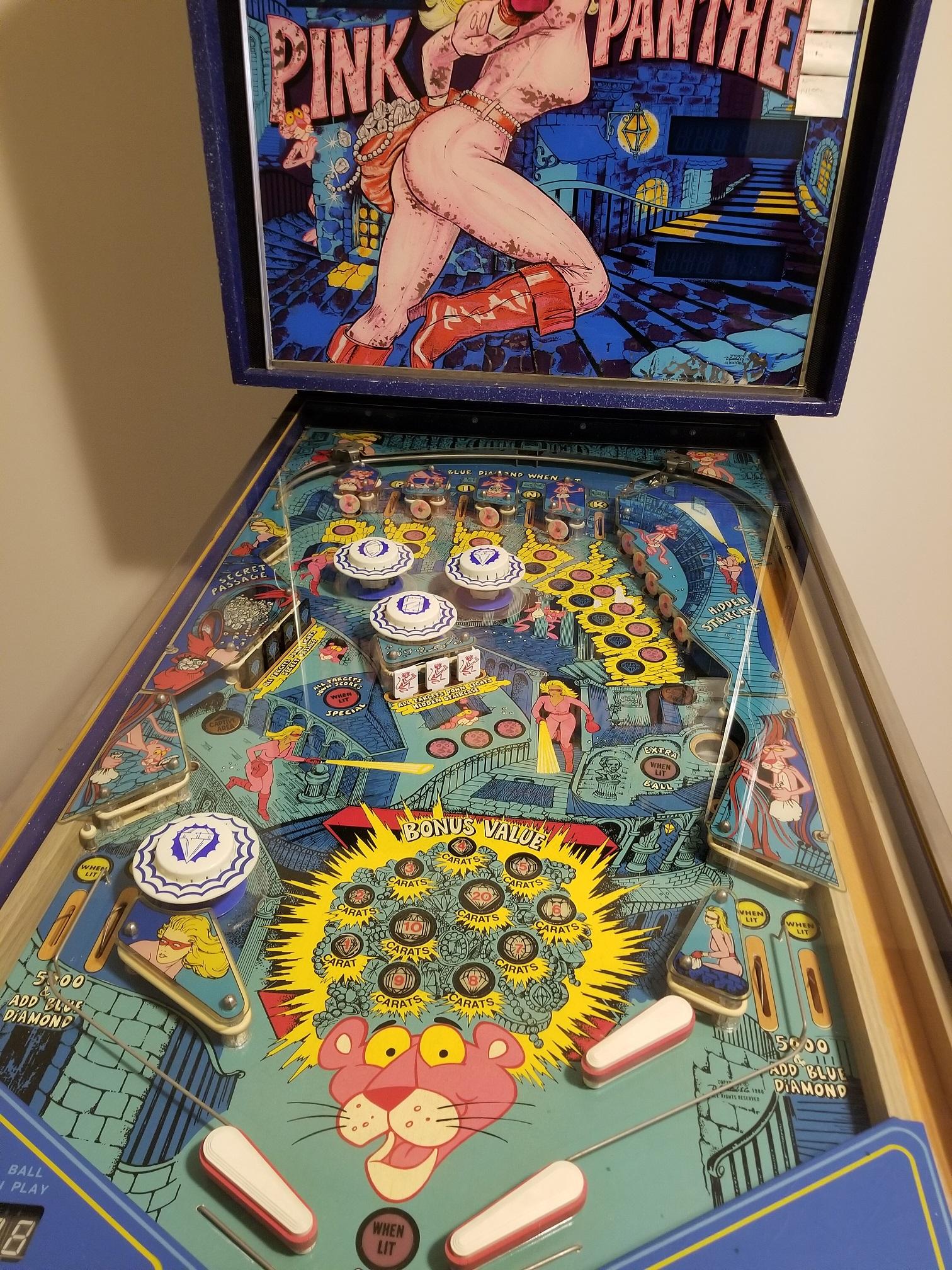 (I don’t have the nerve to power it up before I go over it carefully.)

Ha. How politically correct. I forgot about some of the murals on the machines.

Looks like an awesome machine. Love to dig into some of the mechanics.
Feel free to bring in any components to talk about.

Late response, I literally just emailed about pinball machines. I’m going to try and attend the public meeting this Tuesday the 18th. I’m working off a custom pinball machine biased off a 79 Brunswick Demolition Classic. I’m wanting to focus the design on the Toyota first generation MR2 and redesign the play field. I’d like to pull all of the electronics and parts off to bring the board to drill holes for targets and maybe square holes for 2 pop up headlights in the board that rise up like a trapdoor (like Funhouse trapdoor), and make all of the scoring Arduino controlled. It’s kind of sat on the shelf for a while, but I’m hoping once the holes are drilled, I can focus on the design for the play field vinyl.

I’ll be happy to show Tuesday and meet people. Thanks!

Hey Noah, glad you found us.

I have every intention to be there on Tuesday. I usually get there early just to hang out. I look forward to meeting you.