The Ultra-Bot 3D printer built with various donations from myself and Bill Steele is nearing completion. At this point, it’s in the fab lab pretty much assembled. The stepper motors, hot end heater, etc can be operated from Repetier.

The software needs tweaking but I’m a bit over my head…The firmware on the Printrboard needs to be updated as a start, but my attempts at following different upload instructions have all failed. I usually get this error in Arduino:
Connecting to programmer: .
Found programmer: Id = "Bö"; type =
Software Version = .; Hardware Version =
avrdude: error: buffered memory access not supported. Maybe it isn't
a butterfly/AVR109 but a AVR910 device?

So, 3 areas where I would be very grateful for help:

If you want to help with one or more of these, please let me know! I’ll be at the Hive tonight from about 7-9 and also at the meeting Tuesday…

The firmware is now fixed on the Ultra-Bot based on my own settings… so it should be very close. We might have to make some minor tweaks for the steps/mm settings… but that’s it.

The extruder appeared to get very hot the first time we ran it… so we still need to tweak it a bit.

We’re so close to the first print that I can taste it.

A fellow, Vance, was trying to reach you and I’d sent him your other email. I will have him contact you on this email.

Its alive! Mike is still tweaking it though…

The bottom half of an owl, printed on the ultrabot before the extruder jammed! Still some work to do. 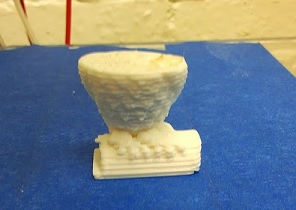 I saw it, it was exciting.

Sweet!!! The video looks great too!

Thanks Bill! And thanks for your help on Tuesday getting it setup!!

Hopefully I’ll be running it at the next meeting. Some things still to fix:

Yep, the firmware has a wobble setting that can compensate for the bent rods... And the extrusion flow rate is a little high as well. I looked at the test part today. You might be able to just turn up the current on that x axis motor to compensate...oh, yeah, and oil the rods!