The remaining leveling feet came in (along with nuts and washers).
So now we have all 6 ready to do. I cut down the ones with the 6" long studs to match better the other 4. Used the small metal band saw and it worked great. I think the new blade was a big help. Not sure who installed it but thanks. Wonder if we should still keep the older one as a backup?

I shifted the lathe toward the door to keep access to the electric panel. The manual says 30 inches of clearance on the back but I shifted it to be about 18 inches away from the wall. Let me know if that position looks ok. We can easily move it around, for now.

I did a test lift with the hoist and the two green lifting straps. I was able to get the heavy end slightly off the dollies. The straps were doubled up so I don’t think they were anywhere near their limit. (see end view pic).

The other fun part will be lowering the lathe in steps on each end. I didn’t want to try this alone so everything is returned to the original setup. (Dollies on the far ends).

I’m open to any other ideas. I know we spoke of getting another engine hoist and holding up each end of the lathe and just removing the pallet base. Sounds great. We just need to get another hoist. I think Dave offered his but we will have to help him get it to the Hive.

We still need to get the 220v plug for the electric.

I also haven’t filled the main gearbox yet so don’t run it. The v belts are not installed so you could test the motor if you want to verify the electrics. 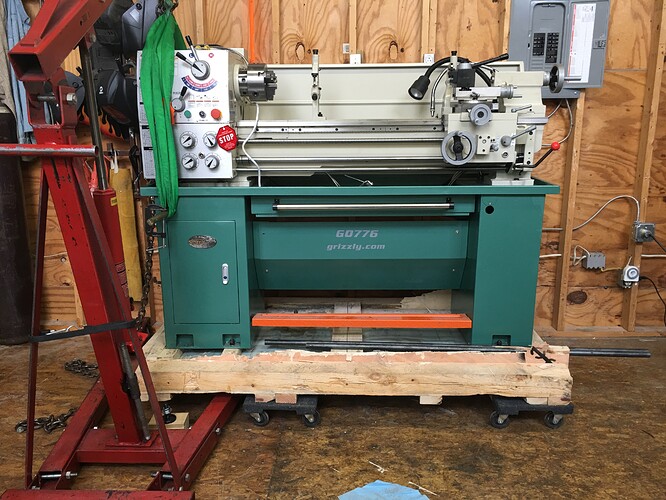 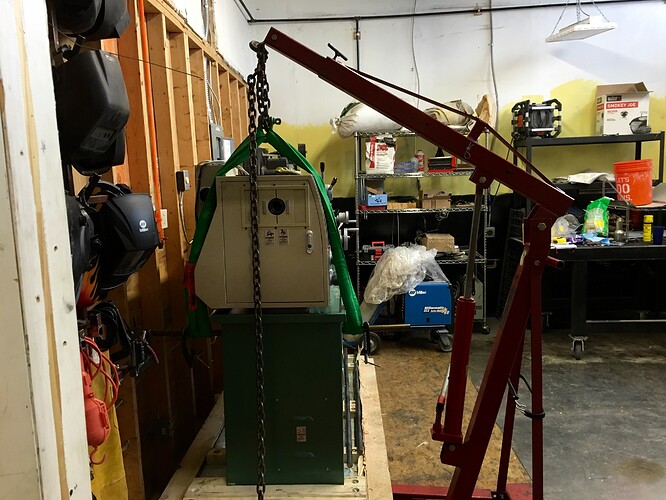 The lathe is sitting on the floor!
Thanks to Dave for bringing his engine hoist, and Greg for providing his.
Dave and I were able to get the lathe up and pull off the pallet base.
We installed the leveling feet and lowered it into position.
I noticed the plug was installed. (Thanks).

I still need to do some more stuff (install drive belts, fill gearbox with oil, level the bed, break in the gearbox) so please don’t mess with anything till we get it together. I’ll try and come by the Hive tomorrow and begin the startup sequence.

We will have an intro walk through once it gets to spinning and making chips. (Maybe by the Tuesday meeting).