Dave pointed out that it was dark in the corner where the wood lathe currently resides, so I brought in a fixture I’d been meaning to put somewhere useful for a while. 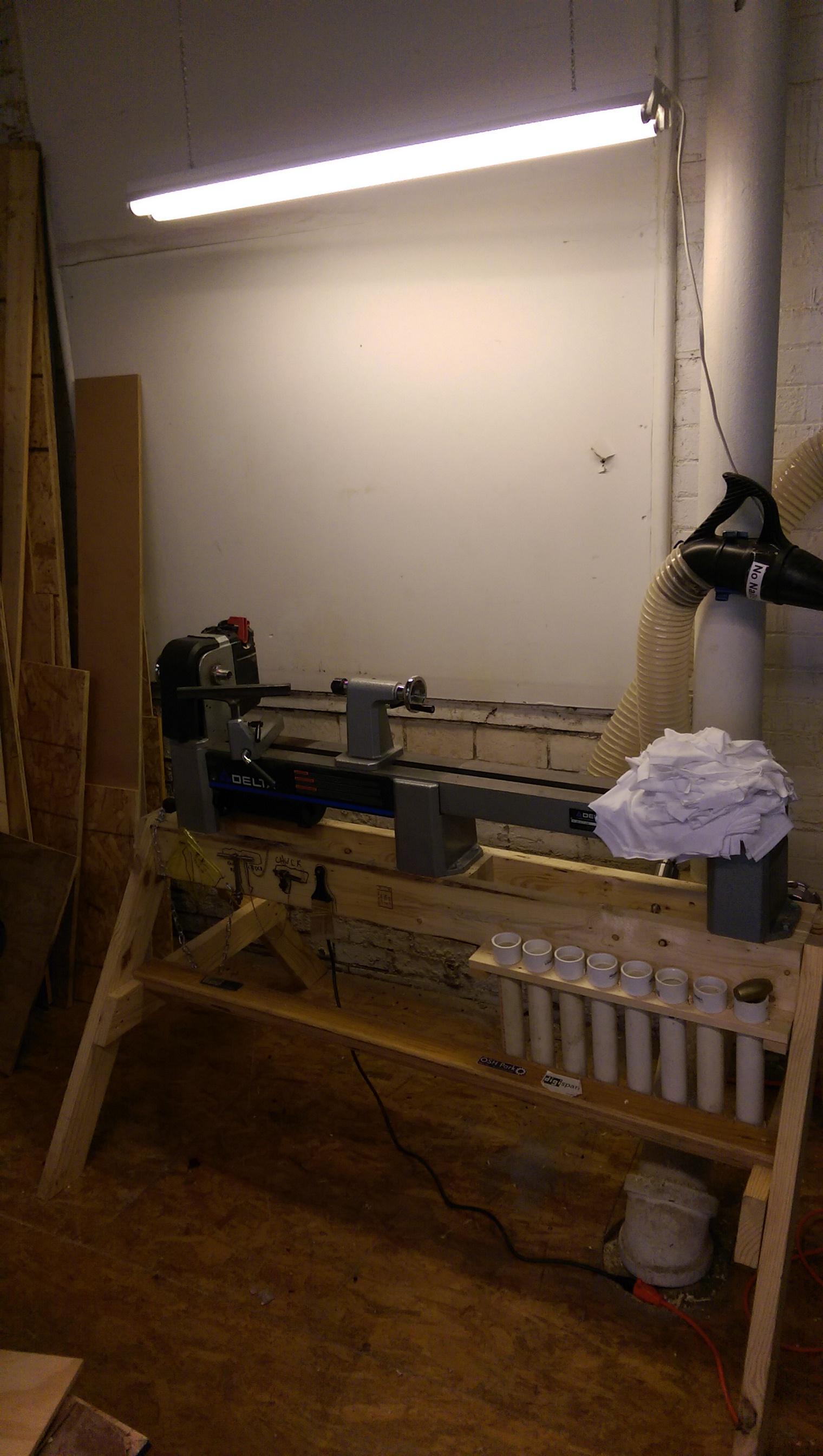 nice! Hey Andrew, would you be up for teaching a lathe certification class soon? I’d love to learn to use it!

Honestly Tiffany, I don’t feel personally comfortable doing much more than showing people how it works. I’ve turned about 3-4 things in total, so I don’t think my teaching a class is fair to any “students” Clay, Will, Matt, or John all might be good candidates.
I’d be happy to demonstrate what little I do know to anybody who’s interested. I’ll be holding Warden hours sometime next month I can definitely show people then.

Also we don’t have a certification requirement on the lathe, nor do I want one.

I think just having an “intro to the wood lathe” class would be very helpful.
Basics; how it works, how not to hurt yourself, how not to break it.

Good job on the light.

I think I would like to setup a switch on the light over the hand tool workbench. People keep turning off the power strip which turns off the battery chargers.

Good point. FWIW, I also moved that light, such that the chains now run over the I-beams instead of using the sprinkler pipes. Old approach wasn’t terrible, but unlikely to pass a safety inspection, and it was like 10-20 minutes to adjust it.

I’ve found that takes me 10-15 minutes, and I keep offering, and not getting a lot of interest. Right now it’s just easier for me to explain one on one than attempting to do more rigorous class. This goes for most of the tools in the woodshop, and I’ve been having monthly warden hours. It’s also easier for scheduling around whatever might be going on with my son.

If somebody else is interested in doing a formal class then that’s great.

Previously, it was concluded (I think) that users would bring (& sharpen) their own tools.

Nothing is ever over, at least not at the Hive.

My position has been for some time that I will not be sharpening tools, nor will I proposing that the Hive buy anything that needs a routine sharpening. This includes chisels of all sorts, hand planes, and chisels for the lathe. With lathe tool in particular they need to be sharpen every few minutes of work.

That having been said I’m usually willing to loan out my tools for a bit if somebody wants to try, and I feel they won’t be a danger to themselves or others, or ruin the tools.

Thanks for the clarification.

I have a question about the lathe that I would like to ask outside this “Google Group”.

Could you get me a link?

You’re assuming he doesn’t want to talk to me privately, probably to upbraid me for my behavior, which has been a bit too helpful of late. Need to go back to being selfish and needy.

It also might help if there was a bit list of helpful email addresses somewhere like the wiki, or webpage, or part of the new members introduction package. I just found out about the leadership@hive13.org a month or so ago.

You mean like a “Contacting us” section on the front page of the wiki? Man, that does sound like a good idea.

No, that’s for external guests showing up for the first time. Also neither the wardens nor the leadership aliases are on that page.

Maybe the membership and leadership page should have some of the common email aliases.

I think you are referring to the Contact Us page on the blog? I mean on the front page of the wiki, which does list both the leadership and wardens list. If you think it should also be on the membership and leadership page, feel free to add it. That’s the beauty of a wiki.

I’ve made some hopefully useful additions to the wiki. I’ll think about making some signs to hang up around the hive.

I have been meaning to do that for a couple things Andrew. I would do it when I'm thinking about it, but I typically have a belt sander,

Or some other piece of equipment in my hand at the time.

My attempt to avoid cluttering up this thread has resulted in a cascade of…
emails only obliquely related…cluttering…up…this…oh, never mind.