Does anyone know of a method of calibrating the spindle in mach 3?

The red LED display was previously showing information that was not the spindle rate, which I adjusted using the >> button to cycle through the displays until the display was correct. It is now displaying the correct spindle rate which I verified with a Tachometer.

The speed rates I am entering into Mach 3 are not always matching the spindle. I managed to demonstrate this to Mike the other night (It doesn't always do this, but sometimes it starts spinning way faster than it is told to) One theory is maybe it was not recalibrated after replacing the spindle.

On a side note, I have been able to adjust the over ride to get the desired speeds I was looking for and got beautifully smooth cuts.

Yes this can be done for sure. If I were trying to do it I’d go to the Mach3 website or search Google. The amount of things Mach3 can do is amazing. We have only scratched the surface in getting everything calibrated.

Well I saw the built in calibration of Mach3 but also read many many ( yes two manys ) threads on forums about not using it as it would give undesired results.

I also did some digging into the Mach 3 manual and I am seeing there are 3 ways to set your spindle speed and based on the information I can find we are using the PWM method.

When I was reading the setting for the PWM and the specs of the hardware to our current settings things were not matching up (pretty drastic differences) so I just didn't adjust anything and wanted to bring it to the mailing list.

Tim, I’m happy someone is looking into this. From past research I thought I read something where you could basically set it at a current speed/pwm setting and tell it the real speed. Doing this multiple times every few hundred rpms should give us pretty accurate readings.

Well if that is the case, I believe my next step is that I'll copy the existing profile (or start a new one) and start tweeking the settings in that menu you mentioned as to not disturb the current profile everyone is used to.

I originally started this adventure because I was double and tripple checking my speed and feed rates but yet was getting tearing on the wood and made a few general posts online and everyone said check your feed and speed rates. Knowing the feed rates are driven by DRO and then calculating the distances divisible by time or by the microsteps in the motors and the gear ratios(both very accurate), my assumption lead me to the spindle speed which I was definitely reading from the wrong display originally (in hindsite), it does display proper information now(verified with a tachometer), if we can get it to pass this information to mach 3 I imagine we will be sitting pretty.

Manually adjusting the spindle rate after the job starts by using the override has allowed me to get extremely smooth cuts although for more complicated jobs which will change speeds multiple times in the same job this won't be as easy to manage.

Tim,
Side note: Care to snap some pics of what you’re making? It sounds like you’re doing neat stuff and I’d love to see.
-D

Sadly Dave, I mostly was just doing some basic cuts and learning about the machine but, the vcarve software has lots of outstanding demos I was wanting to run and test out. The tearing on the boards from basic cuts made me hesitant to move beyond or past these.

I attached a picture of a small Colosseum tool bit holder I am making which is the one that had extremely smooth cuts, the other two are what I was originally thinking for the design to place on the front of my box. 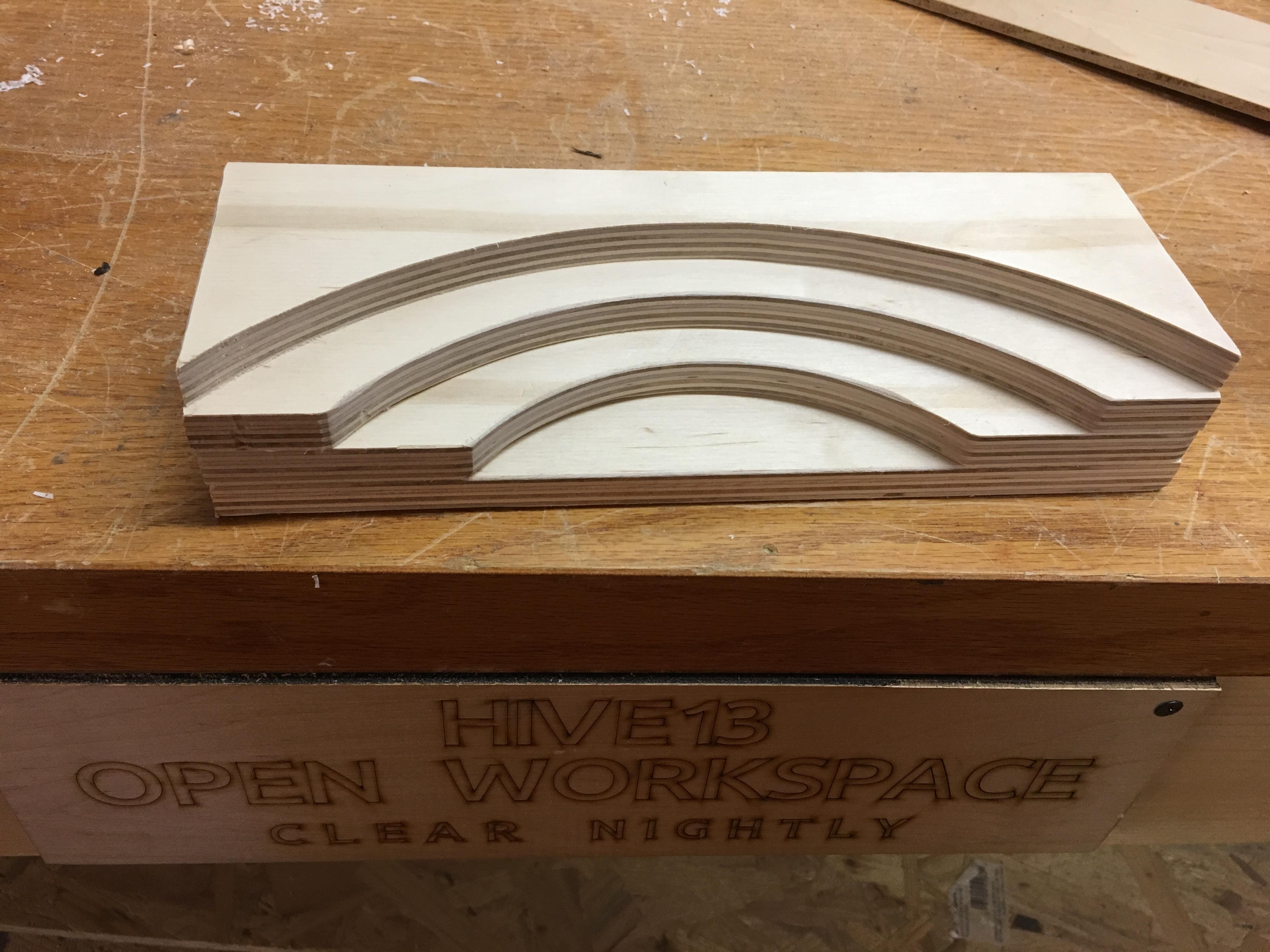 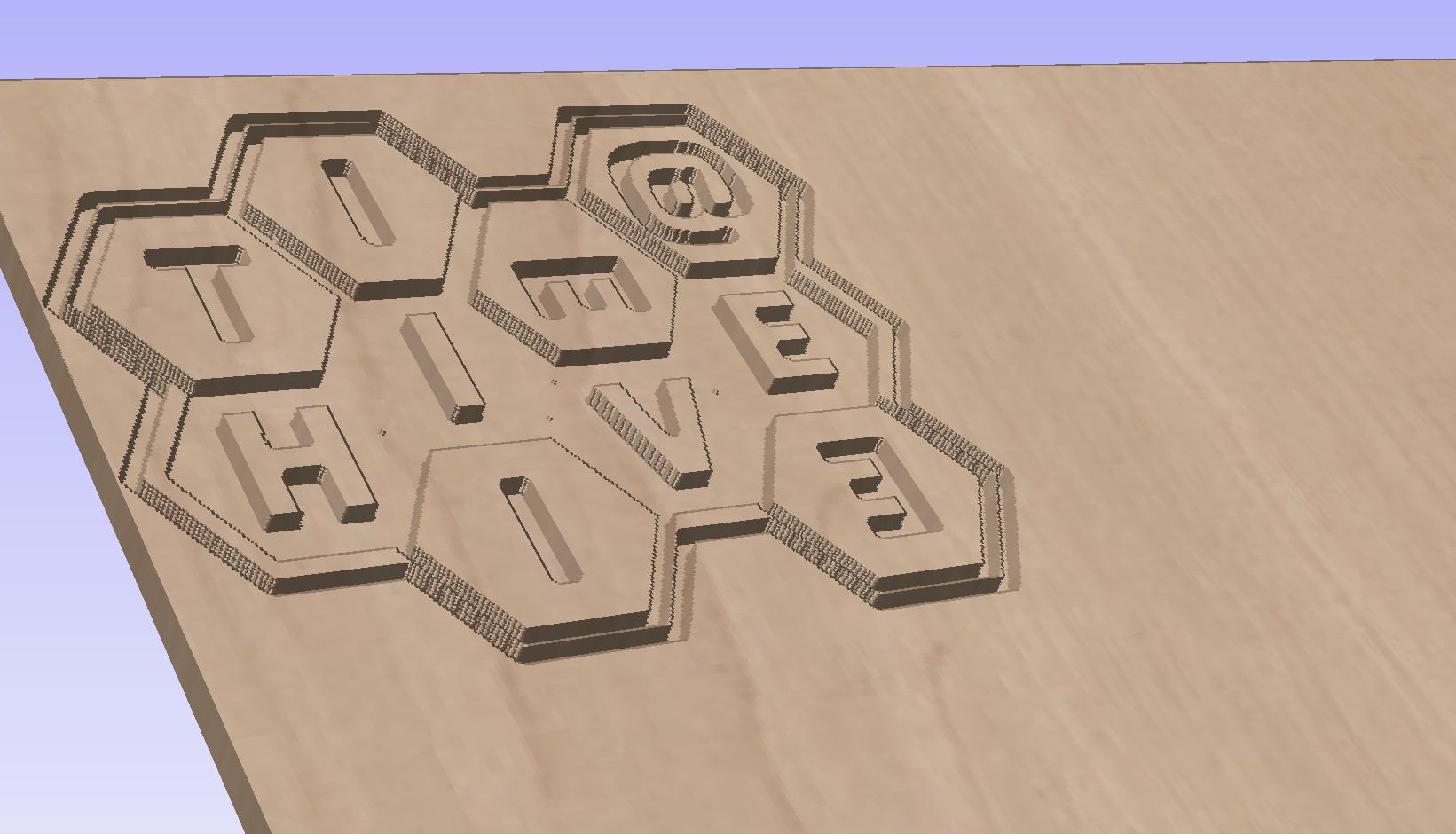 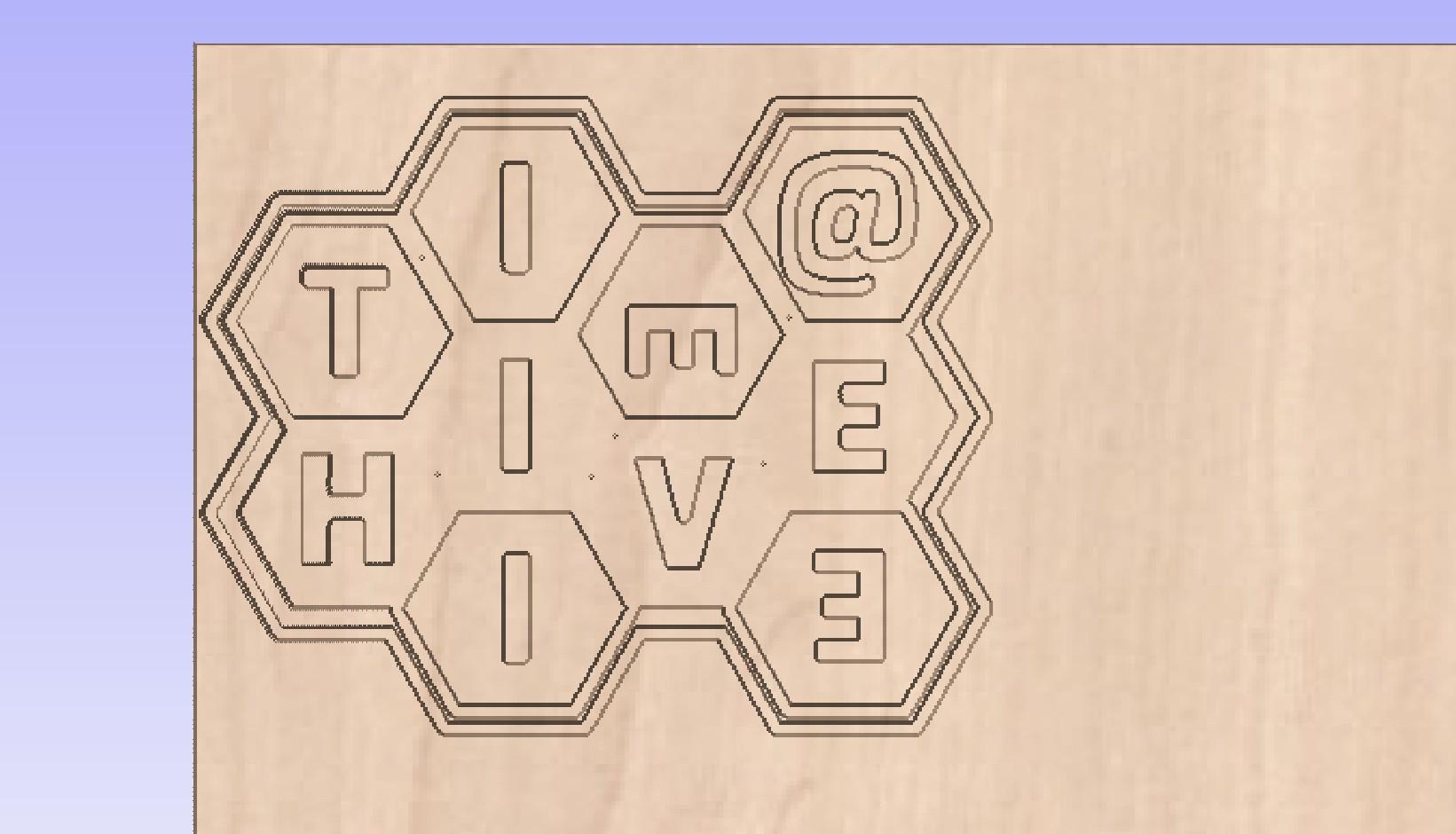 Thanks for sharing! I am trying to wind up some other projects before I dive into that machine. My first project is going to be a pair of boxes for single-point drivers for L and R in the living room.
-D

Lots of thanks to Tim for working on this! I was aware speeds are somewhat off, but I was surprised by the degree when Tim showed me the other night. I usually have cut at 7K-10K RPM, and it’s not too bad in that range…but at other speeds it can be off by 40%.

Take home for now for CNC users: check the RPM reading on the LED screen of the spindle power supply, and compensate your entered speed in Mach3 if needed.

Clay, Thanks I never though about using them for the Collets although that probably would not be a bad idea for the metric ones.

Mike, No problem I’ll keep everyone updated on my progress, also thanks I will try to do better stuff in the future just wanting to get basics first!

Andrew, I saw some of these made online and their drafting skills are much better than mine but I feel I am getting a hang of it.

Dave, anytime I was happy to share also I don’t blame you for waiting I definitely see how you can overwhelm yourself quickly if you start new things before finishing the others down at the hive.

Are you not interchanged?

Dave, here is a new one I just did, I was particularly satisfied by not damaging with spoil board to any relevant degree… with the cnc anyways. I sucked hard core and damaged it more with the chisel than the cnc. 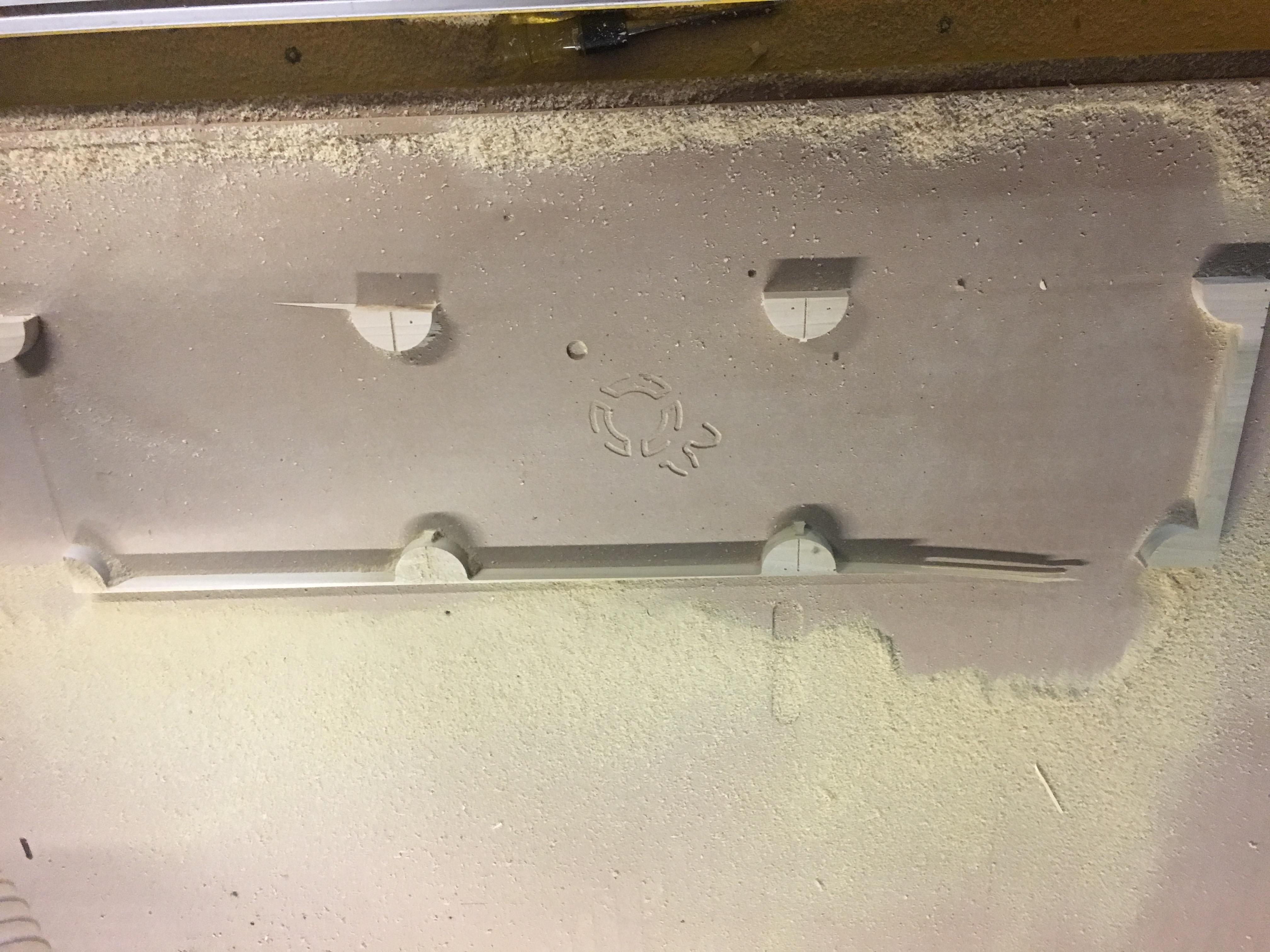 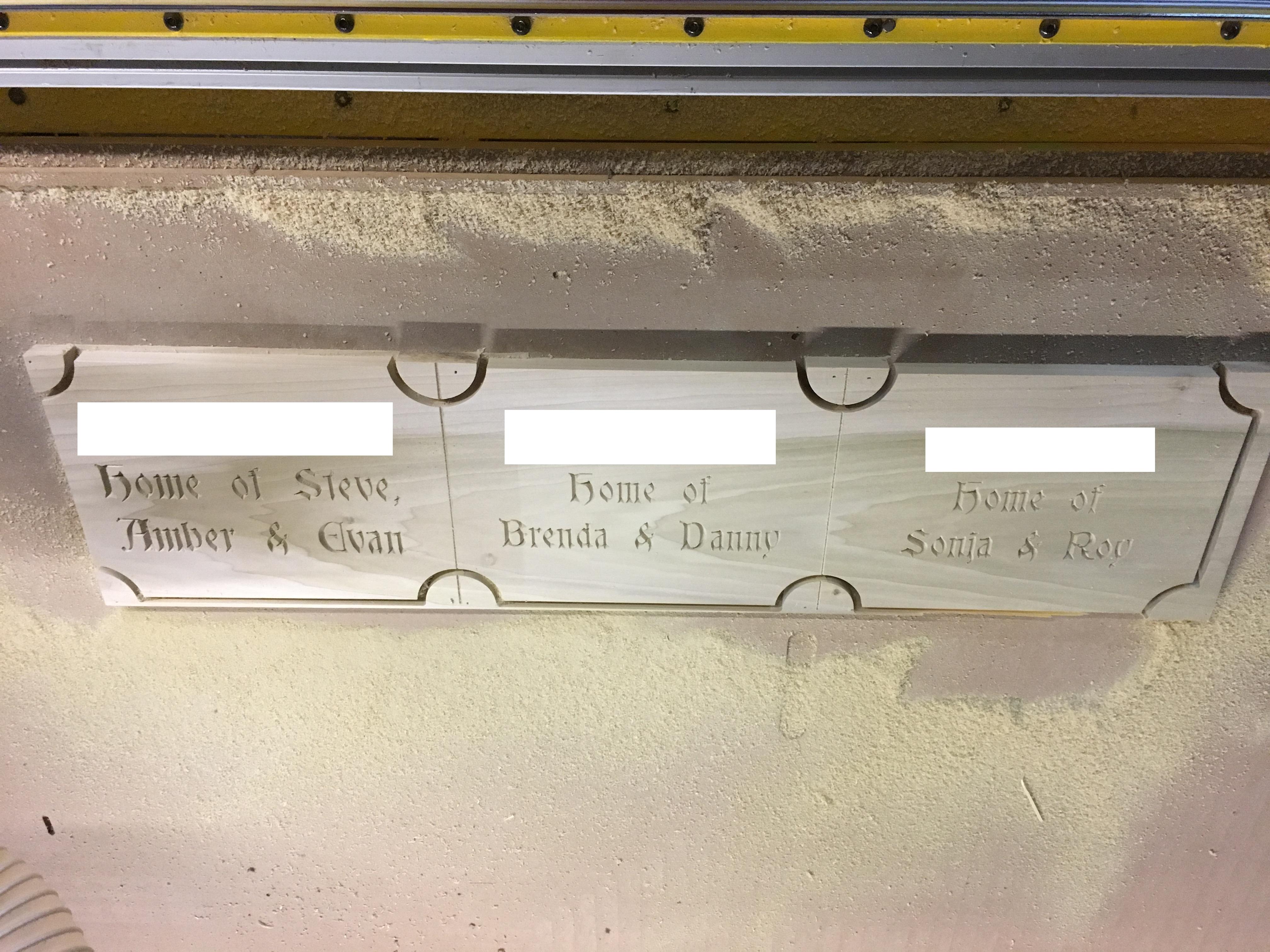 I think you would have had better luck with a thin crow bar. They sell them for removing trim and the like without doing damage to the surrounding wood. Something like this might be a good thing for the CNC warden to add to the sheet as a CNC tool.