Is this your stuff- corner shelves edition

This stuff is in the corner near the server rack and dirty rack. If it is your stuff please let us know by this weekend. I will be condensing and clearing that corner out then.

I think that’s all like free and up for grabs stuff? Correct me if I’m wrong.

I thought so too but I wanted to verify before clearing it out.

Guys really should look at this, we are over hauling this area for DIYbio space.

Also @ Jim (el president’e),
Apparently you have plans for the quad copter window - mind if we place one of the metal shelf from the server area to there?

It would be wonderfully useful to provide pictures and descriptions of said stuff. This will enable commentary from a larger portion of the membership.

Stuff seems to wander around the Hive autonomously, so not everyone will know the contents of a given area.

I’ll try to remember to do this on my next visit to the Hive. If anyone else is down there with a camera in the meantime, please feel encouraged to supply the group with some pictures.

All, while sweeping up today I found various electronic components and batteries in the trash. I don’t know the Hive very well but I was disappointed to see these components in the trash and not in a recycling pile. Some of these blatantly carried markings indicating they cannot be trashed. Unless I’m the only one who would like to see these sort of materials properly disposed of, I will volunteer to take the materials upto Cleanlites south of Wyoming.

I pulled them out of the trash and contacted Cleanlites, they will actually pickup stuff, and I was told that some content has value and some carries a fee. This is definitely something I would like to raise some awareness on! The Commodor 3000(?) Liz had been working on was rescued, and Shadox held onto some little media-pc. I reached out to the Cleanlites guy for asking for tips on sharing basics on tech recycling, would anyone else be interested in a little presentation on the topic?

This directly ties into another topic for the process for removal/cleaning out… for the meantime, may I ask that we please separate out tech/pcbs/batteries, these shouldn’t be traditionally trashed.

In the past, I’ve tried to take as much of the computer-y stuff to the cincinnati computer cooperative in woodlawn/bond hill wherever the fuck they are. The scrap metal places (garden st., Cohen, etc.) also buy a lot of the e-waste. We’ve gone this route previously too, although I’m not sure how ethically sound it is.

I think we should really do the best job we can to recycle as much of the waste we generate as possible. The hive isn’t financially strapped enough to not be able to pay disposal fees to make sure things don’t contribute to the demise of our planet any more than they have to.

I go reasonably close to CCC on a regular basis on the way up to work. I’ve talked with the guys there quite a few times and they know of our existence. Please feel free to let me know whenever stuff needs to be hauled up there and I’ll gladly take care of it within a week or so.

Also if you need truck for larger hauling…

Oh yeah, I’m going to try to come down tomorrow A.M. and grab a lot of the UPS stuff on that shelf. I brought most of it down to the hive so if it’s being gotten rid of, I’ll gladly take it back or arrange for it to be recycled.
-D 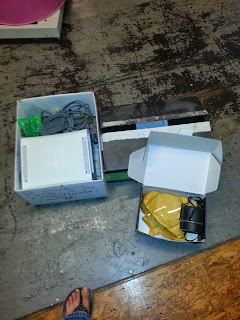 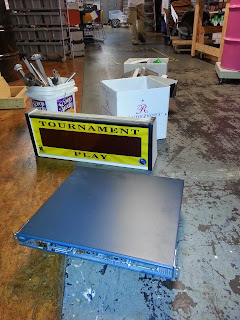 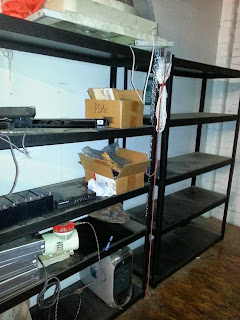 What you see here is:

What you see here is:

Is this stuff just up for grabs at this point?

i know the one xbox that was in the lounge worked like 6mos ago. not sure what happened to it but good luck!

Daniel and whoever else is working on this, please talk to me tonight so I can know what is going on with the DIY Bio stuff and resulting space reorganization.

yurp, so purgatory self is up and running, we’re likely to discuss the use of purgatory at meeting. chances are we’ll adapt what other hacker spaces do which is 1 month and gone, so FYI these pictures are all on purgatory.

Just let me know on the Xbox’s , Jon mentioned he’d preffer they stay but if they are getting pitched I’d like to take stab or least review what’s still usable if cannot cobble one into working condition.