Just wanted to make everybody aware that I will be taking on a new project with New Edgecliff Theatre (http://www.newedgecliff.com/) for the production of the play Equus. They emailed me as a contact for the Hive with a certain problem. They have several horse costumes (~ six) that the actors will be wearing. The director would like the eyes to glow orange but be activated by a switch. They contacted us to see if we could help them out. They would pay for all the supplies needed.

My response was: What? You want us to make giant horse heads glow orange?!? Hell yes! When do I start?

They are a non-profit and I will be working with the Technical Director on more details. They are looking for fairly low costs (darn, I really wanted a project to use those lilypad wearables!) Once I get the details I will create a wiki page and anybody else who wants to make giant glowing horse eyes are welcome to join. I believe we have around 2-3 weeks to complete this tasks.

As an aside, I think we can use this on our federal paperwork as a community charity…glowing horse eyes, hehe, awesome.

This is completely awesome.

Is it considerable to make the eyes SHOOT FIRE LIKE PFWOOOSH?

I was thinking maybe very small flame throwers. Screw glowing eyes,
let's make them COMBUST WITH THE FURY OF HELL!

This should be really easy… Just need to figure out the right combination of LED’s to make orange (I was always horrible at art), wire them up to a battery pack & switch and put some sort of a diffuser over the LED’s (like crumpled up tissue paper).

It depends on how large the eyes are going to be. If they are like ping pong ball sizes we could just get orange ping pong balls, cut them in half, stuff them with tissue paper, wire up something like 2x white LED’s to each eye, hook it up to a switch and viola.

Orange LED’s battery and swtich, easy to make,
and just sand lightly the inside of the clear cap for better defusing. Use a heat gun to shape the caps into a more horse like shape. 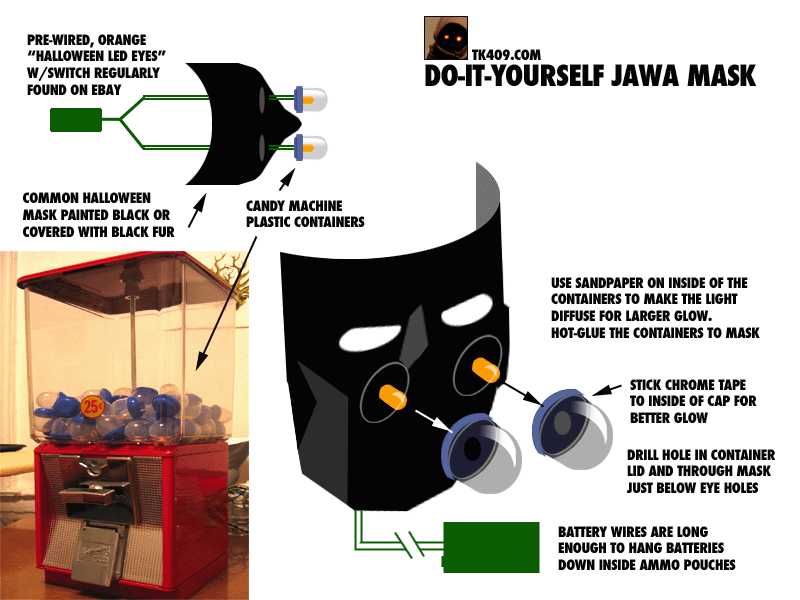 this is bloody awesome. can we make a hive13 family trip to the premier?

also, orange LEDs aren’t tough to find online. we should order soon to be sure we have them in time.

do we know how much candle power we will need for the eyes?

maybe we should order a bunch in case we need to use several?

I have used LEDs in two theatrical applications for Cincinnati Music
Theatre: A magic mirror used in "Beauty and the Beast" and a stripper
costume used in "Gypsy." LED lights are very mono-chromatic and will
not change colors by putting gel (colored plastic that changes the
color of incandescent lights) in front of it. If you put red next to
yellow, from 10 feet, you'll never see it. The Columbia Arts Center
(where NET performs) is small enough you can count of 10 feet, but not
11

Ah - for both applications I used 12v LEDs with built-in resistors.

lol, use these so you can see the horse eyes from space:

I found these yesterday at my local radio shack (and no, I don’t refer to it as “the shack”) http://www.radioshack.com/product/index.jsp?productId=2062570&tab=summary. Are these the lights you are referring to? They only have a 25 degree viewing angle…was that a problem for you or did you use a diffuser?

Did you go with a 12v LED for convenience or is there another reason?

I went with 12v because I bought my LED's from an auto parts store
which designs everything for car voltages.

For power, there is a battery made for "medical devices" which is
about the size of a AA with a 1/4" nipped off that is 12v and widely
available at CVS, Kroger, Walgreens, etc. Battery code A23. Aside:
Cool video of these batteries:
http://www.youtube.com/watch?v=QxS38_u7Mnw

For diffusion, ask the technical director. Lighting designers call
the colored filters for lights "gel" because they used to made from
gelatin. See of their LD has some scrap cuts of Diffusion Gel - Rosco
#119 or similar. If needed, a new sheet of 20"x24" is about $6.00 and
available from Vincent Lighting Systems in Erlanger, KY or Partech
Lighting in Reading, OH.