Just spent about a half hour at the hive looking for the learn to solder supplies. Does anyone know where they are? I found the kitchen chemistry box.

Last year, they came back in chaotic “bursts”. Some irons and misc for this are on the very top shelves of racks by electronics (Last I checked).

I think some supplies ended up in odd places – try the lounge and vicinity. I remember people putting stuff there.

Regarding Batteries: We may not have them. If we don’t, let me know – a member project might have knocked out a bunch of them.

Also, I feel like I saw them at one point in the lounge in the corner between the chair and the couch a while back.

Found some flashing 5mm RGB LED’s but not sure if they have the built in resistor. 50 for $11

Anyone know where we got the supplies?

Yea!
We found a tote with a bunch of boards (about 450) and a bag of LEDs (maybe 400). Still no battery holders, batteries or magnets or irons. So I’m thinking there is another box/tote floating around. 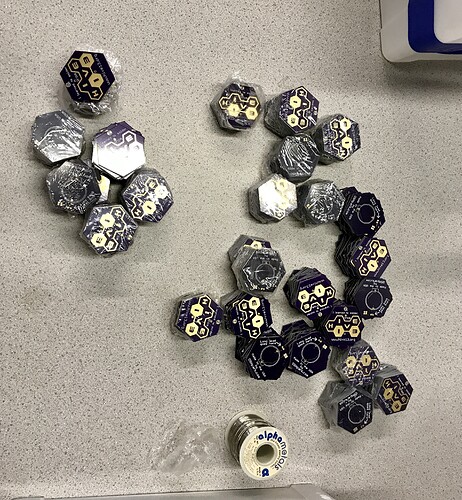 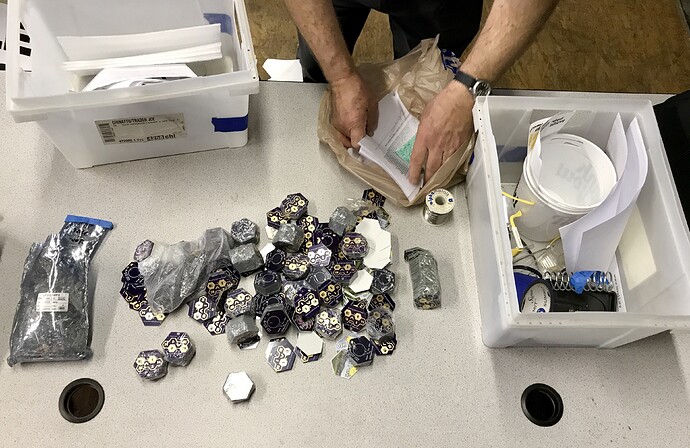 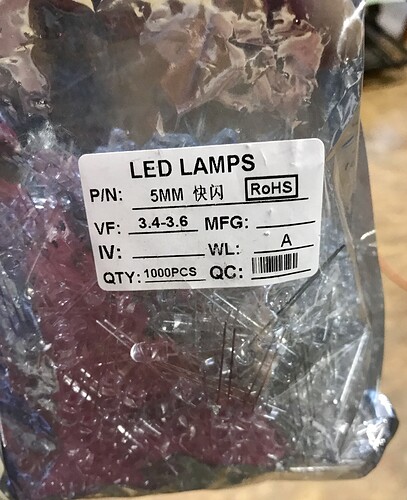 I bought some additional wire stripper/cutters today for this, and general electronics area (it’s time to resupply these).

I’ll measure the boards and select the battery holder tonight.

I inquired at Harbor Freight, and the HF flush cutter wire snips we have (red plastic handles) have the lifetime guarantee. Since all of these are now pretty much unusable, can someone volunteer to exchange them at HF. It’s easy – no receipt needed, you just hand them over, and they give you a brand new one.

In fact, we may want to do this for any other “Pittsburg” hand tools that are screwed up. 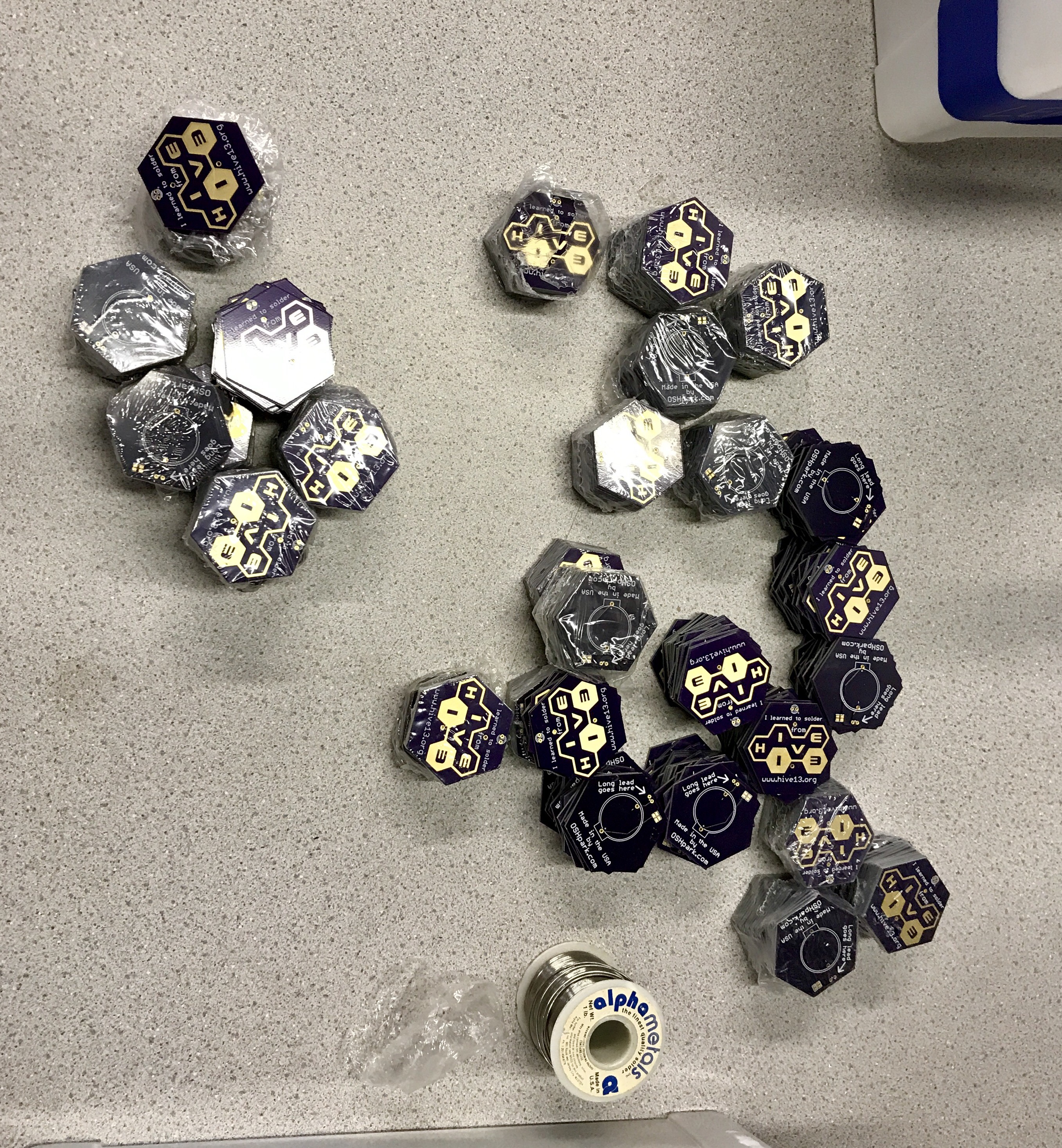 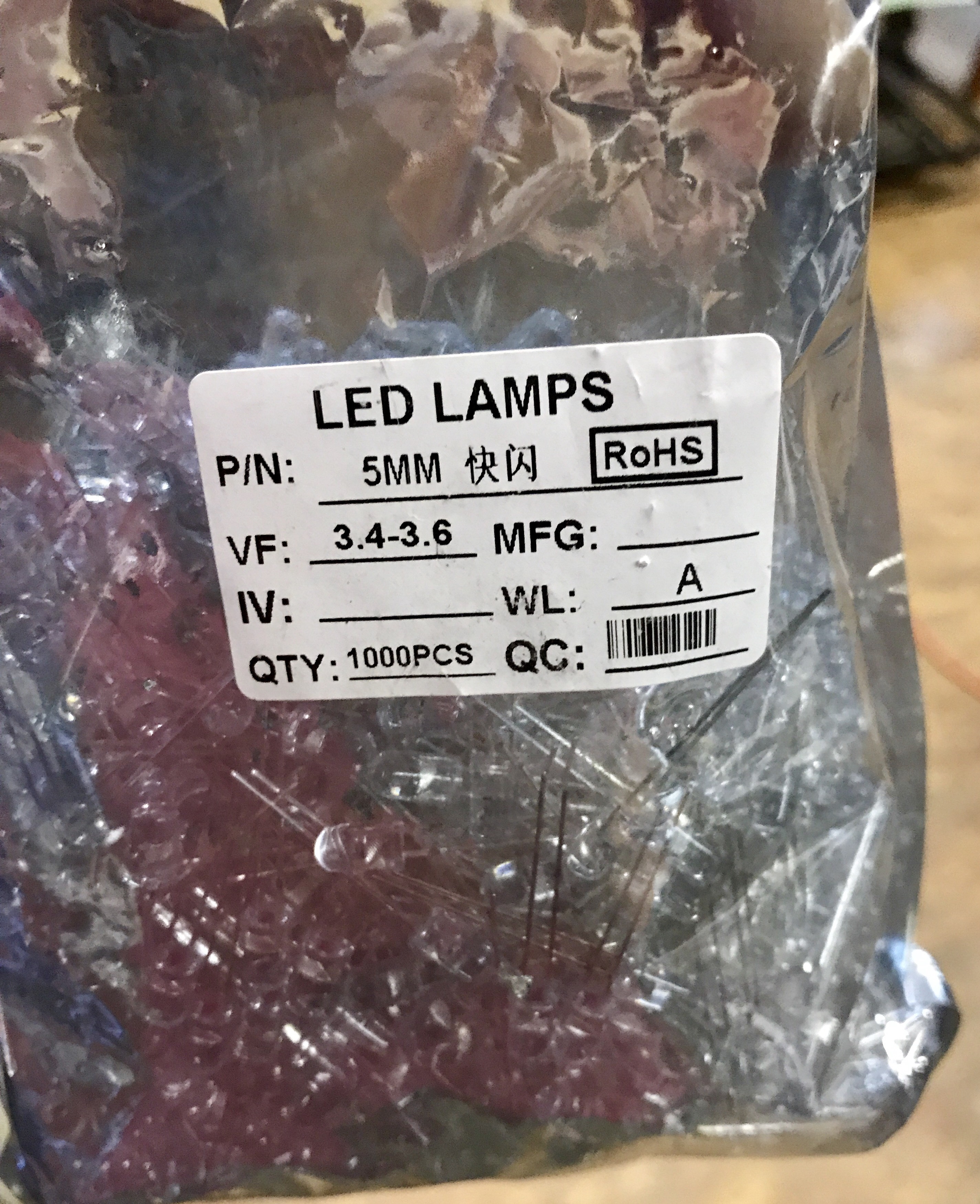 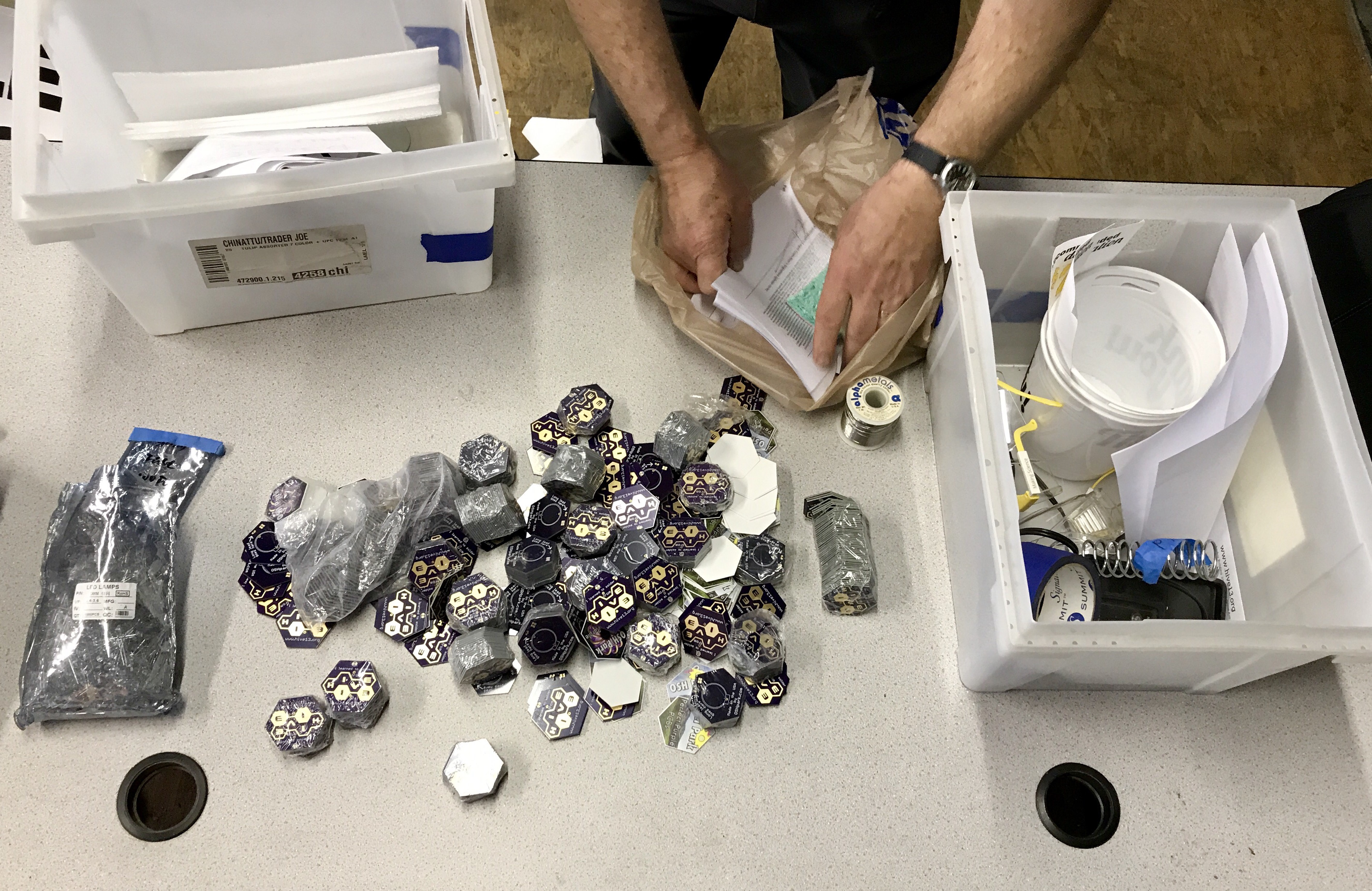 Sorry I missed this thread until now.

Here is the original spreadsheet I was tracking purchases with. It includes urls for where I had gotten everything. Since most of these were ebay listings, they probably are not all valid, but they will show you the types, including that all important ferrous battery brand. “tianqiu”

We found the last of the boxes for the Learn to Solder stuff!
This box had the irons, battery holders, magnets and batteries.
So the current inventory looks like:
~450 boards
~500 LED’s 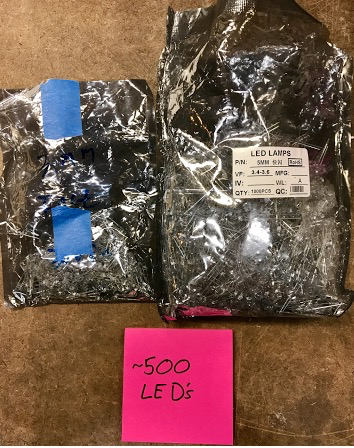 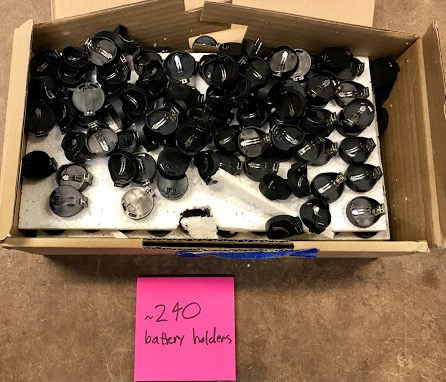 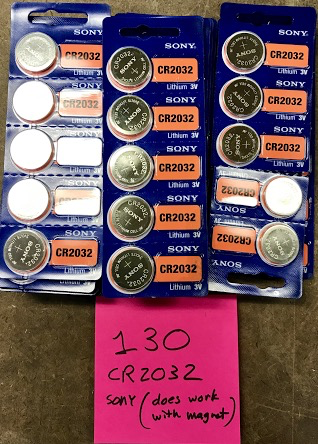 Also a box of CR2032 with little tabs to mount them to a PCB (not our board) probably could do some surgery to “fix” them. 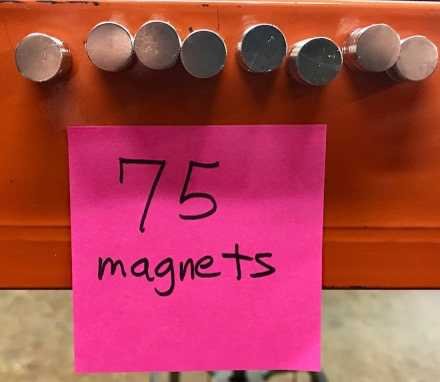 Also the irons are in terrible shape. I would like to look in to getting 5 new ones. 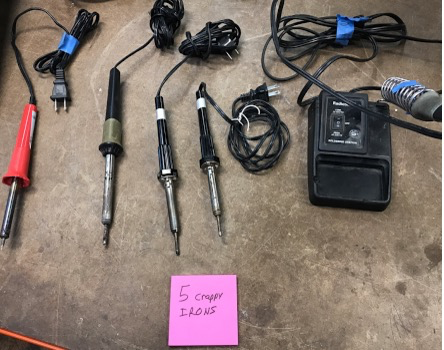 It seems like there are about 450 boards en route from OSHpark so I’m thinking we would like to get about supplies to to 1000 total.
This would mean:
500 more LED’s
750 more battery holders
850 more batteries
925 magnets
5 irons

I’ll dig through the info from Mr. Porter and see what we can get and for how much.

The soldering irons I usually provide (other than my own weller) are pretty cheap. The red one in that picture. Yes, they are too crappy for anyone at all serious about soldering, the handles heat up too much, but paradoxically are better for this than any of the others because the pointy tips are never beaten up (only used a few times a year with supervision so they can’t be abused) and the one temperature they get to seems to be appropriate for this task.

Seven bucks each. https://www.amazon.com/gp/product/B0006NNRW4 Get 4 more and throw the others away so no one will be tempted to try to use them again.

I’ll also donate the other 3 or 4 I have (I’m no longer using them to teach boy scouts), but I’m not sure when I will be that way again and am going out of town soon. When is the next event?

Thanks for your help.
I’ll go ahead and order 5 of the cheapo irons and have a party trashing those abused ones.

I’m still digging into the other parts. Most of your links are expired so I’m kind of starting over. I did find some ebay vendors that have the parts. I’m tempted to use Amazon because of the shipping but the price per part tends to be higher.

I’ll do some more digging tonight and let you know what I find.

I went through the box you put together, Brad. None of the parts is exotic. Pretty sure we can bargain basement it all. We just need to make sure the battery holder fits (lead spacing). Otherwise, many variations will work.

I found some of the other stuff on Amazon but I wanted to talk to some electronic guru (do you know any?) that could get some quantities ordered from the interwebs.

With the exception of the batteries, I almost always had to find new sources of everything each time. When ordering on ebay, I often ordered from multiple places in case one didn’t deliver.

I always started with places like mouser or digikey, but the prices were never good, even in large quantities, which I found surprising.

And those battery holders look like they are right. I have also sourced them from different places, and have not observed any variations.