I upgraded to heated bed and Al build plate on my Printrbot at home. They recommend a no-name chinese power supply to provide the 12V 20A peak that the heat bed, steppers, hotend (I have an E3Dv6) consume.

I had one around, so I gave it a try. I expected it to be not-so-great. It fails every print if I heat the bed.

Any recommendations for a reliable industrial (high duty), not PC, (preferably UR or UL) power supply to put out 12V at 20A? Bed draws 12A or so, but inrush, longer periods of high duty, and other factors make an ATX supply freak out. I do want bang for buck. Was thinking a UR Meanwell brand would do.

Any recommendations from the sages of switching supplies? Since my specialty is extremely low noise analog applications (100+ dB amplification of 2mV or even uV signals), I use linear supplies. I don’t have a switcher like this on hand, and I don’t use them in my work - so I don’t know the nuances.

Can I have some help?

You mentioned “not PC” but that is exacly what I did for my Printrbot at home. I had an old power supply from my gaming days and it is working fine.

You’re not going to find anything remotely bang-for-buck ish aside from an old server or gaming PC power supply. They’re mass manufactured, cheap commodities. Throw a couple of big caps on the output to help with inrush.
-D

I simply don’t use these for anything other than computers, so what am I missing? I don’t think I need to put a scope on it and check inrush if it is rated at 32 amps…

Am I missing some special mojo that needs to be done other than connect green to black to turn it on?

Dave, I get it. I am just tired of throwing out cheap power supplies.

Lorin,
A lot of times you can’t parallel up the 12V circuits in an ATX power supply that effectively. I think it has something to do with the SMPS topology that most use but I know you have to majorly derate the output of both channels in parallel vs. the individual rating for each channel. I learned this trying to run many ATX power supplies in parallel to power a ridiculous car amp and subs for use inside the house. It took a lot more than 2000W of output to reliably drive 2000W of amplifier at high output levels.
-D

Thanks. I’ll try the 17A rail alone and see how it goes. It should take no more than 15A tops. It’s a small, simple load.

It may be getting weird about 2 rails being || . I’m way to used to my linear Power One, Lambda, and Condor Supplies. I have yet to replace one, and a couple are from 1980s…

If it pisses me off too much, I’m going to eject it directly into e-waste bin. There are more clever things I can do than d**k with a PC PSU…

It’s also worth looking for an ATX supply with a single 12V rail. They’re popular with gamers due to the power requirements of high-end video cards.

I like them for high load LED strip projects, so I check the UC surplus auction when I roll through. Let me know if you want to try one of the ones I have on hand. At $5 a piece I’m not terribly worried about smoking one. 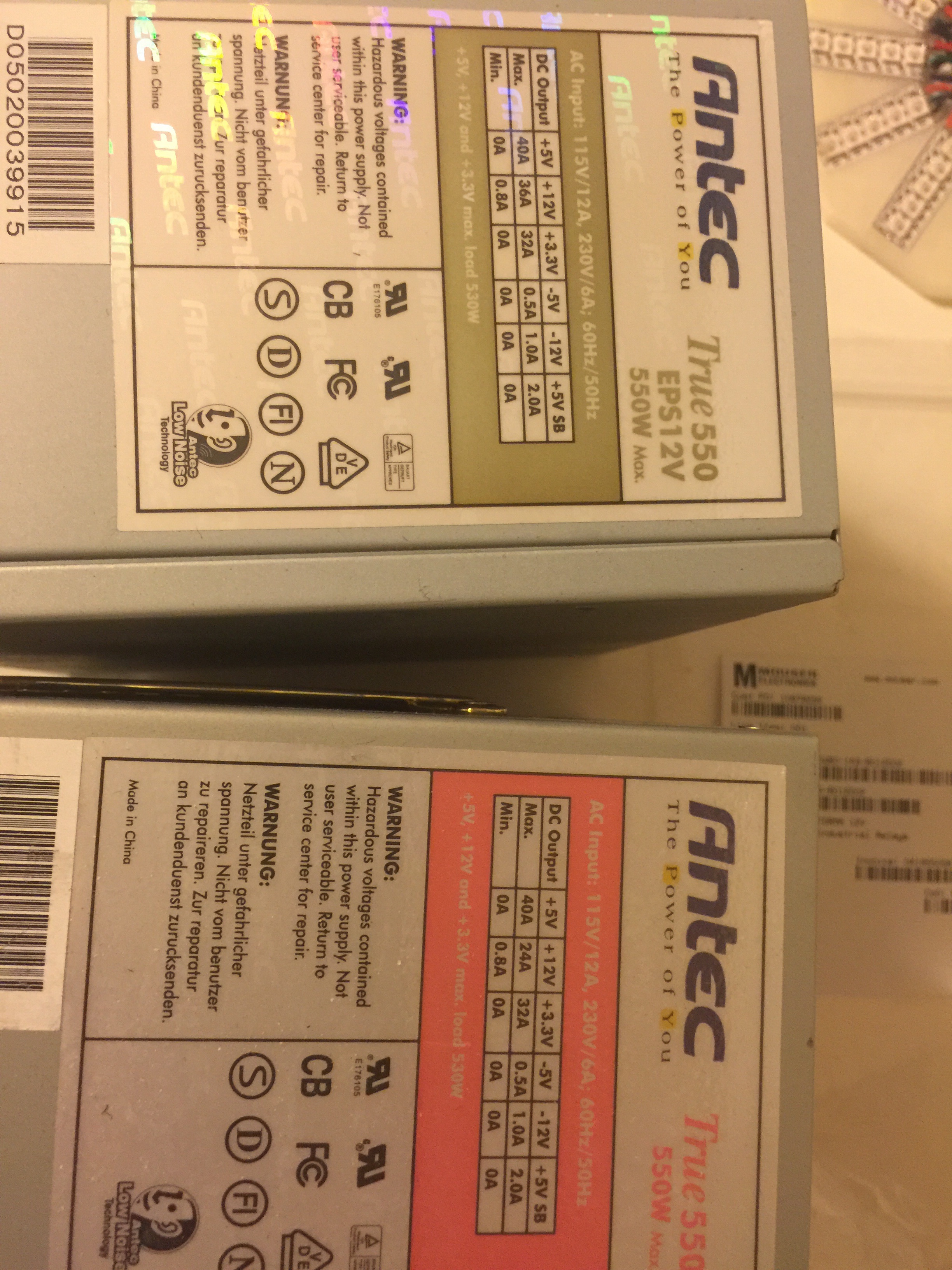 Those look better than the junk I have. Maybe I should go to surplus since it costs me $0. If they don’t have a PC PSU, they’ll have some lab equipment I can pull a nice PSU out of. I do enjoy the dumpster diving benefits given to faculty…

Lorin, throw a few big caps on there to deal with inrush and you should be golden with a suppply that claims 1.5-2x what you NEED on your 12V. I think I had to derate 2x for the sub amp but that’s being kind of mean to a ATX PSU.
-D

I deemed that ATX power supply a POS. I’m sure a nicer, newer one would have worked fine.

Doesn’t have a zillion unused wires hanging off of it. I’ve used meanwell before, it will outlive the printer and be useful for something else. I’ll probably have it doing double duty in my office running some other stuff.

You’re powering an audio subwoofer with a switcher? Jim Williams is rolling in his grave. Audio can be weird. It’s one area where linear is more efficient and reliable. As long as it sounds good and doesn’t catch on fire, It’s fine by me.

That house burned to the ground 13 years ago… It had the desired effect of shaking the entire building while it was active, however. I don’t think audio quality was as much the goal as a gross display of power/vibration. You could feel it on the sidewalk outside.