The light fixture nearest the CNC machine took a ladder hit during the dust collection work today. One of the plastic end posts is broken and will not firmly hold a tube. The tube itself is fine, and has been stored on the roof of the lounge for safekeeping.

So, a question for the HiveMind. If repairing said plastic bit isn’t a viable option, should we simply replace with a like T12 fixture, or should we consider something else? Possibly something brighter, more rugged, and mounted a tish higher like the brighter fixture in the welding room?

Lighting isn’t really my thing, so it seemed worthwhile to see if the group had useful ideas.

Clearly that idiot had been trying to accomplish something at the Hive. WTF?!?!?! Can we have the guilty party drug out into the street, whipped, drawn and quartered, and fed to ravenous cats?

Anyway, I think we need a jacob’s ladder. Anything else isn’t enough light!

I consider this an official proposal, I vote yes!

This is a two parter:

Let’s move out of the dark ages. (Ha)

These things run $50 each. We could get two and light the whole area.

As a maker space, we could also enhance it with color and pattern changes that could randomly startle the CNC operator awake,
during long milling runs! ; )

While I ordinarily would agree on the upgrade to LED, in this case we’re not paying for the electricity, the bulbs last almost as long, and the fixtures are $12 at the Horrible Destination.

You could just buy them and use the warden sheet to get reimbursed.

Yeah, I think that’s going to be the plan. The only thing really holding me back is I’m not sure which bulbs we have, or how long the fixture is.

I think there is a set of bulbs in the bathroom (shorter length).

If it’s just the connector that holds the bulb itself that broke, it’s a fairly standardized part called a ‘tombstone’ and costs <$5 at any local hardware store. Replacing it should be even less work than replacing the entire fixture.

For best efficiency you totally remove the ballast and wire the tombstones at one end (new ones included) straight to 120V.

Note: for either of the above solutions, you may think that just turning off the light switch is safe enough, but the yutz that wired the fixture might have put the switch on the neutral line instead of the hot, which makes it basically impossible to remove / install a bulb without shorting it to the frame, much less rewire the fixture. So just flip the breaker no matter what you are doing.

Are the fixtures using T12 bulbs, or T8? I may have close to an entire case of them I’d rather donate and continue my LED conversion project.

I suggest going with the fixtures that are more common and easy to get bulbs for.
A Jacob’s Ladder sounds just lovely with all of that sawdust in the air.

I have an unused 48" fluorescent ceiling fixture is that’s of any interest.

The fixture in question is 8’, so that would be preferable.

Perfect, found one at Home Depot, I’ll pick one up tomorrow, and get it installed Tuesday.

And on the second day, his noodliness reached out his blessed pasta appendage and said “Let there be light” and behold there was! 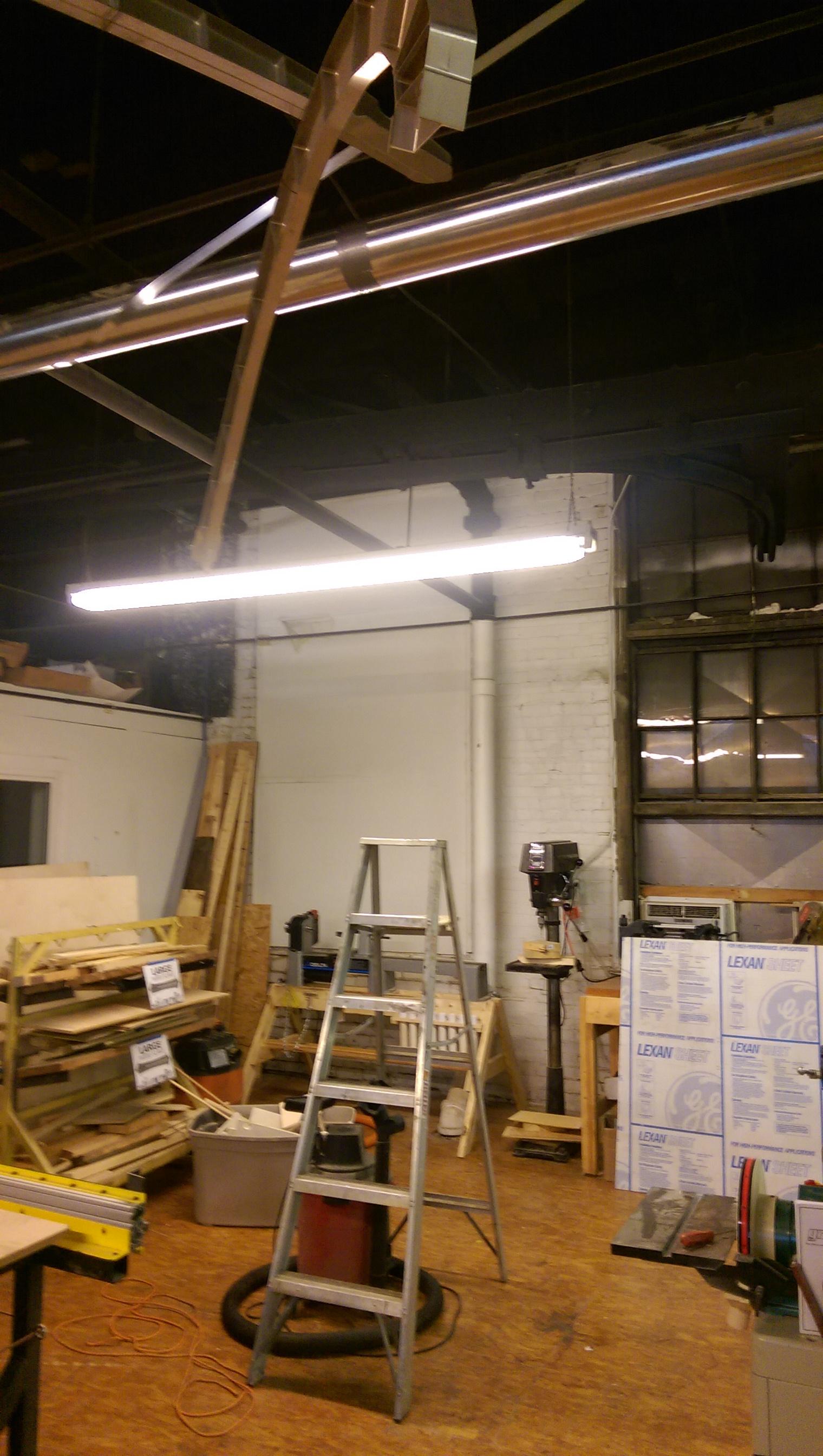