The DT832 was giving some strange resistance numbers… Voltage etc still seemed to work correctly. I found the craftsman lying around without batteries added some batteries and was able to confirm the resistance with this meter. So you may want to check your resistance if you are/have been using the DT832 lately. 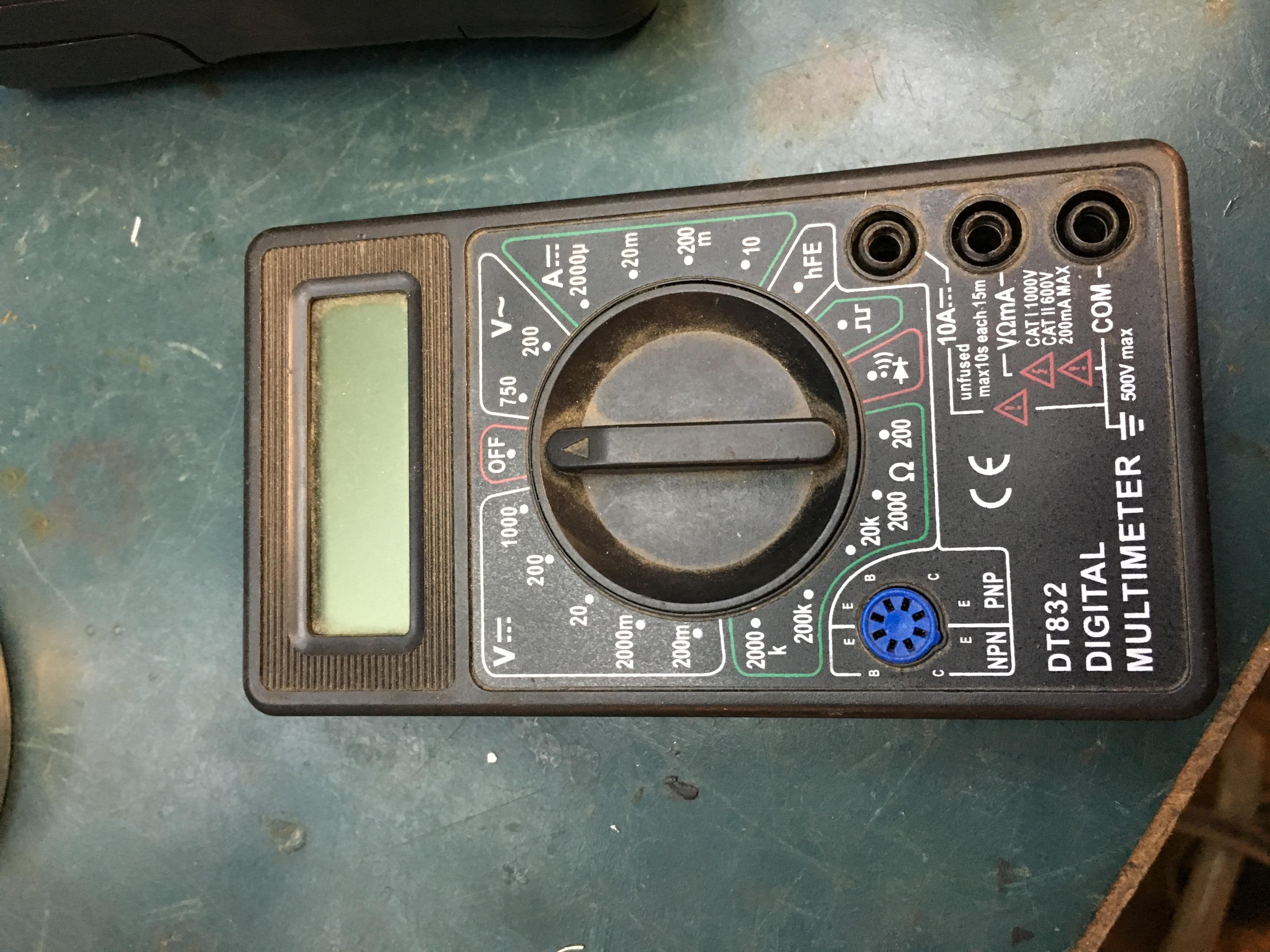 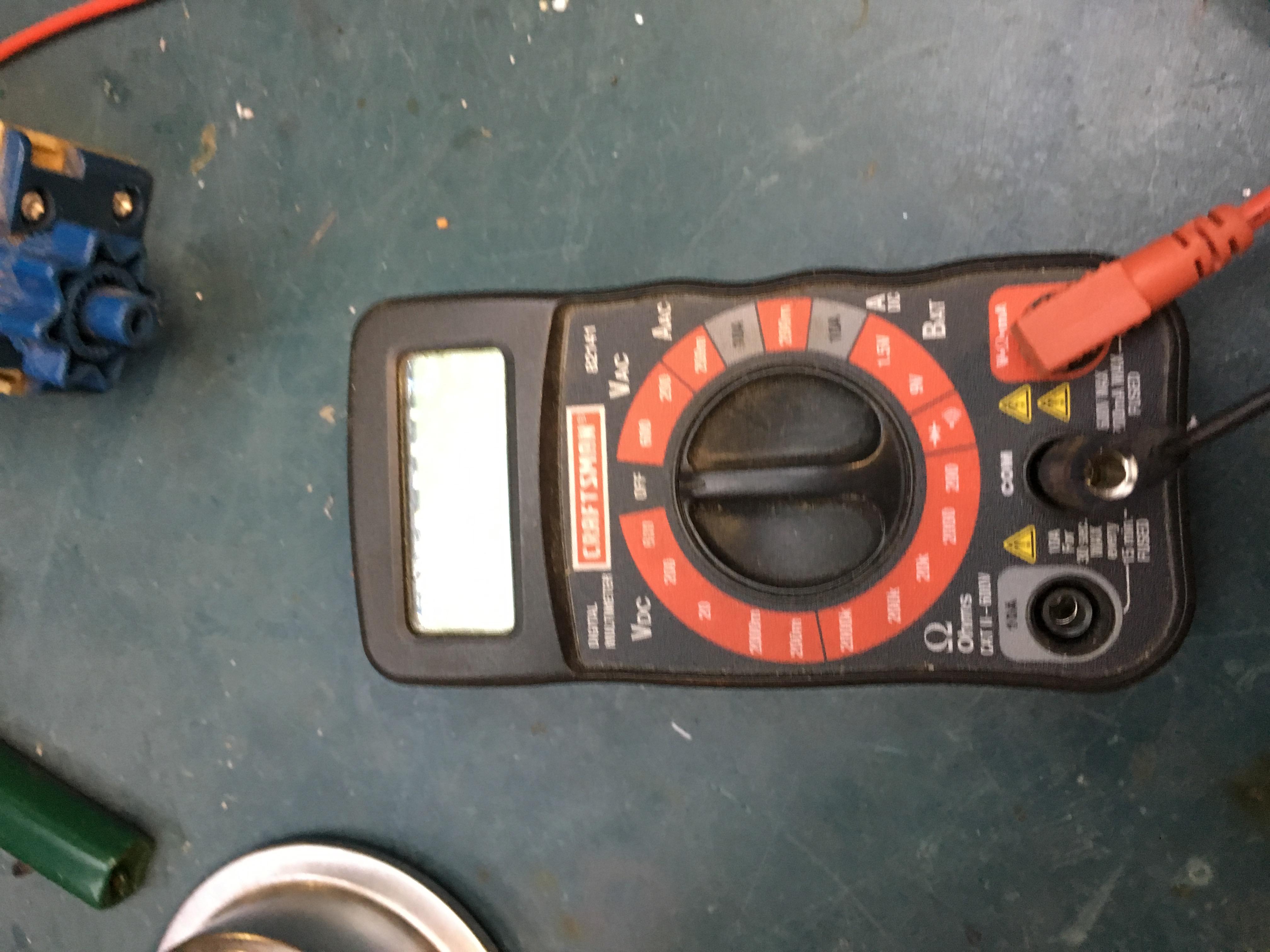 The 9 V battery was dead in that one. We need to order some 9 V for the hive. I’ll put it on the warden spreadsheet this afternoon.

I was getting accurate resistance in the craftsman.

Low batteries cause strange readings on cheap meters. You can always check it against the HP bench meter. That one is correct.

Also, since we seem to lose DMM’s quickly, I’m not anxious to buy more portable meters or batteries. I am very open to getting an economical user friendly bench DMM for the electronics bench which doesn’t have the HP.

Searching on amazon I found this bench DMM for around $110

Let’s find something we like and buy it. I HATE using crappy tools. I bought a Fluke DMM for personal use and have never regretted it. Those Harbor Fright DMM’s scare me.

I’m sure there are some fancy bench DMM’s on EBay, if you want to go that route.

It very well could just be low batteries on the DT832, I just wanted to make sure anyone whom was concerned, knew about the issue. I happened to have an extra battery so I put it in the meter which had no battery.

I bring in my own DMM - BK Precision.

Tenma is hit and miss. I usually recommend against them for more than hobby usage. They are a house brand for Newark (and, hence, MCM). Usually they’re okay, but every piece is simply a rebrand from a cheap Chinese product. No consistency.

My ampprobe handheld has been pretty awesome. autoranging, decent warranty (5yr?) but at $100+change/pop it’s a lot to leave around where it will grow legs and walk. Not quite fluke money but a lot better value IMHO. I also have a splattering of various cheap (<$20) handheld multimeters and some are def much better than others.
-D

So I guess I should ask, Do things at the hive that can't be tied or weighed down disappear that often?

I think it is more “Lorin style” walk off (i.e. left random places they don’t belong) versus the theft variety.

In any hacker space, there are a few items that must be considered consumables over the course of a year or two. Essentially cheap, extremely common, mundane hand tools.

Even if the harbor freight or “free with your purchase” meters were still around, they would likely be dead. With serious use, a <$10 meter will be outlasted by the next battery you put in it.

Yes, amprobe is a good deal. I think Fluke is great, but I’m not often in need of spending $200 more for a meter intended for brutal field work. I like using a reasonably rugged and equally accurate BK.

I think small bench meter would do in addition to the HP monster. They’re small enough to be used throughout the space and last well.

Do we want to get a middle of road multimeter, like an extech?

My real answer would be HP 3478A from ebay for about $100. Fine meter. There are so many of them used now they are cheap – nearly indestructible.

I’ve heard VERY good things about this Chinese only Fluke 12E. You essentially need to ebay it however, since Fluke won’t allow it to be sold at retail in the states.

As an aside AvE is probably one of the best channels on youtube if you’re into tools reviews, machining, and general dicking around in the shop.

Especially if it is chained to the bench.

I’ll keep an eye on ebay and try to get a good deal.

4 good leads are needed in addition to adapters (Pomona is what I usually use). These 4 wire meters are ideal, as they can eliminate the LRC of the cables when measuring small resistance. Makes a difference if you are biasing a high power FET or doing any kind of RF work.