Is anyone else interested in having a graphics tablet/drawing tablet available at Hive13?

I've used ones in the past both with and without built-in displays, and if you haven't used one with a built in display, they are amazing. It makes it feel like drawing on paper.

I have some CNC and Laser art projects coming up that I'd love to use one for. While historically these have been insanely expensive, the prices have dropped a lot. While the flagship WACOM tablets are still many thousands of dollars, there are quality consumer level options now for affordable prices.

Some quick searching tells me that this would be a good budget option at $360: 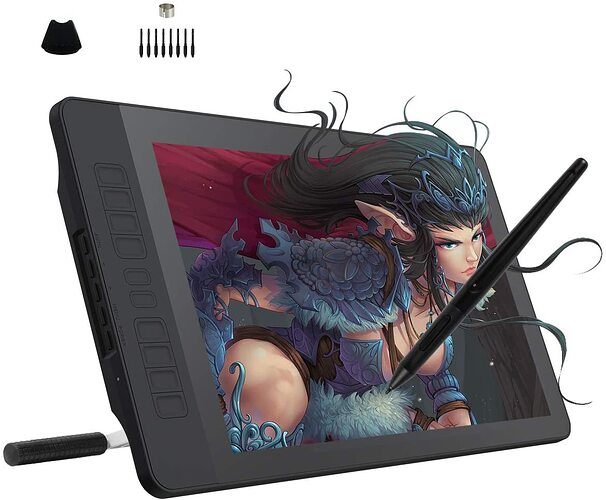 I am all for this! I been wanting to tinker with one for 3d modelling anyways.

I’m also not against getting a wacom either. Higher cost for sure but well worth the money.

We did have one a while ago but I don’t know where it went.
Lets do some research and get a vote together.

Brad, looking on the Wiki I only saw mention of where Dave B. brought in his tablet, but it was just the tablet without the display. was there a pen display type tablet at one point?

Daniel, My initial thought was to go with a Wacom, as I have had great experience with them in the past, and they are known for this type product, but looking around at reviews is making me think there is little advantage to one of them over the GAOMON I posted… There are only three features that woudl really push us to Wacom:

Since it would be a price jump from $360 to $1700, I’m inclined to say stick with the cheap entry level for now. if it sees lots of use, we could always get a nicer one down the road and it wouldn’t hurt to have two at that point.

It looks like that Wacom Cintiq 22HD can be had used or refurbished for around $1300… that is tempting, but still almost $1k more than the cheaper brands and smaller sizes

So the question is, how much is a large screen and the higher quality worth it?
I am always a fan of if you have the money get the better one, normally it’s worth it.

In the long run I’d likely vote yes to either one, but I’d prefer to have the wacom.

One of my artist friends just pointed out something to me: Wacom is the only tablet maker that keeps updating their drivers years after release. She says she has a 2012 Wacom that is still getting updated drivers that fix bugs that show up with each release of major software/OS.

I wanted to chime in on this because I’ve worked with many of the systems in the past. Basically you have two kinds, the ones with the display and the ones without. To have a display cost a lot more money. I would lean towards getting one without a display you can use the CAD computer for the work.
You basically pay for area. I have a small Wacom bamboo which is about 4“ x 6“ and I think it was around $100.
As you get larger the price goes up.
The Intous line is their “pro” version.
There are some cheap knock off’s out there but I would shy away from those as the driver support is terrible.

I have one of the non-display wacoms myself. I know some people can make great use of them, but I have always found them kinda miserable to use, particularly having had access to a display tablet in the past.

I had intended this thread to be specifically about a display tablet like the WACOM CINTIQ or Huion KAMVAS lines.

They are very nice.

I am for this, but based off of other threads if voting 1 item will turn down another item (based off comments in the resin printer thread) I will have to say no for something I feel is a better piece of equipment.

Definitely thinking of sticking with the lower price range if this goes up for vote. Start with something small to at least have the capability in the hive then see if/how it gets used. The one I first linked ($330 15.6" GAOMON) seems to be the best starting point to see if people would like using one of these at Hive13.

Does anyone else have any thoughts on if this would be a worthwhile thing for Hive13 to buy?

I don’t know if you have ever used the program ‘Artrage’ with a graphics tablet but it is a really cool experience.

I used to build computer images for schools that gave each student a Windows tablet PC so I have worked a LOT with computers that you can write and draw on the screen with a stylus. Sadly none of the computers had pressure sensitivity and certainly not tilt capability. I’ve always wanted to work with Artrage with a pressure and tilt stylus. I didn’t realize that some of the options had become so affordable.

I’ve used a ‘regularl’ tablet in the past*
… And in my experience, the Wacoms were overpriced for what you got. Oh, true, the pen doesn’t need batteries, but guess what? My second tablet used a AAA battery in the pen and it lasted FOREVER (the previous tablet had button batteries and also lasted a long time) I bought 12x12 tablets back then, which were fairly spendy at the time (to me)

At half the price of a Wacom for the same size, and slightly better on tablet resolution (the tablets dithered for a higher interpreted rez) I’ll buy a cheap battery every 6 months to a year.(or more). Part of what Wacom sold you back then was a bunch of crippleware they included with the tablet. Oh and Wacoms worked on Macs, which were heavier on graphic programs (some of which were Mac only)… but pretty much anything can be gotten for a PC now.

So these fancier tablets are just drawing tablets? They don’t come with a CAD puck like the old ones? Are they usable for CAD?

I have to say that I’m not thrilled with some of the prices quoted earlier, And I wonder where this tablet will live? Probably on the workstation, right?

Greg found the non-display-embedded tablet yesterday and I hooked it up to the CAD workstation so it’s there for people to use.

I’m probably going to order the $330 15.6" GAOMON myself since interest here seem limited/non-existent. if any other members would be willing to split the cost with me, I’ll make it a donation to be Hive-Owned.