Well... It was noticed that the gigabot was printing oddly, and despite what appeared to be a successful abs build the issue came from the nozzle being bent.

Looks like some of our thermal trials to figure out what was happening may have... Softened the peek plastic, that combined with hitting the head on the build plate also bent it out of whack.

Maybe it was just Softened at the abs printing temp, who knows?

So for now, please don't use the gigabot until the nozzle is replaced.

The bright side is that a volcano nozzle is on its way. We'll have. 0.6 0.8 1.0 and 1.2mm nozzles to play with. While it's a decrease in fine features, it should mean we can print large parts much faster.

Sweeeet, I really want to see the gigabot printing with that 1.2mm nozzle.

It’s pretty silly. Here’s a test piece from the 1mm nozzle currently attached to my Printrbot. Rectilinear infill has amusing problems at this layer height.

For refrence, what size nozzle is on the polar 3ds?

The Polar3Ds are equipped with a fairly standard for their size .04mm nozzle. This strikes a good balance between precision and extrusion speed. The Gigabent nozzle is .05mm, and you’re probably already familiar with the difference. Gigabot parts are always a little more blobby and stringy than their polar counterparts.

This difference will soon become extreme. With the larger nozzles and layer heights, I’m finding it difficult to print parts with fine detail or those smaller than roughly 5cm square. There simply isn’t enough cooling time between layers to efficiently print small parts at these extrusion widths. You’d need to send the print head off to play stepper music while the thick strand of filament cools enough to accept a second layer without deforming.

So unless we want to frequently change nozzles and recalibrate the printers (we don’t) we’ll wind up with a seemingly reasonable bifurcation of print jobs. The Gigabot will be relegated to large low precision parts (structural components, project enclosures, art and costume pieces) and the Polar3Ds along with any future bench top printers will handle cases where more detail is required.

See below for detailed specs on our current stable of printers:

I think your numbers may be an order of magnitude off Ryan.

The polar 3d has a 0.4mm nozzle and the gigabot currently has a 0.5mm nozzle.

I give you… the Derek Zoolander printer for kids who can’t math good?

Jim and I made significant progress on the Gigabot Saturday afternoon. We’ve mounted the new hot end with 1.2mm nozzle, rebuilt the firmware, and run several ABS test prints with varying degrees of success. I’ve also made a Raspberry Pi based printer control system available at http://gigabot/ which should greatly simplify future use of the printer.

We’re still dialing in a few settings. Bed height is not perfectly set. The print nozzle is slightly canted relative to the print bed. The new hot end is also somewhat fragile, and will not withstand catching on a raised part or being dragged across the print bed. Accordingly, please avoid using the Gigabot until calibration is complete and we explicitly state that the machine is fully operational.

Unless you’re Bill. In which case, print away.

The new hot end with 1.2mm nozzle was mounted, and multiple test parts have been printed in

Awesome work on this, thanks guys!!

Just so it doesn’t catch anyone by surprise, I wanted to mention that I have temporarily installed the Gigabot’s 0.6mm nozzle for a weekend project.

James and I encountered some difficulty yesterday while attempting to print belt clamps with the current selection of giganostrils. We’ve always known that the larger bores would produce less detailed prints, but no smaller Volcano nozzles were initially available.

Since the 0.4mm parts are now shipping, and the default Volcano nozzles are outright ludicrous on my personal printer, it seemed like a good idea to pick up a 0.4mm for each machine.

The new bed level sensor has been mounted to the Gigabot. 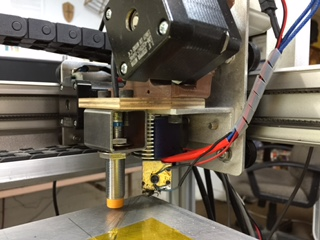 Don’t begin the celebrations yet, though. The Gigabot’s Azteeg control board cannot directly drive the new inductive sensor, so there’s a little more work to be done before the Z-axis limit switch can be replaced. If anyone wants to discuss potential solutions with me at Tuesday’s meeting, I would appreciate the assistance.

At the moment there are no changes in Gigabot operation other than a small reduction in usable build area. Still, some progress is better than none. Onward and downward!

I’m curious what you mean by directly drive, is it a matter of sourcing power from somewhere else?

Incremental progress is worth celebrating when it comes to gigabot, I think.

The sensor expects between 6V and 36V, and the Azteeg limit switch connectors run at 5V. Small oversight on my part. I hadn’t realized that the printrboard I’m used to has a high-voltage output selection jumper for this purpose.

I’ve tested the sensor independently with a 12V power supply which seems to work fine. We can source 12V from the Gigabot’s power supply, but I didn’t have a plan ready for connecting the sensor output pin to the Azteeg. Rather than fumbling about and risking damage to another Azteeg, I thought I’d call a halt for the evening and go peruse the schematic.

Do you have a link to the sensor you bought? I’d like to take a look at the datasheet to see what kind of output it has.

This isn’t a super hard problem. I’m sure myself or Lorin would already have all the parts necessary.

If it’s more or less a threshold/on/off kind of signal, you can use a series resistor (to limit maximum current) and a zener diode (few tenths of a volt lower rating than the maximum voltage you want to transmit.)

If the sensor is outputting a voltage signal that changes either proportionally or non-linearly with respect to distance, you could:
-Use a voltage divider resistor network to linearly scale its output into the acceptable range for the Azteeg
-Use an op-amp as a voltage divided to scale its output into the acceptable range while driving the signal stronger and minimizing impedance issues
-Use an op-amp with some very creative circuitry on the feedback portion to attempt to non-linearly scale a non-linear signal in order to have a more linear output.