So with a LOT of help from Ryan I have been able to complete phase two of the dust collection project. This means that the branch next to the center column has been completed, and we now have dust collection for Router, Band Saw, Spindle Sander, and a Vacuum attachment. We have spent ~$350, with a projection of around $150 for the remaining phase 3 (lathe/Drill Press) and 4 (Fine Dust out the Window) 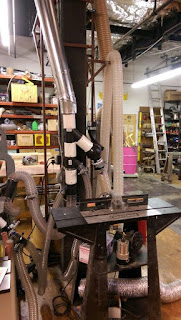 Attachments for the Spindle Sander: 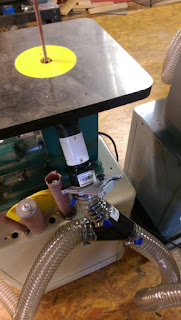 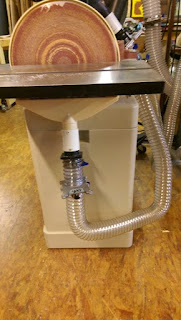 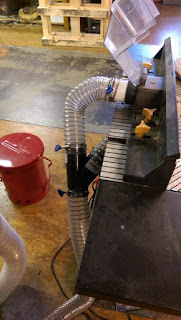 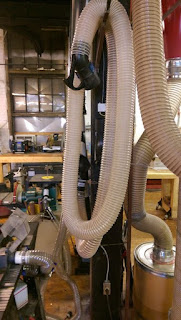 Ryan built the holder from raw materials at the Hive. Might be a little high, I’m waiting to see what other people think. Very easy to move.

So the first bonus is that with the vacuum attachment, we can actually attach it to the table saw dust port, and easily remove it when not in use. This results the trip hazard, and all it cost was a cheap plastic adapter! 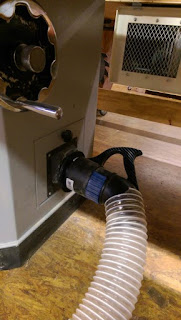 Second bonus is that I build a small chute from cardboard to keep the chips from the jointer from going everywhere. Since it’s Jim’s tool this is done on the super cheap, and only duct taped on. It can be easily removed if he’s not happy with it. If he’s okay with it, it might be nice to revisit it in cheap plywood with a magnetic mount to keep it in place. 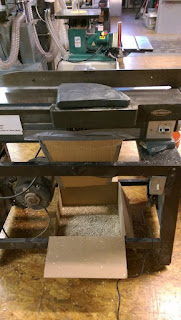 Whomever made that cool PVC adapter did some nifty machining.

Brad, I’m not sure who that mystery master of the machining magic might be, but he’s a total genius, and a very nice guy.

No problem, hopefully this addresses some of your concerns about what are getting that we don’t already have.

This isn’t the Dave you’re looking for.

Ah! I was just told “Dave” I keep forgetting there are two.

Two? Team Dave has dwindled, but I think we still have more might!
-D

Indeed, the Daves are a mighty yet secretive force. They have many agents where you least expect it.

I suspect the agents of Team John. BTW, Dave did you know that Ian is another form of John… Not sure I’ve trust Ian if I were you.