Alright, when does everyone plan on trying to put in some hours on the
space. I'd like to get in there and get something going on, even if
it's helping move things into the space. I have a few things I can
bring over w/o a truck currently though. I'm guessing for the time
being everything will be limited by the four key holders' schedules.

I have this Friday off, and I can always stop by the space directly
after work since I work right next to UC main campus (which is uber
close).

Hmm, is the phone line active in the space? If so, do we have the phone number? If not, what do we need to do to activate it?

I am off this Friday as well. I do have packing to do but some of that will be bringing stuff down to the space. I have a drafting table that is an old student one from DAAP. It just needs a top and a machine. I’ve got a light as well that is incandescent and Flourescent. I’d like to put it in the clean room so that it can be an obligate drawing surface.

I don’t believe it is active. There used to be DSL lines. Maybe we should call and see what cinci bell has has a phone/inet bundle option. Or just get inet and use voip.

That would be awesome! I have a 6 foot metal filing cabinet that I’m not using that I may bring down to stick in one of the offices to keep paperwork and stuff in. This weekend I will be dropping of a bunch of tech. I still haven’t gone through all my stuff at home yet to decide what all I’m going to donate. It depends on when I can borrow my fathers pickup truck as to when I’ll bring that stuff up.

We should probably have one desk and filing cabinet for “business/board” stuff only. That way physical paperwork like permits and inspections certificates can go there. I’ll try to get a list of emergency contact numbers together as well.

Hmmm…need to put together a crash bag for injury stuff. I’ll work on that.

Like Craig, I need to figure out what to donate to the space. But, I do have a pick-up and while my schedule may be crazy and all over the place, I would be happy to help move stuff to/from the Anchor.

Also 18th/19th are the dates the land lords are looking at to put up soundproofing. We need extra bodies to help. I got some feedback on who can attend on IRC (seems the 19th is working more than the 18th…) Let me know if anybody else can lend a hand in helping out getting this installed.

I presume that by “emergency contact numbers” you ment a list of /(|board)members/ to contact but I am fairly certain that having the Police, Fire and Poison Control numbers on the list would be helpful.

Who do we tweet in case of an emergency? 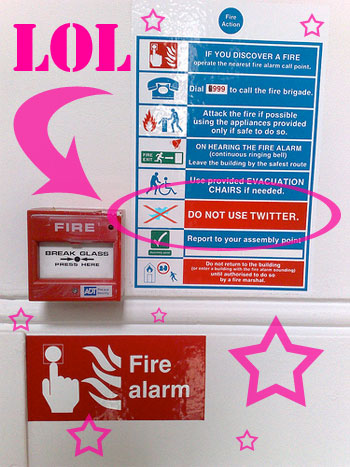 Has anyone else seen the british comedy show “The IT crowd” ? I have only seen a couple episodes, but in the one episode a fire starts in the IT room and one of the employees sends an email to the fire department because he can’t remember the emergency number (which was just changed from 999 to something ridiculous about 15 numbers long)

I have Season 1 and 2 on my server. Hilarious.

I'd like to get in some time in the near future to bring by a ton of
organization supplies (well, they're full of cables and parts at the
moment) as well as my tools that are clogging up my bedroom at the
moment. I just have to be let in, I think I can manage moving it by
myself.

I have a feeling that the space usage and layout is going to be a bit dynamic and possibly chaotic for the first few nonspecific-time-units. But I think that’s a good starting point.

And the eventual realm of the COO…

I think I've got all of season 3 now...one of my very favorites.