Since I'm assuming the expansion passed I'd like to see if there is a way we can keep CNC storage separate from the other storage. I asked Andrew if he would mind if it stayed until we knew what we were doing with the other space and he said he was throwing it out on the 1st if I didn't move it. I'm good with moving it, possibly to the new space if possible until something formal can be voted on. So I guess this is my proposal for a vote. There are many people that are starting to use the CNC and I think this would be convenient for everyone to have materials down there.

So, if we have the property might as well use it for something. I am curious on why a blank space is better than storage, if there is no use for that space currently why remove it?
Also when do we get official access to the new area?

Blank space can be filled with useful stuff, but storage space never goes away easily.

No just without storage space, we get sloppy. Sloppy leads to messes. Messes leads to chaos. Chaos leads Anger. Anger leads to the dark side. The Dark side lied there is no cookies…

I’m only asking that we find a way to make some room for this somewhere. With the new space this shouldn’t be difficult. I believe that with the new space we can accommodate everyone and the conversation on Andrew’s vote could have been different if we knew this was available.

Could you please clarify what you are proposing as a vote? I’m unclear from your wording what you are actually
requesting to do.

As of now, the next formal meeting at which the membership could vote on this proposal, whatever it is, would be Jan 3rd. Given that the membership has already voted to have it removed by Dec 31st I would recommend having it out of the space before then. If the membership wants it to return, and a vote to that effect passes, then you could always bring it back. As of now, however, our woodworking warden would be well within his rights to remove it on the 1st.

Small interjection: The lease on the new space will start on Feb 1st.

Did something change? I thought it was February 29th. 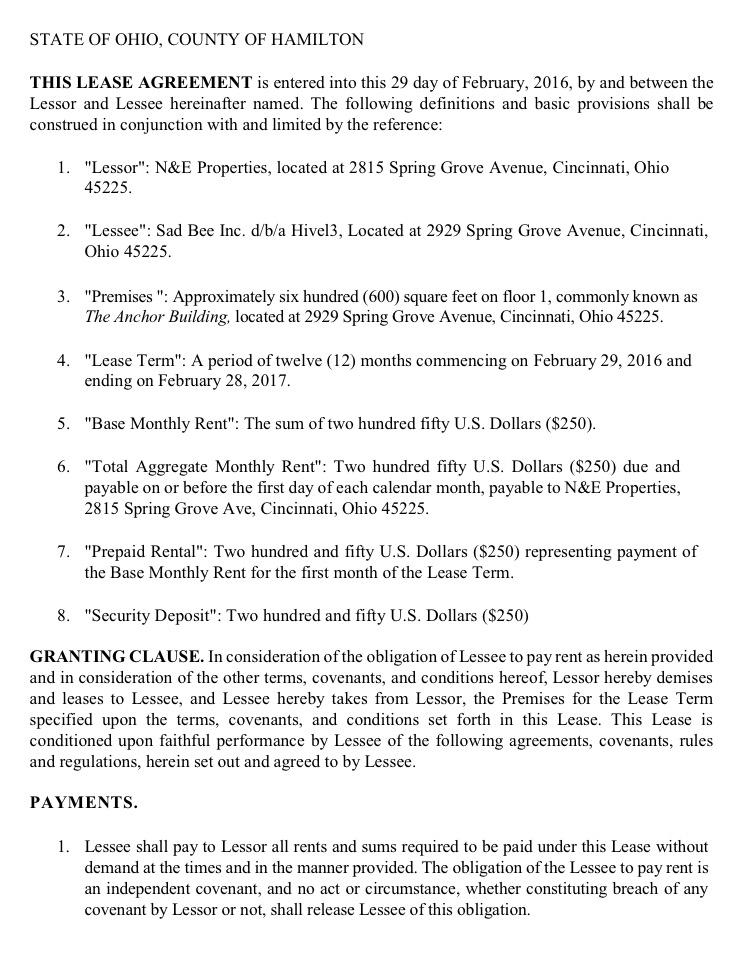 I think Jim, who has been working with them, said we could possibly go for Feb. 1st? I’m not sure on that, as we discussed it pretty briefly in the meeting. But regardless it will be in Feb sometime; Feb. 29th if we need to go by that document.

My apologies, I can't attend the Tuesday meetings although I do consistently review the weekly meetings on the wiki and the mailing list. I didn't see any mention of this on either altercation on either(maybe I overlooked it). But is there yet another location I am not looking where I can find this information, hopefully prior to the voting in the future?

Maybe a good point to note I do not see yesterday's meeting on the wiki as of yet.

I think you and I have different ideas about how useful empty space can be. Right now we have people literally tripping over tools in the wood shop in part because they’re so close. So empty space for working in, walking around, or assembling projects is very valuable. If you’ve been following the list, you’ve probably seen a few other things I’ve done to get more space in the woodshop, this is just part of that project.

Further we’ve got essential wood working tools that are effectively kept in storage that I would like to see in more permanent homes.

Finally, I think you’re confused, since we have the temporary project storage for people to store things in. We should have some more space in that after the 31st, or maybe a little earlier if I hear back from some people. Coy’s wood rack is his, and stores his plywood.

Sorry if this is short/confusing, I am heading to work so I don’t have enough time to make this response better, but I wanted to address it before the morning was over.

Regarding minutes: YAY! Thank you for reading them!! That’s awesome! Minutes for the weekly meeting are posted sometime before the next meeting. Sometimes that is directly after the meeting, and sometimes it takes the secretary (or whoever is taking minutes that night) more time to edit their jumbled writing/spelling errors/order/etc. and post a final, easy to read version, so they won’t be posted for a bit.

Also, because these are minutes and not a transcription, they do not record every single thing people say, but rather the highlights of large ideas; this means things said quickly, to the side, in personal conversations during the meeting, etc. will not always be recorded. The level of detail also depends on the style and speed of the person taking minutes that week. So some weeks it is much more detailed and others not so much. Neither is “right,” because that is just a matter of personal style and ability when taking minutes, and we appreciate anyone taking the minutes during a meeting.

On the vote: I’ve now run out of time to write this, boo.

Stay tuned for more when I get home tonight.

I personally would like to see a good sized cnc storage in the other room. Even with the plotter and vinyl cutting stuff to bring down sign board for events at makerfaire’s, libraries, and other venues. Then we have the whole people getting certified on the laser cutter and need for that. Coy has been very generous with people and taking care of them with awesome wood at a great price. I know I’m not on the official waiting list for storage due to my main focus being getting the metal room together and donations come December.

Lol between the holidays, my own car stuff, and having to get an ultrasound today the gallbladder might have to go lol…I have not been able to make it down much. I see both points being made and I hope a solution can be agreed upon because when I needed stuff for s project asap and didn’t have means of time to go get stuff coy stepped up as was extremely helpful. I guess it all comes down to how storage will go but if I even have to fab metal racks for storage to make it work out and everyone be happy I’m game.

I like the new wood storage system, I'd like to see more shelves with different sizes if the vote is to expand on this system and add additional sizes, shelves, etc then I vote yes.

I want to try and get a lot more flat wooden storage shelves - do we need another vote for that? I only ended up using like 600$ of the original budget for the pallet racks.

Since I will be running the meeting and responsible for doing the votes tonight, I’d like to know if this is going to be voted on today. There wasn’t a date given, so I’m unsure if I should go forward at this meeting.

Also, I’m not sure what to propose, or what we are voting on, as there were no specifics or tangible details.

I’d like to vote this evening. The vote is only about keeping CNC material storage. There are no specifics because it could be handled many different ways. I believe some people have varying opinions and I would rather that not stand in the way of passing initial vote.

So we are voting to overturn the previous affirmative vote of removing the CNC storage? Sorry I am confused.

Also, does this vote involve the new space?

I really don’t feel comfortable leading a vote that I don’t understand.

Yes, that is correct. Andrew’s main concern I believe was space. That was solved and he agreed to leave some stuff here until we could vote again. The new space could also be used for storage. Wood is quiet and doesn’t make much noise. People probably wouldn’t be getting it during quiet hours.

Okay, at the meeting, rephrasing the motion was suggested. I think it is best done in 5 separate motions. Here goes.

(1) Let there be re established, a flat storage for 4 x8 sheets of plywood, primarily for the cnc wood router, at some place at the Hive.

Second: Let a sub committee be established to examine the feasibility of modifying the undercarriage of the large cnc router to accommodate this use. Then implement the modifications within 90 days.

Third: Let the existing supply of boards be temporarily stored in overhead storage for a time period of not more than 90 days from the establishment of the sub committee.

Fourth: let a sub committee be established to word and submit a bylaw proposal that limits storage of items for sale by individual members, to the space afforded to membership storage boxes. Also, transfer the process of storage and sale of large items to hive owned materials, and under the management of the wardens as needed.

Fifth: Let the hive purchase all materials from members who have large items for sale, and assume management of the items as in number 4

I think that sums the concerns and issues, I did the measurements, adding a tray if you will to the large router will store the current overhead storage of boards in its entirety. Might have to rotate the machine towards the walkway to get them out… but it does have the capacity.