Heads up,
I'll be using the CNC Router this afternoon and into the evening.

Brad,
The auto zero tool wasn't performing properly. It kept acting like it was going to punch it through the board and I had to stop it.

Not sure if this was caused by the person running mach 3 before me who never closed the program. It took a couple of restarts before it work properly.

The wires and insulation on the zero tool have seen some wear in a few spots that have been taped. Any idea how you fixed it last time it punched through the spoil board?

It has been touchy for a while.
We can certainly check that the target cables are not cut/shorting.

I think there is an output screen where you can see all the output status. That way you can verify the system sees the contact closure when the tool touched the target without the risk of crashing.

Checking the cables would be a good place to start.

Also, I think that the

should light up when the probe circuit is closed.

(But I haven’t tried this myself, yet.) 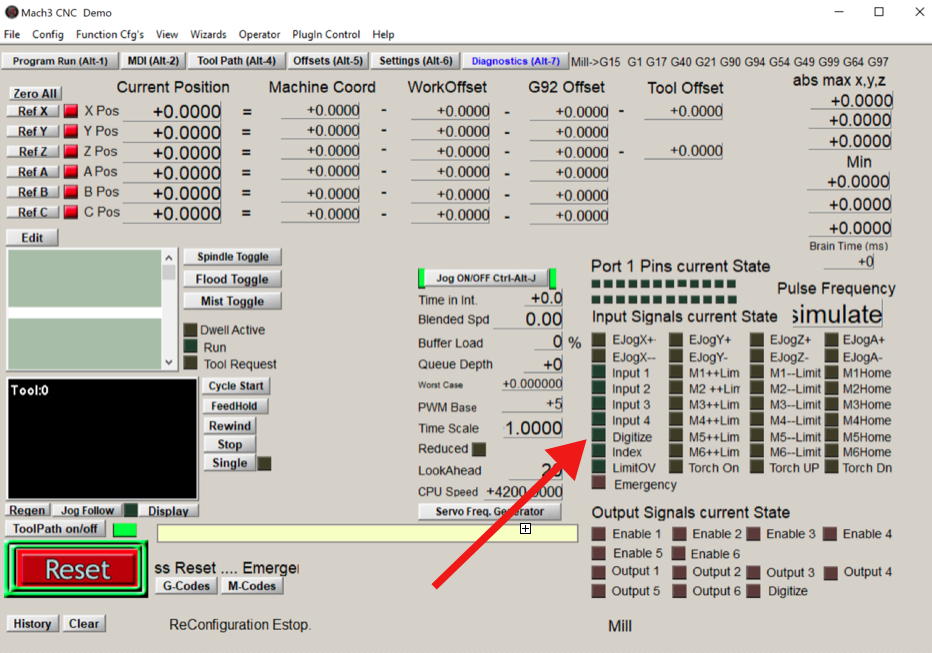 Today, I checked the continuity on the zero probe and found an open.
There were several splices in the line. The splices were replaced and the zero probe now does read.
Alt F7 Screen Digitize Indicator does show green when the circuit closes.

I’m thinking we should make a backup probe. Maybe with an armored cable.

Does Mach3 have a softstop feature set up to prevent complete crashiness? Since tool lengths vary, it may not be possible to prevent a mill hitting the bed, but do we have a sensor or soft stop to keep it from crashing the spindle? I hope so. Maybe it’s time we did a routine maintnenance / inspection on the big CNC so it doesn’t suffer the fate of the big laser…

You the man Dave.
Thank you sir!

I think this requires a limit switch at one end of the travel of an axis, because the machine doesn’t know where it is when it is first powered up.
A soft limit can tell it not to go any farther down the Z axis than, say 6" from the limit switch, but I think it has to know where to start from, to do that.

I think there is an upper limit switch.

Alternatively, one could visually set the “machine Z zero” before using the Z probe for any of the mills. (rather than installing a limit switch)

As long as the machine Z zero was set at the same place each time, this should avoid spoil board crashes (as it would give the machine a starting point for it’s soft Z limit).

One could abandon the Auto Tool Zero approach, and just zero each mill (which one has to do anyway)

I’d like to see the Z zero limit switch myself.

If there is, a soft limit should be do-able.

I believe this is done in the Config tab, under Homing/Limits, but I haven’t had the opportunity to try this, myself.