The new pinion gears arrived yesterday. Instead of oilite bearings, they have R8Z 1/2"x1 1/8"x5/16" Shielded Ball Bearing. They are clearly not as specified. Should I return them as defective?

As to fit. the kits add an 0.70" thick steel washer to separate the shoulder bolt from the mount plate. The shoulder bolt sticks out 0.15" from the side of the pinion all told there is 0.90 +/- between the washer and gear face. It all works for now and we can just install these gears.
OR make a little mod to extend the bearing life.
As soon as there is a little wear in the bearing the washer may spin against the outer bearing race. We could make a washer for the bolt end sized for the inner race and add an oilite thrust bearing that floats independently around the washer to hold the gear away from the plate.
Your inputs are appreciated.
At any rate, this repair needs to be scheduled. Several people have expressed interest in participating. Please let me know your availability and we can schedule this for an evening this week or Sunday 9/9. 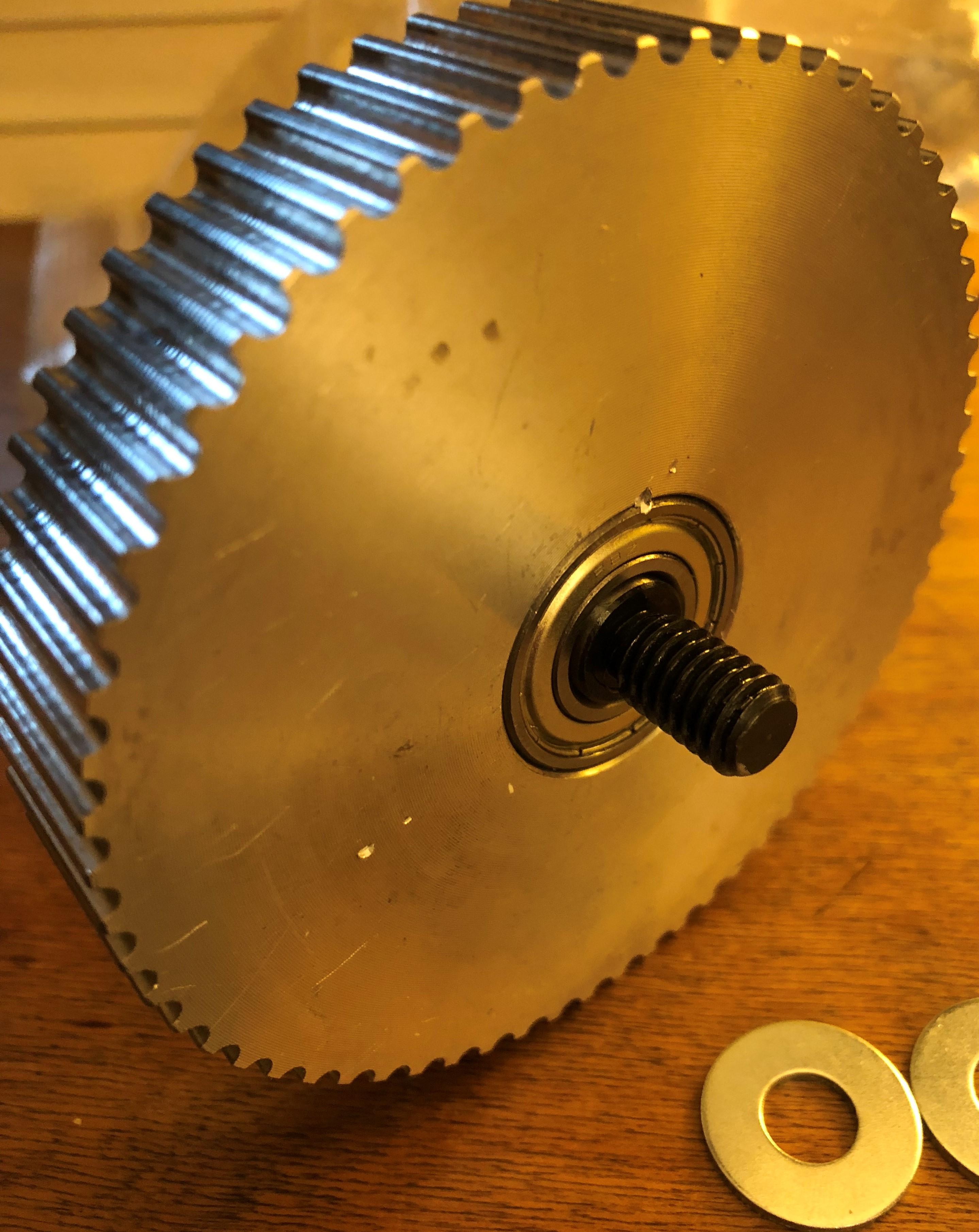 I’m not sure I follow your proposed thrust bearing arrangement… A sketch may help. with those bearings in there I am less inclined to think the thrust washer is necessary. any appreciable wear on one of those bearings would be quite surprising for the application… loads should be quite small compared to the bearing’s capacity.

I like the idea of Sunday better. That gives us the whole day to work on it rather than a week night evening(s).

Here is my concern with the bearing. It’s rated for radial loads. The shoulder bolt is subject to two bending moment forces, from the belt and pinion gear against the rack.
The concentric fit of the 0.5" ground bolt and the bearing is smoothly tight. My old school mechanical dial caliper measures both as 0.500" on the dot. On head end of the shoulder bolt the ID of the gear is 0.501 or so.
The ID of the gear floats on the length of the bolt with 0.15" play, so the bolt head doesn’t bear against the gear, except to keep it from coming off.

This means:
All the bending moment on the pinion gear from side forces is resisted by the bearing being tilted out of plane. and the ID of the steel gear against the shoulder bolt near the bolt head.
Gear rotation axis bending moments are not good for bearing life. The steel gear on bolt is what got us in this wear situation.

Choices.
a) Install it as is. Run it for a while and do preventive maintenance to grease regularly and check for bearing and gear wear.
b) add an oilite bushing to the steel pinion gear outboard near the bolt head. It would be something from the 1/2 inch ID family and their nominal ID is 0.5015" / 0.5025 so no real improvement there.
c) Add a thrust bushing to bear against the side of the gear matched to the hive made washer. Structure this to take out the shoulder screw end play and pull the gear face against the washer.
None of these are ideal.
In all cases Do keep just enough load on the tension spring to hold the pinion against the rack without deflecting the bolt gear assembly.

Probably go with a) - Kick the can down the road.
Dave

I’m confused. If the items came not as described, can’t you contact the seller and see about returning them for the correct items?

On one hand, Yes. Not to spec, therefore return.
On the other, we are left with choices between
1} leave it worn out
2) replace with new copy of the same gear that wore out
3) Use these gears

In theory a bearing beats an oilite bushing which is what was advertised. This design has my stated concerns.

Honestly just reach out to the guys at CNCRP and ask them about it. They are a highly respected company and I highly doubt they would make a change to a part without knowing it’s an improvement. Making a change to lower costs isn’t out if the question but I do not think they would do it knowing quality would suffer.

The ball bearing design is almost certainly an improvement. what we got is better than what we thought we ordered.

Dave, I assume there is a bearing on either end of the bore? If so, the pair can handle the moment just fine, it will simply be reacted as a couple pair of radial forces. The gears are not helical gears, so there will be no thrust load.