During the CNC router class this evening, the router started out working fine, but,
after several tool paths, it abruptly started making grindy noises and stopped moving on the X axis.

We re-homed it, but to no avail, so we shut it down and called class finished.
(We had already run a couple toolpaths, so the class was technically complete.)

I have seen the wood block on the gantry mess up axis movement. I'll investigate and get back to you.

Has someone erased the macro?

We had to zero the Z axis to the spoil board manually, with a sheet of paper.

Were you using the remote or the screen to start the Z probe?

Which profile are you using?

The remote/pendant doesn’t have such a macro (at the Hive) AFAIK.

We used the last one in the “Choose Profile” window, something like TestProfile1.

The software/CNC otherwise runs fine (except, see above) just the can’t get a response from the Auto Zero Tool button.

First walking in and turning on the machine. I took a quick look at sensors. I noticed right off the bat that the hall effect sensor is triggered although the spindle is no where near it. I honestly thought I would have to replace the sensor which I did get a spare of but, I wanted to do some testing first. As it was I clicked reset and tried to get the X axis to trigger the sensor, this test failed. Because I was running it while the sensor was already triggered duh right? 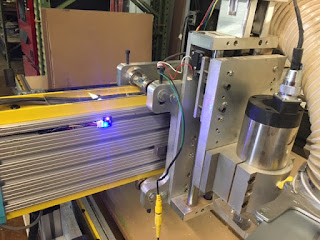 Next test, I wanted to auto the Z and again staying from it’s current location I proceeded to run the auto Z it would go down a very small amount and turn around without any interaction from me(not hitting the metal plate either), so clearly this has failed because it hasn’t hit anything and yet things the Z has been zeroed.

I wasn’t liking the current results of my previous tests but I needed some type of base line to work with, So next I just moved the Z manually(with the dongle), this works perfectly. I move it down and up several inches without fail. So I leave it down several inches and then I run the Auto Z tool again and it turns around right when it hit the plate rumbling sound gone(on the reverse). What was different? only the Z axis had been altered since the previous test. 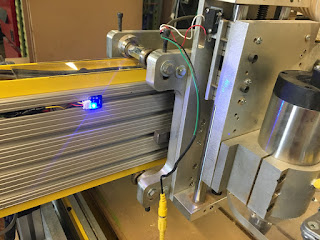 The sensor is no longer triggered for the gantry.

I was manually triggering the Z axis stop sensor and it triggers the led on the X axis.

So when trying to “Ref All Home” if the any of the sensors are triggered they are all(maybe just these two, I dunno I didn’t wire it lol) triggered and will not properly “ref all home”.

John,
Does it sound like it was one of these two scenarios, which appear to have either been caused by the Z axis sensor being triggered because the Z axis what near it’s maximum prior to running the tests?

( I don’t think the Z axis responded to kybd or remote, but don’t recall)

Moved gantry (via kybd) out of the way and pressed Stop to kill grindy noise.

I managed to get the auto zero to work but only when starting the auto tool away from the top of it’s path. When I approached the machine and tried to run the auto tool it was say “1/2” from the top maybe only “1/4” but the macro goes up 1.5 inches after zeroing out and with the sensor triggered it immediately would just go straight up after a brief moment(because it thinks that it has been triggered).

X motion wouldn’t respond to Ref All Home, keyboard or pendant/remote, leaving the router in the middle of the gantry span, not at either end

Was the reset light button blinking in mach 3?
Was the Z height all the way up?
Was the X axis all the way to the left?

I did experience the problems I noted before but didn’t experience any other issues. I’ll be in on Sunday probably around noonish, I’d be happy to investigate further if you can demonstrate the problems.

X motion wouldn’t respond to Ref All Home, keyboard or pendant/remote, leaving the router in the middle of the gantry span, not at either end

Was the reset light button blinking in mach 3? No. (else, the gantry wouldn’t have moved on the Y axis.)

Was the Z height all the way up? It’s possible that the mill was too high when trying to Auto Zero Tool, as this CNC router has a shorter Z travel than I’m used to.

Was the X axis all the way to the left? No. (as noted above, it was in the middle of the span)

Sorry, can’t make it Sunday. Will keep in mind the short Z travel.

Thanks for your comments & your interest.