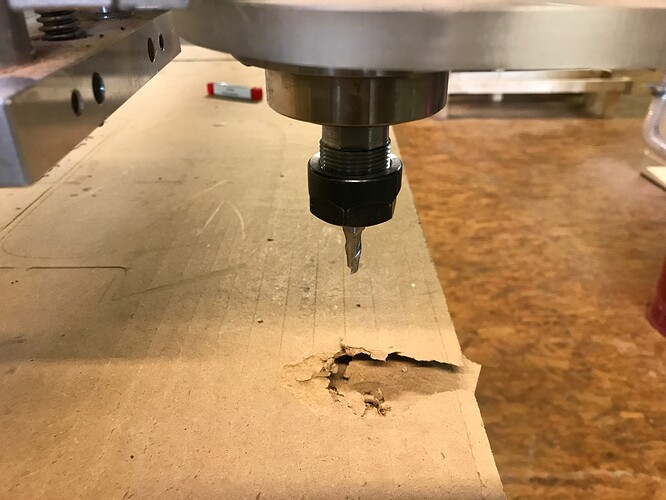 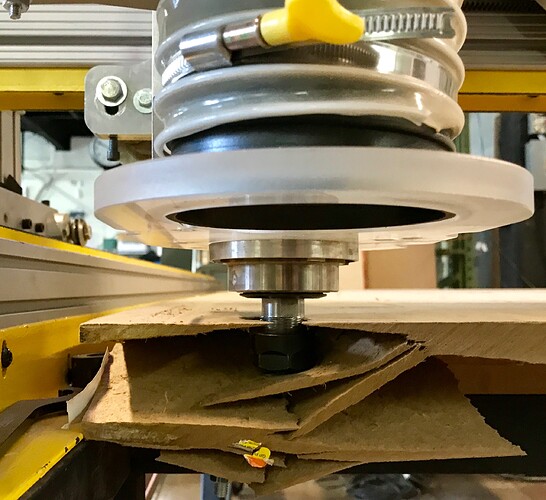 I don’t think it’s supposed to look like that

I had a really nice description of what happened but my phone decided to just send the attachments.

I was trying to use the auto tool zero but it would not do anything. Then when I removed the metal block to go to the electronic bench to check continuity, the CNC decided to plow into the center of the earth.
Luckily it happened at 0, 0 so it just cliped the far corner of the overhang spoil board.

Lesson for me, do not walk away from the CNC unless you pull the estop or shut it down at the computer. I think it was waiting for me to turn my back.

Everything seems to be functioning now I don’t think anything was damaged other than the spoil board. Need to find out why the auto tool zero isn’t working though.

When the CNC first came online I remember it spontaneously “forgetting” where the auto-z pin is on smooth-stepper. It was traceable simply by following the docs…

Speaking of which, I think it would be a LOT easier to service these machines if we had schematics, PCB docs, etc printed out in a binder or something by the machines. The wiki is neat and everything, but when you’re in the guts of something with 5 different schematic sources, paper is good.

Oh, and just remembered that John notified everyone via mthis list a couple CNC classes ago of the auto-z not working and the need to use paper method.

When I took the class with John the auto Z was working. He also showed us the paper method.

Something is not working right. I’ll be happy to take a look at it next time I’m down there.
I also wasn’t sure which profile to use, there are quite a few.

Yes I think the auto zero routine is looking for something. Isn’t it just a contact closure when the bit touches the block?
I don’t think there are any “smarts” in the block.
It never started going down. Screen said something about probe present.
Separate from the crash. That was just weird. The head traversed to (0,0) then plowed into the spoilboard.

I am wondering if its one of the profiles, I think I saw the pins turned off for every single thing on one of them.

Perhaps we can have a default profile identified.
I think I was using “Test profile 1” which was the one John had s use. (I could be mistaken)

Played with the CNC tonight after the meeting.
Using the “Big CNC” profile and the auto tool zero worked.

I did have another weird thing where I could not enter the speed of the spindle.
I would type in 12000, hit enter, then press F5. The spindle would just spin all the way up to 24000.
Mach 3 showed the spindle speed in the entry box and seemed to accept it.
I did press the green button on the VFD.
I ran a test at 24000 and it seemed to work fine.
We need to identify the best profile to use and somehow have that posted on the monitor bezel or something.

Been out of town on family business.

“Big CNC” has had problems in the past with spinning the spindle all the way up and not allowing changes to the Speed via Mach3.

“TestProfile 1” has been working in the meantime.

There have been intermittant problem with the Z-zero probe detection routine, which is why I documented (and instructed students in) the
“paper, no Z probe” approach to Z zeroing.

I agree we should have a well-named, tested Profile in the list, “Profile 8May2017” for example.
Then we can just use the most recently dated Profile on starting up of Mach3.

Finally, thanks to all who continue to note and correct bugs in the system (er, I refer to the CNC hardware & software…)

Oh, and I will be out of town until early June.

Cool.
Thanks John for the reply.
I’m going down to the Hive to work on the PTDR for a bit. I’ll see if I can test out TestProfile 1 and see if it works.

Perhaps rename it to the date like you suggested.

I’ll look into replacing the spoilboard. wonder if I can just replace a section?

Obviously, one needs to balance the size of the replacement v. the position of the damage.

A bigger replacement results is a flatter spoil board, but a smallish, peripheral area of damage
could use a small replacement and leave most of the sp. bd. as is and still (mostly) flat without too much effort.

Lorin was at the Hive yesterday and said that he had gone through the
profile named "Tim" something and to try it out.
I was able to adjust the spindle speed with this profile.
I'll try and take a look after the Tuesday meeting, if we can settle on a
"good" profile we can copy and rename it to something with the date.

See you in June!