I will be running a class on "How To Solder". This is a basic
introductory course to teach individuals who have never picked up a
soldering iron how to solder, or to get people up to speed who don't
feel like they're any good at it. This class is focused on basic
through-hole soldering, not surface mount.

This class has an entrance fee, which is used to pay for your kit. We
will be building the MintyBoost 2.0 Charger (
http://www.adafruit.com/index.php?main_page=product_info&cPath=10&products_id=14
) in this class. The kit has everything in it to build the basic
circuit.

What is *NOT* included in the fee: Soldering Iron, Solder,
Rechargeable Batteries, Altoids Tin. These are all on your own, but we
*should* have enough soldering irons floating around for people to be
able to get their hands on one. Also not included in the price is
extra components in case you fry one, but I am intending on trying to
get extras of a couple of the components in case this happens (mainly
the electrolytic capacitor).

Tuesday, May 4th is the deadline to get your money in. The cost is 20
dollars each. Please do not order the kits yourself, as there is a
discount for multiple kits that will be used to pay for the shipping
and handling. Money should be given either to myself on any Tuesday
meeting, or to Craig.

I would be interested in the class and will see about getting you the monday next tuesday.

Also of note, it is not a standard Altoids tin, it is the “Altoids Gum” tin, I will see if I can find a box of them at Sams or something.

I was thinking about going to Gamestop or Target to see if I can find
one of those novelty GameConsole gift card container thingies. I've
seen some that look like the nintendo controller that would look neat.
Don't remember where I saw them at tho

Good idea. I picked up a mini wii controller candy dispenser at Walgreens over the Christmas holidays. I’ll use that if there’s room.

Awesome!! I’d love to have a makerbotted “tin” with the Hive13 Logo on the top. How cool would that be, eh? Can that be part of the MintyBoost kit?

i'll gladly trade my minty tin for a hive13 "tin"

I'll try to make one next time I get a chance...

I think you got this (the 3d part) but let me know if you want help on the modeling side of things.

Spiffy. Can well-behaved strangers attend if they pay the fee by may
4?
Been searching hive13.org but i can't find if non-members are
forbidden in short term classes.

there was talk about there not being a cap on attendees at the tuesday
meeting, so unless i am mistaken you guys are welcome, james please
correct me if i missed something due to my short atten... look a
kitty!

the point of the fee is to order the kit, and the point of the
deadline is to get a bulk order in to cover the cost of shipping and
handling, so please get your fee in to james.

ALSO: the makerbotted "tin" is the size of an actual altoids mints
tin, the mintyboost kit is for an altoids gum tin which is closer in
size to a pair of AA batteries. it's not a big deal, but i thought i
should mention it.

here's the two side by side: 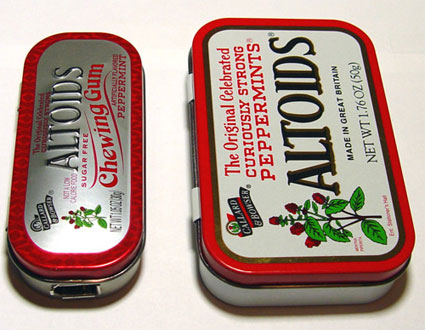 one project i would like to take in the distant future is a battery
and charger that can be scaled up in size from the minty. between my
wife, my kids, and myself, we have an arsenal of little portable
gadgets that we plug in at night (phones, mp3 players, bluetooth
things, nintendo DSes, etc.) which are all basically 5v DC. it would
be great to have portable/luggable battery that could be hooked to a
DC power source to charge up and used to charge our gizmos, like a car
when traveling or a solar panel/wind tubine when at home. it would be
even better if a larger device could charge up laptop or two as well.

It’s too bad we don’t have a good blender resource that could modify the files to reflect the gum container.

What’s the deadline for getting you the money James? I get back from my trip tomorrow and should be able to get you payment then.

The printed Altoids "tin" is designed to be used with this variation
on the Minty circuit called "MintyXL":

I may build one of those if I have time. I won't be able to make it
to the soldering class since I'll be out of town.

I printed the bottom of the Altoids tin last night, but held off on
printing the top in case anyone wants to create a version with a logo
or something.

I could use one of these on my trip. I’m at the Vegas convention center all day and then hope on the red-eye tonight. I doubt my phone is going to make the trip on one charge. I guess I’ll sleep instead of listening to music.

Don’t know if everyone has seen but it would appear that Wrigleys is killing the Altoid gum line: