Caution: Drunken monkeys in the Hive!

Apparently there is a band of drunken monkeys running around the Hive and they had a party on the workbench. 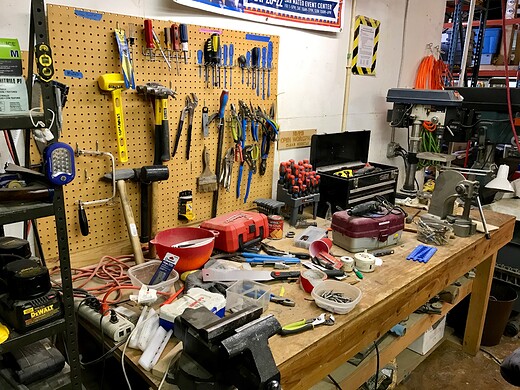 There wasn’t even a “project” on the workbench, just scattered tools and stuff.

We’re thinking of mounting a webcam to watch just this workbench, and if it is left in this state again the main doors will seal and the dust collection system will be run in reverse to flood the Hive with ultra fine sawdust.

Or maybe we can setup a wire mesh imbedded in the workbench and if more than a certain amount of material is left for a certain time we will electrify the whole area. That way when we come back the next day someone will be stuck there convulsing . . . .

The area should be cleaned up after use like below: 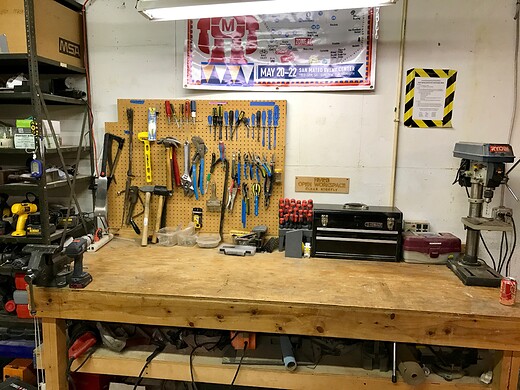 i second camera. I think i may even have an unused tilt and swivel IP cam sitting on a shelf…
d 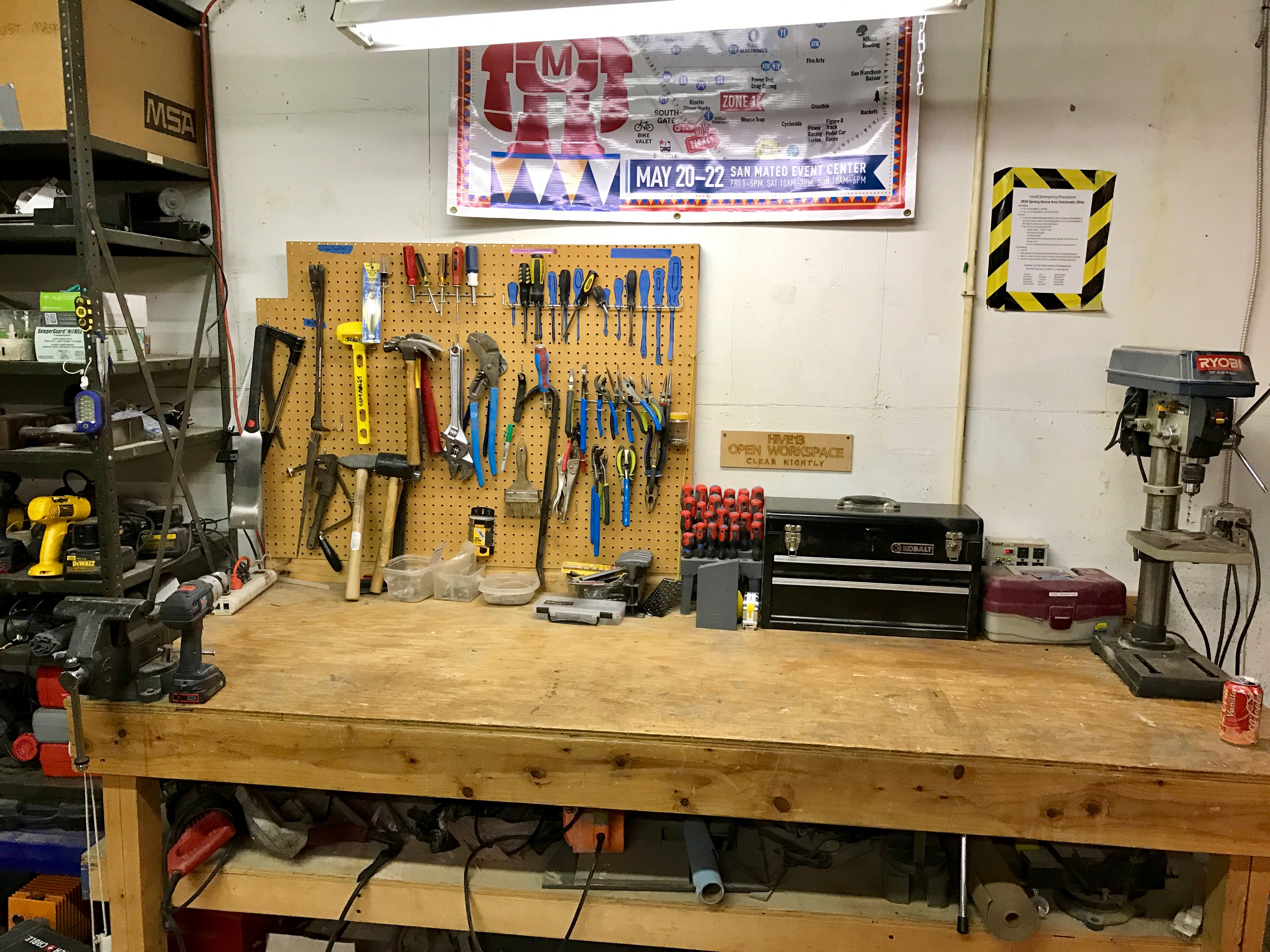 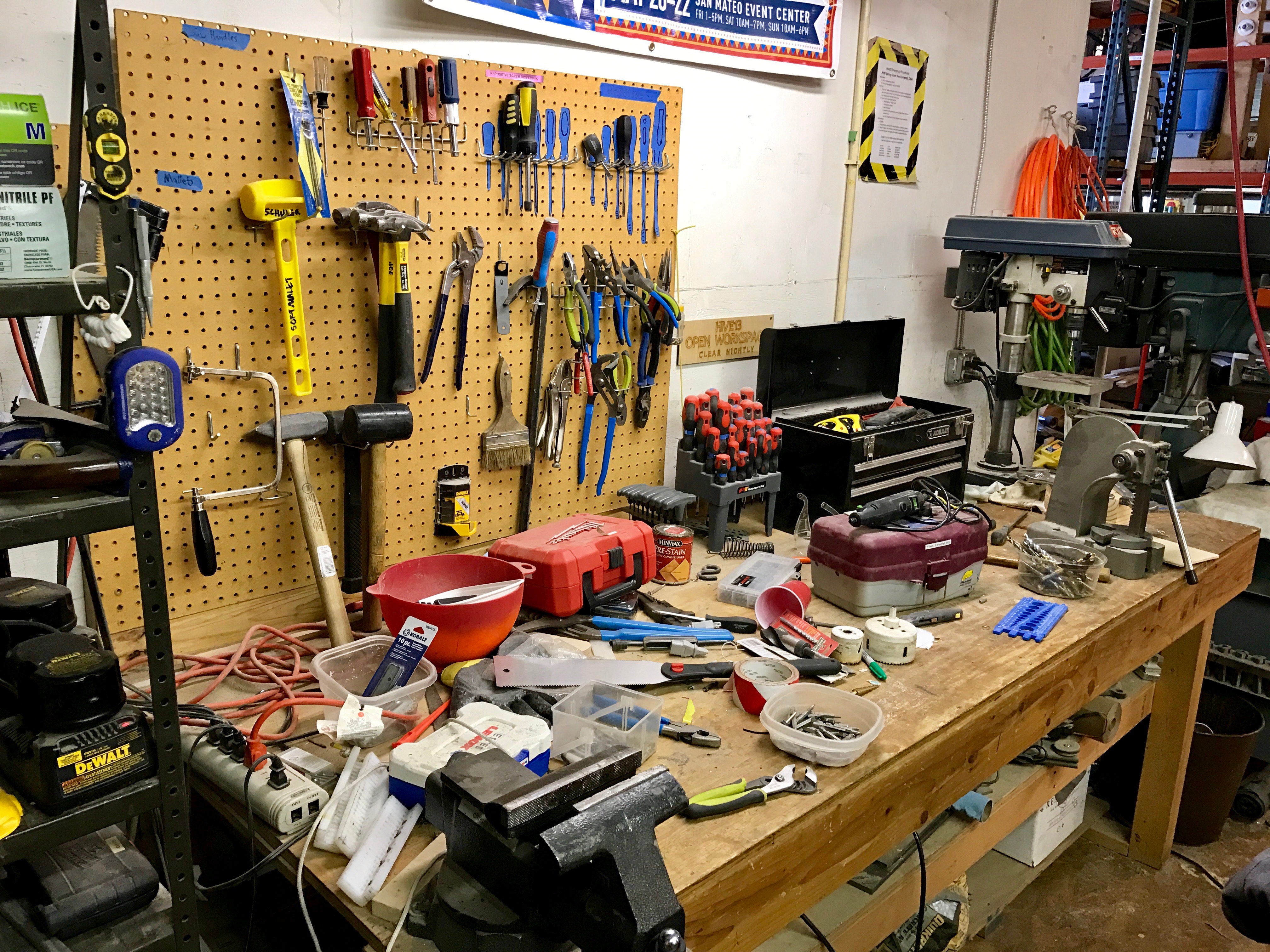 Solo cup gives it away doesn’t it?

I can see the pics Tiffany, maybe you’re not one of Brad’s super special, uber duber, bestestest friends.

Holy crap… I should have my hida scan and other crap all scheduled as the ultrasound didn’t show any results. I wish I could come down and put work in and help out with crap like that but lifting and bending over are dort of a no go right now

. I just wish they would go in take the gallbladder out and see physically what’s going on lol. Thanks for taking care of that as well as the others lately that have stepped up huge. Someone should own up to this and buy this man some camp Washington.

I’ve put the main camera on the workbench, maybe we can get the CTO to rename it the “shame camera”?

We have a name!

Ummm… alternatively we could point that camera back where it was because it is the only camera we had looking at the front door. Just a thought.

Or we could add a few more?

I don’t have a problem with the idea of adding new cameras. I do have a problem with people moving our current cameras around on a whim. They are set up as they are for a reason, and having a camera pointed at our front door has proven to be wise on several occasions.

Whim’s a bit strong. We’re joking around a bit, but really it would be nice to have people take more responsibility for the mess in small tools. Moving the camera to show the current state might help with that.

I’m not seeing any advantage to any particular configuration of cameras when things occasionally walk off anyway. Further we have the RFID reader to “watch” the front door.

That may have come out more angry than I intended it, and for that I apologize. I was merely explaining my reasoning for moving it back. Nevertheless, however my point stands. The cameras are a security feature of the space and should not simply be moved without asking. I am not going to go into specifics, but there have been several occasions when we have been glad to have a camera pointed at the front door.

As I said, I have no problem with the idea of adding additional cameras. Particularly in potentially accident prone areas where people tend to work alone (i.e. the metal room). I was in fact already planning to bring up the idea of upgrading our current camera system due to recent incidents in front of the building. I’ll bring it up again in a couple weeks after I have had a chance to assess the capacity of our current setup and estimate how much it will cost to upgrade and/or replace.

That may have come out more angry than I intended it, and for that I apologize.

I didn’t take it as such, just wanted to also be clear about the underlying tone involved. I’ll move it back next time I’m down.

As I said, I have no problem with the idea of adding additional cameras. Particularly in potentially accident prone areas where people tend to work alone (i.e. the metal room). I was in fact already planning to bring up the idea of upgrading our current camera system due to recent incidents in front of the building. I’ll bring it up again in a couple weeks after I have had a chance to assess the capacity of our current setup and estimate how much it will cost to upgrade and/or replace.

Sounds excellent. I agree on a camera in the metal room, maybe we can get a panorama camera for watching the small tools, back door. Also maybe one for the back corner of the woodshop.

I keep wanting our local park to install the harbor freight system that goes on sale. I think it is 4 cameras, wireless for under a grand. Of course, the install and the connections and the fiddly bits are extra… but I think the costs have come way way down. The more equipment that goes in, the more security people are going to want.

Procedures wise, it might be giant pia, but maybe people need sign in/sign out various areas… but, metrics of hrs/use, number of users, hrs worked overall… would be neat to see the stats.

one long term plan that has been suggested has been to have some of the more expensive or complicated (read dangerous) pieces of equipment RFID enabled/controlled. That would serve to ensure that the users are trained as well as help monitor usage etc. Again, that has been suggested for years but the implementation has always been the lagging portion. Cheers.

Seems like we could at least lock down the mach 3 controller on the big CNC via user name/password combos.

I advocate wired cameras. Not wireless… better overall for price/etc. And can’t be jammed easily ( like some of the cheaper wireless )
I think wired cameras can also be powered off the network cable, right? So you don’t have to find and run power to the camera.

Keeping up with Username/passwords will be a chore I am sure alot of people dont want to undertake. Keeping up with the lists for Trained users on any item has always been a failing at the hive. RFID may work, but then is also going to be a challenge to keep up to date, and potentially easy to bypass.