Can anyone give me advice on a good outdoor camera set up for home security.
A few requirements :

I’d have is I would prefer hardwired, but not mandatory, just normally lower cost.
Something that can be hooked up to a Doorbell camera with microphone and camera (i am only finding WiFi versions and doesn’t specify if they can be hooked up to am dvr system)°
up to at least 8 channels
motion sensor DVR
night recording
good quality recording but doesn’t need to be HD

Having problems in the neigborhood, or are you wanting to figure out if it’s raccoons or possums getting into your trash?

Set it up now and not have to worry later.
No problems, but why does Indian hill houses have cameras? Better safe than sorry.

some people have stuff to protect - or feel they need to… other people have other ways One that records would be kinda neat to go see what sorts of stuff goes on around your place when you aren’t home…
You’ll probably want to spend a bit more on some of the cameras (get ones with better low light/night performance) and put those in strategic places.

get a few of these and set them to fire a warning shot first if anyone comes within a certain distance of the sides and back of the house…(evil grin) let’s be proactive!

I can lend you some security that is surely to deter…I even prepackaged them from ww2 bolt action with bayonet for zombie intruders, shotguns for that creepy birds movie (the zombie birds that shit on cars and eat people), and Ar/AK stuff in case a foreign country is attacking. My wife also is keen to attack stingrays if needed lol. Sorry to make a joke out of something that might not be funny but hopefully all is better for you with the cameras…if you need any help holler. 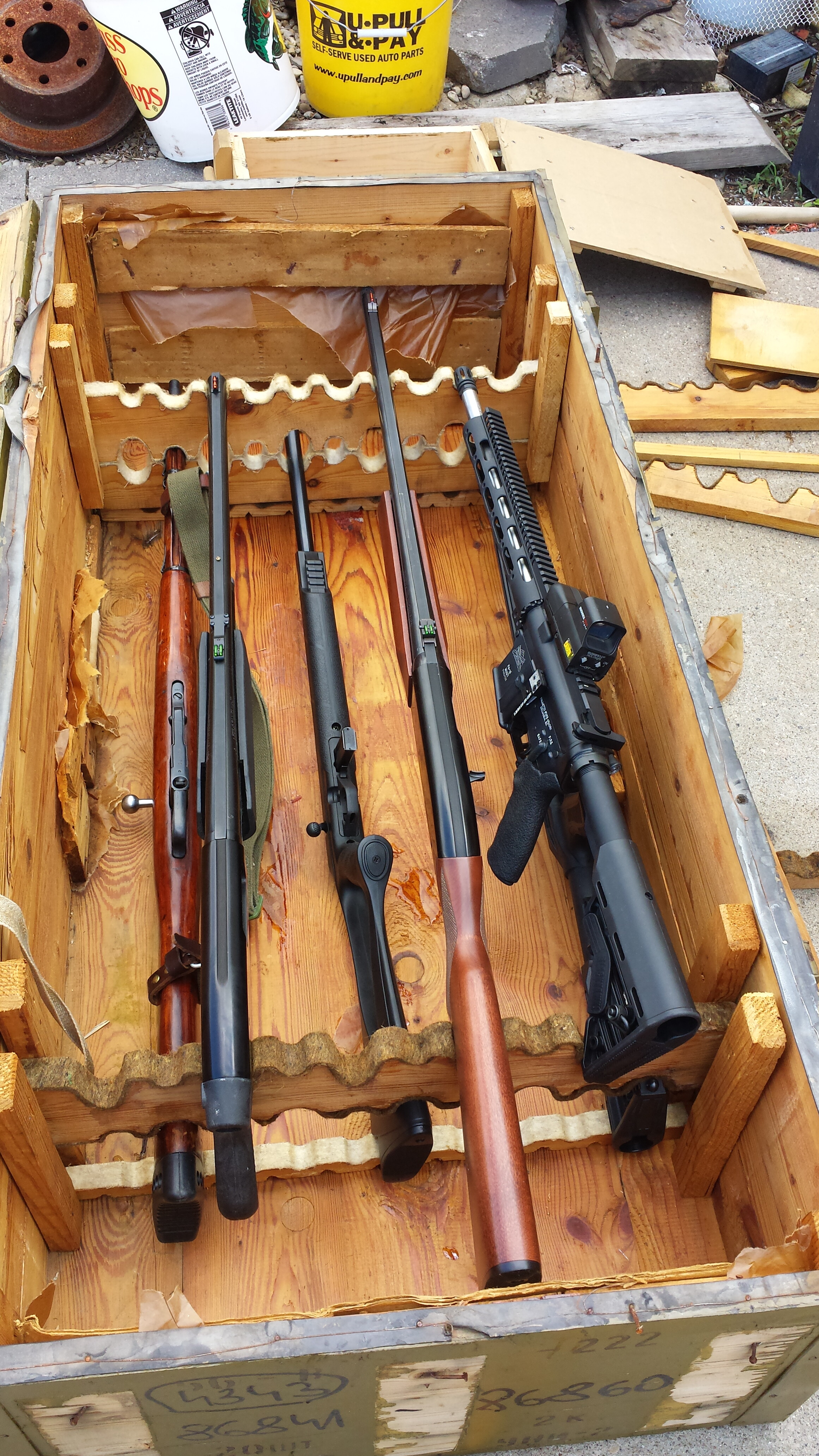 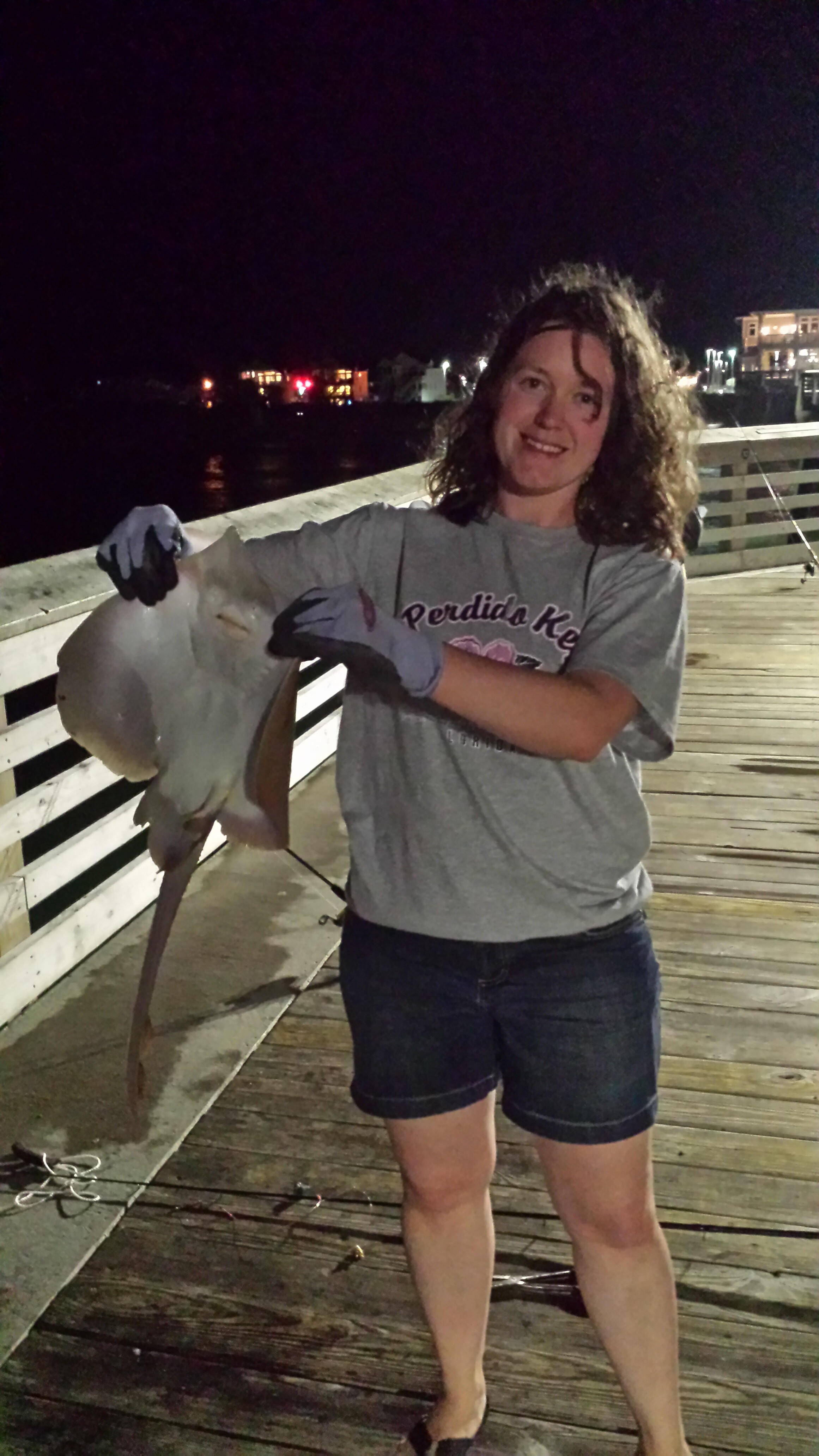 I am in the same boat for getting a camera system…not a security system. I’m thinking of building my own. Very similar requirements as Daniel as I am in a 3 story town home but I can see an alley and a parking lot from my 2nd and 3rd story as well. So what I was thinking was some type of raspberry pi with ZoneMinder + plugins for license plate recognition (ALPR) and facial recognition. Not necessary to know who the person is but to know if the system has seen the person before. Same for the license plate…mainly for anomaly detection, although there is a state API site to query if warrants are out or if a vehicle is stolen…

Anyhow, the processing wouldn’t be on the camera but back at an internal server. The goal would be that for movement that is “known” only record a few pictures every so often but for any movement that can’t be identified as “normal” record HD. This would cut down on disk usage plus I should have some really interesting data to comb through.

Has any one built a custom system before or have suggestions of good, flexible outdoor cameras that could suit this purpose?

Craig that’s basically the same, beyond the recognition software, which would be cool to add.

We put together a small setup using 3 of these POE foscams, powered by a small POE switch

and using http://blueirissoftware.com/ purchased the full package, and it runs on a cheap pc… the PC though is running hot… i know its struggling but other than that, it took a while to setup, but so far so good.

One of the guys we work with installed all this in his house and he has no complaints with it. We just ran the wiring for him while he did the setup.

Oh nice! I’m going to grab one of those cameras and hook it up to ZoneMinder to see how it does. It looks like a good fit and a good price.

So I just got around to setting up the Foscam I got. No beuno.

The phone app requires a lot of permissions for no reason and requires you create an account on their site. It has horrible reviews by others as well. I skipped installing it after reading the reviews and looking at the permissions list.

So I then went the networking route. Plugged it in and checked my network. It didn’t register a DNS name which is unfortunate but fine, I simply scanned port 88 via nmap to find it. The default login is admin with no password…fine…however you can’t login without downloading their plugin. So with my Chrome on Linux I clicked on the download plugin and it prompted me to download a 32 bit windows EXE for IE. Needless to say I didn’t do that.

So just for shits and giggles I put in the CD that came with it and fired up wine. Yes, I don’t own a windows machine but it’s a PoE webcam, right!!! The software runs fine in wine and can find the camera and pull a stream. It can’t update the password on the camera though. And uses it’s own password (for the app, stored in clear text in the fsIPC.db (sqlite3) database in its home dir)… I put it in a 3 story window facing a parking lot. It seems cars, etc…but no way it could do license plate or facial recognition, my main goal for the device. You can identify the color and type of vehicle and basic people doing things but it can’t do the resolution that I need to actually identify something. 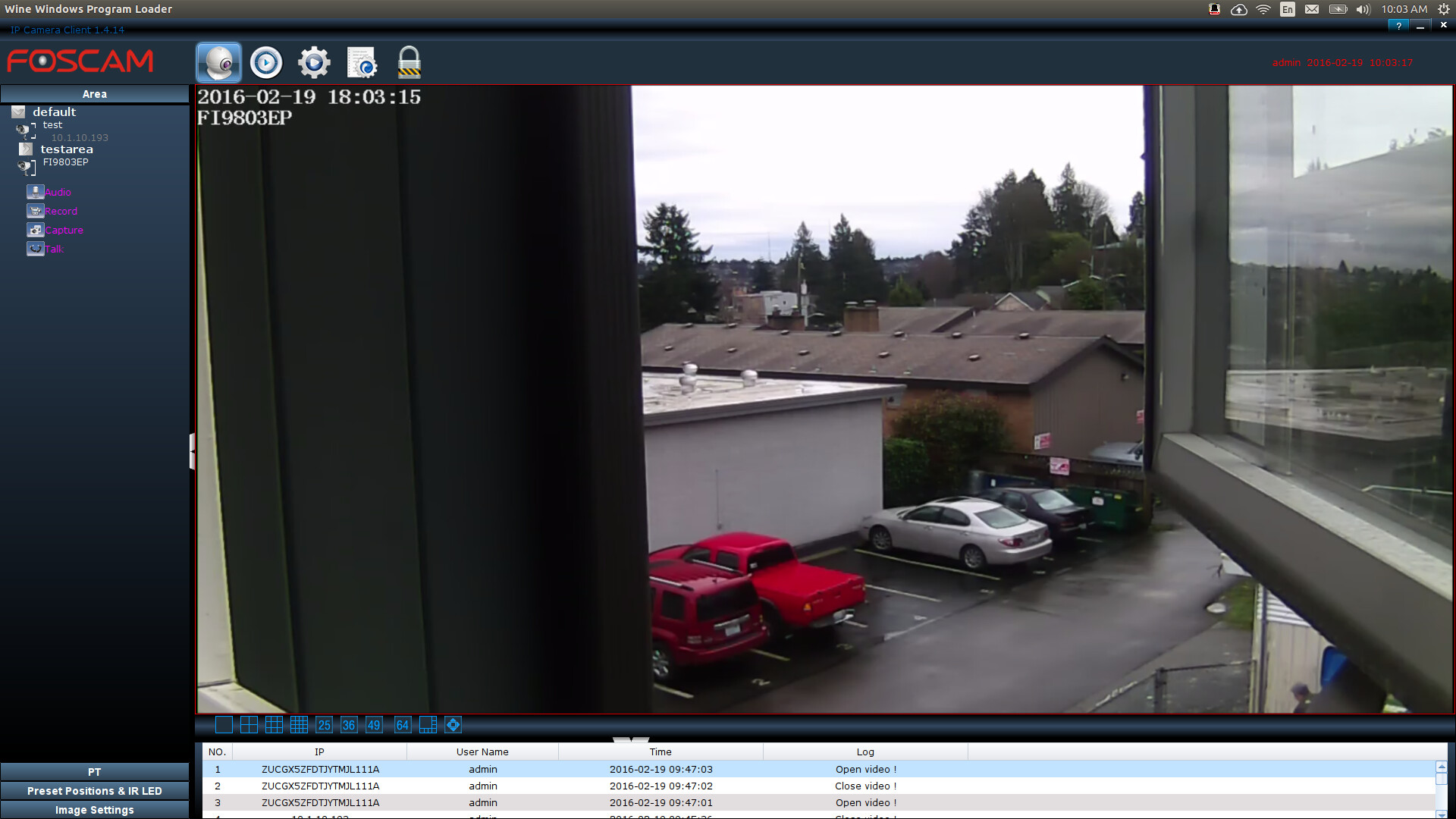 If you zoom into the image the license plates are totally white. Technically there is a person’s head in the lower right corner but I doubt you can even make out their race. I haven’t tried to put it into zoneMinder yet. I imagine it will be able to pull images but I’m worried about the actual security of this security camera. I wasn’t expecting anything great (I know all about the Foscam baby monitors) but I really needed better quality.

I also decided to put up a sniffer on the router. And it turns out this camera sends packets out to foreign servers as well. It sent UDP packets to:

This is not the complete list. In the UDP packet it contains the ascii text “Charnie ip-u”. Responses from these servers contained the same payload. It has other traffic such as NTP but that’s to be expected. I didn’t see any picture frames sent out on the net, so that’s a good sign. I did find this in their forums http://foscam.us/forum/why-is-my-foscam-contacting-remote-servers-t17738.html Unfortunately the result from foscam is you must have something enabled. However, myself and others on the forum have disabled all we can in the interface and it still does this. No answer that I can find for the 10001 port messages that foscam is using.

Krebs wrote about this exact thing this week: http://krebsonsecurity.com/2016/02/this-is-why-people-fear-the-internet-of-things/

Wow, you are right. That article is dead on. Thanks for sharing that, it did open up at least the concept of the p2p stuff I was seeing…No way I’m going to use that camera but good info there.

Wow… I had no idea all that was going on behind the scenes… since we were not doing the actual network setup of all the cameras I didn’t give it a second thought.

Sorry about recommending a questionable product, from my side of the physical installation, everything went smooth.