I went to use the Grizzly Spindle Sander yesterday, and learned that the Arbor is seized in the spindle. Likely someone in the past didn’t realize that the threads are left hand threads, and severely over tightened the spindle. The wrench flats on the Spindle also showed signs of having been gripped with channel lock pliers instead of using an open end wrench, and the corners have started to round out.

I tried for about an hour to get the arbor free of the spindle. I tried letting penetrating oil soak in, heating the arbor with a heat gun a chilling the spindle with ice, and using cheater bars on the wrenches, but the two parts seem to be permanently a single part.

The parts breakdown for the sander is listed here: http://cdn0.grizzly.com/partslists/g0529_pl.pdf

I’d like to propose we order a replacement Spindle and 5/8" arbor so that we can easily swap arbors and use the 1/4" arbor. And while the thing is taken apart, it would be smart to replace the two bearings on the spindle, as they are currently in pretty rough shape, and grind some when turned by hand.

Total, with shipping from Grizzly’s warehouse in Missouri, would be $66.74

It would also probably be a good idea to get some high quality anti-seize to put on the Arbor and Spindle threads to prevent future seizures (I can probably snag some from work).

Thanks for digging into this. Might be a good idea to put a “Left hand threads” sign on the sander with a pic of the spindle. Maybe paint the place where you put the wrench red, so people understand.

We can purchase these parts using the area warden budget so no vote is necessary.

How is that purchase done or who can do it? I don’t mind doing the install work once we have the parts.

Basically we put it on the purchase spreadsheet (to keep track of how much stuff we buy) and Greg buys the parts.

I’ll put the stuff on today and remind Greg Tuesday.

Before Ordering, we may want to do a quick assessment of the other Arbors/Spindles, A few of them were missing the keys, compression washers, and left hand nuts I think. Might as well order all of the missing parts at the same time (probably only a few dollars worth, but saves the shipping to order it together).

Sure. Let’s take a look Tuesday night after the meeting.

Not related to the spindle sander, but can we add some band saw blades to the purchase list? The resaw blade that has been on it was completely toast, started burning after about 1/16" of an inch into a 2.5" piece of cherry I tried to resaw.

I put the open curve cut blade that was on the pole on the saw and it would cut, but also burned enough to not want to use it.

A brand new curve cut blade is on the saw now, and it cuts great, but it is the last blade left in the hive that I could find.

I think it would be a good idea to get 2 resaw blades and 2 curve cutting blades so they are available for people to swap out when a blade starts to get dull.

I also adjusted the upper and lower guide blocks and bearings and the table 90 degree stop, so the saw is cutting nice and true now as well.

Thanks Brad and Dave and everyone else for the help trying to get the spindle sander repaired today.

For those who were not involved, we get it appartments and the new parts installed, but there were two more bad bearings that I hadn't expected to be bad.

Unfortunately, the parts breakdown appears to have some errors, and the bearings we need are not listed. They should be on the bottom of the item labeled (4) in the explosion. However, item (4) is also mislabeled in the parts list as being one of the spindles.

I'll call tomorrow and try to get the right part number for those bearings. 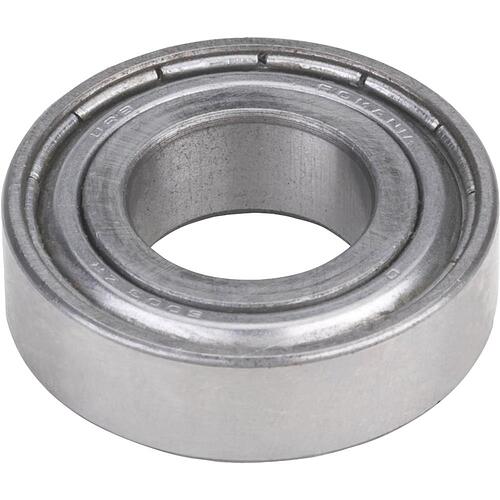 This high quality router bit bearing stands up to heavy use and can be used with other manufacturer's bits. Some of our bits can use different size bearings so check this out carefully.

I think that is the bearing we need (Qty. 2), however I have not called and confirmed. If someone is at the hive today, could you measure the bearings that are in the bag with the spur gear shaft to confirm they are 35mm X 17 mm ?

I confirmed, the bearings I linked above are the ones we need to replace. Can someone with the power please order two of them?

I added them to the warden purchasing spreadsheet.