Saw an add in Facebook for this and thought it would be a good discussion starter for a cnc plasma cutter. Beyond what I’ve read online I have no experience with these but they seem like they could add alot to the hive. This isnt so much about this specific product but the idea of a cnc metal cutting tool.

There was a vote against a plasma cutter on July 10, 2018. The negative vote was based not on the virtue of a plasma cutter or it’s cost.
Rather it was the cost and amount of work required bring the room up to fire code ‘hot room’ standards. Fire code requires fire rated drywall on all floors, ceiling and walls.
‘Hot Room’ fire rating is easy in a concrete industrial building, tough in an old wooden mixed use building like ours.

Please re-read that thoughtful discussion (of which you were a participant).

Whether hand held or cnc a plasma cutter it raises the risk of fire too high for a wooden building with residences separated by non-fire rated walls immediately above the hot room.
For all these unchanged reasons, I vote no again.

Uh Dave this wasnt a vote… this is a discussion, as it states in the subject line. So I am not sure what you are voting on? Having a discussion, thats not really a thing we vote on, unless something has changed and i been kept in the dark.
I did happen to look over that conversation at your request, (my participation on that was my vote nothing more, for clarification.) But that discussion also mentioned and I quote " Sounds like it truly is necessary for the Hive to get a solid plan together for the future of metalworking capabilities " So we have waited now over 6 months. Lets talk!

We have discussed the possibility that a CNC plasma table would be more manageable than a hand torch, though it couldn’t be one like that. it would need to be one that has a water bath below the cut and good shrouding to keep splatter contained. something like this one would be a start, though we would still need to add some additional enclosure and dedicated fume extraction to make it reasonably safe for Hive13 conditions.

While there is a group that would definitely support this effort at some point, my guess is that there will be HEAVY pushback due to safety concerns and the shear number of other ongoing projects we have ATM. We need to get the glasswork, worktables, sheet metal brake, box and pan brake, welding tables, shapeoko, big mill and surface grinder all in place and happily coexisting before we consider another large(ish) machine. ~6 months from now may be a reasonable time to start discussing the next big purchase/project, in my opinion.

If you are feeling good about being the driver for such a project, I’d suggest putting heavy research into the safety implications and what we would need to do in addition to just buying a machine to mitigate fire risks and make everyone comfortable with it being in Hive13, as well as present several options for where it would live. I do think this would be viable, it’s just a matter of doing the right prep-work and presenting everything up front before going to vote.

Sorry, meant to include this link when I said “Something like this one:” 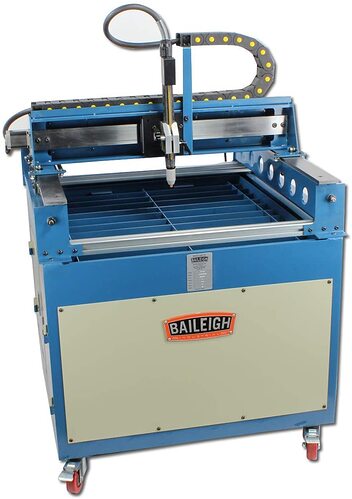 The Baileigh PT-22 plasma table is not your normal 2'x2' plasma cutting table. The PT-22 comes fully assembled, no need to spend hours building, hoping to have the alignment correct. A water bath is also part of the package, not an upgrade. Another...

Daniel, Your response comes across like you feel personally attacked and that is definitely not Dave’s style.

Dave’s point was that a lot of people want access to a Plasma Cutter. I’ve been looking at personally getting one. But the idea was shotdown not due to lack of interest, but because the practicality of making it happen. So the time talking about devices to get is wasted time until we have dealt with the issues of why the idea blocked last time as, Kevin also said.

There are a lot of projects going on, and I don’t think anyone currently involved in those projects will be looking at new projects anytime soon. But as Kevin said, if you want to take on finding a solution to the issues brought up last time, you’ll have my full support. I don’t think you are involved in any of the current projects at the hive and you may be able to get a few other people involved that have time available to get a team working on it as well. That would be awesome. Full stop. If you were to find a solution to how we could make it happen, that would be awesome.

I’ll share any information I have, and state that what seemed like the most likely solution was exploring if we may be able to expand into the basement. Concrete floors, Stone walls, and lots of open space would allow for a lot of options. But that would be more cost, so we’d need more income/members/donations,etc. That was what seemed most logical to me, during the last discussion. But if you find workable alternatives and a plan, people will be very interested in hearing them.

Just to clarify, I am enthusiastically in support of figuring out how to make a plasma table work for Hive13. I am more than willing to help put the effort into it and make it happen, but I don’t think we have the bandwidth to coordinate it with everything else at the moment.

100%, if you take the lead to put together the “proposal” for how we can make it work, I think that would be great. I’ll do my best to offer productive input to whatever is put forward.

FWIW, I have friends that have CNC plasmas here in town if you need anything cut in the meantime. The guys across the street hooked me up with some great water jet work, too.
-Dave